On Opening Day for Major League Baseball's 2016 season, there's still hope for the sport once considered America's pastime. Beset by scandal and facing exciting rival sports, baseball is again seeking to recapture its past glory, with a focus on future players and young fans, with an assist from veterans who played the game the way it should have been played.

Growing up, baseball was the sport for me. I collected baseball cards when I was nine, thrilled to get Atlanta Braves outfielder Dale Murphy and Cincinnati Reds second baseman Joe Morgan in the same pack! My first major league game I followed came a year later on a trip to California, where the highlight came watching an A's game against the Boston Red Sox, with Rickey Henderson, Carl Yastrzemski, Tony Perez, and Carlton Fisk. By age 14, my dad and grandpa snagged me tickets in Detroit to see the Tigers beat the Padres to clinch the World Series. It was my favorite sport to play, and I just knew I'd be a lifelong fan.

Little did we know that in the following years, steroids, gambling and a host of other scandals would strike out baseball. Money on all sides seemed to reign, with little regard to the fans. It became harder and harder to even see the game, much less meet a player or catch the occasional ball that made its way into the stands. Baseball definitely lost its aura.

Now that I have a son, I wondered what he'd grow up interested in. Would it be baseball, or the glitzier games of football and basketball, with a more exciting product on the field or court? Would it be new sports like the X-games, with thrilling videogame tie-ins? Or would he follow in his dad's footsteps, hoping to reconnect with a game that once defined America?

In baseball-crazy Georgia, it's not too hard to get excited about the sport. Some of that is due to the small-town community spirit, but some is also driven by the Atlanta Braves. It was once thought it was due to their long postseason run, where they made the playoffs from 1991 to 2005. But that baseball excitement has persisted, even grown, as the team's success leveled off.

Trying to recapture the magic, the Braves swapped prospects for expensive free agents. But despite a few playoff appearances, the team seemed to hit a wall. Now they've gone back to their roots, focusing on developing young players with an eye for the future.

As the season opens, it's the last year in Turner Field, a spectacular stadium built during the 1996 Olympics, with a stunning view of downtown, and remaining one of my favorites. With the loss of the big-named free agents, and their home for almost 20 years, there's a real concern that the fans may not respond. What's a team to do?

The Atlanta Braves may have solved it by making the game and team more accessible to fans. Earlier this year, the team hosted a FanFest, where kids and adults could come to run around on the field, engage in a number of kid-friendly activities, and even meet the players. I took my eight-year-old son and a friend of his to get autographs, pose for pictures, and even ask questions, like whether travel-ball or traditional recreation leagues would be better for him in the development of skills. It's not every day you get to shake All-Star Freddie Freeman's hand, or meet a famous veteran.

While waiting in line for autographed baseballs and posters, I spotted Terry Pendleton, the 1991 National League MVP for Atlanta (which started the great postseason run) who serves as a coach for the team. I saw his baseball card and remarked "I wish I had thought to bring my card for you to sign." He smiled and replied "You can have mine!" Then he autographed it. I swear I became a wide-eyed eight-year-old again. 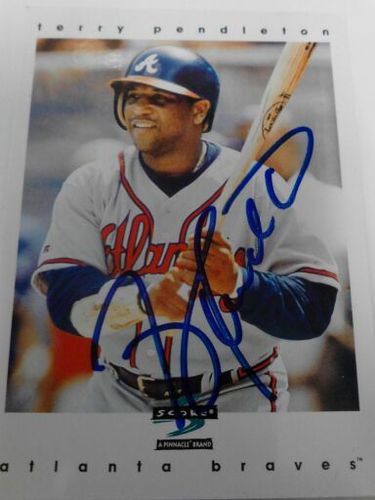 Sure my son will have a hard time pronouncing names like Ozzie Albies and Mike Foltynewicz. It may be a few games or seasons before we see Danny Burawa, Andrew Thurman, Ian Krol, Evan Philips, or Mallex Smith. But I just know when they call one of those players, like Lucas Sims, my son's going to yell out "Hey...I met him! He showed me how to throw a ball." 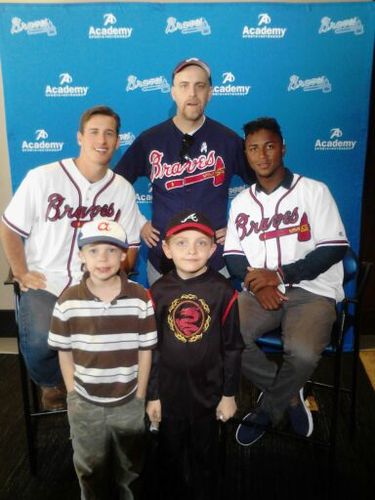 And sitting next to him is my daughter, four years older, who loves going to Braves games so much she tried out and made the school softball team, even though reading and Dr. Who are her two biggest pastimes. The team's fan-friendly approach to the game won her over.

As Terence Mann, played by James Earl Jones, opines in the film Field of Dreams

"The one constant through all the years, Ray, has been baseball. America has rolled by like an army of steamrollers. It's been erased like a blackboard, rebuilt, and erased again. But baseball has marked the time. This field, this game, is a part of our past, Ray. It reminds us of all that once was good, and it could be again."

Across America, the Braves and other teams are starting to get back to basics in winning over the fans. And as Atlanta has shown, the sport still has a chance, and a bright future, so long as it learns from the past.