The holidays are intended to be a time for renewal and hope, but in a political season that's already topsy turvy for a number of reasons, many of us enter the holidays with lots of complex feelings. Regardless of how you feel about last month's elections, there is a lot of uncertainty and many unanswered questions as a new Administration prepares to enter the White House.

For the Filipino Veterans Recognition and Education Project, where I serve proudly on its Executive Committee, we choose to take this holiday season as an opportunity to celebrate the Congress' passage of the Filipino Veterans of World War II Congressional Gold Medal Act and to be thankful for everyone who made this moment possible. On November 30, the House of Representatives joined the Senate and passed this historic bill, which will ensure the lasting legacy of the brave Filipino soldiers of WWII who fought under U.S. command and were responsible for holding the line against enemy forces, playing a critical role in achieving final victory in the Pacific theater. 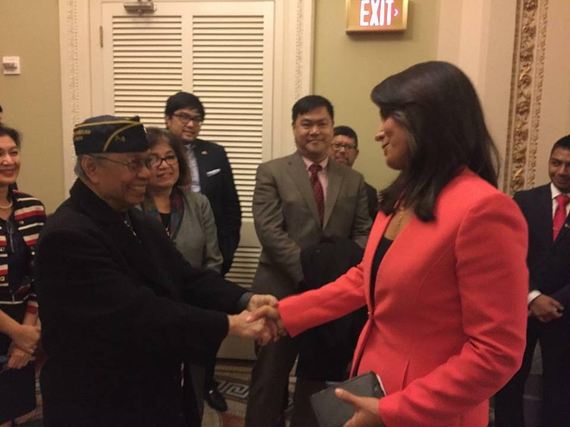 This bill's passage is particularly poignant, occurring as it does on the cusp of the 75th anniversary of the attack on Pearl Harbor. December 7, 1941, literally by proclamation of President Franklin Delano Roosevelt, has become "a day which will live in infamy." While we now remember the bombing of Pearl Harbor as the catalyst that moved the United States to take military action in WWII and the seismic impact that would have on world events, his words at the time were as much performative as they were descriptive- by saying it will live in infamy, he wanted to make it so.

While we remember the opening of his speech and the phrase "a day which will live in infamy," we don't remember that the President went on to enumerate the acts of aggression beyond Pearl Harbor that built the argument for the United States to enter the war. Bombings across the Pacific were listed in a trail of destruction that ultimately became too devastating to ignore.

Included in that list that remains largely unremembered, was the Philippines. Our history books do not sufficiently tell the full story of the soldiers, American and Filipino, who fought in the Philippines. While World War II movies remind us of the Bataan Death March (and even the Raid at Cabanatuan in 2005's "The Great Raid"), we don't remember that after the war, the 1946 Rescission Act proactively took away these soldiers' status as U.S. veterans, effectively saying to them that their service didn't matter.

This Congressional Gold Medal marks a significant opportunity to right this wrong, at least by correcting the record and making sure their stories get told. To be Filipino American is often to be told that your history doesn't count. That while Filipinos taught the world what People's Power meant and the power of non-violent protest, what's more important to remember are Imelda Marcos' shoes. That while we honor Cesar Chavez and the emergence of the United Farmworkers movement, we don't have enough nuance to remember the Filipino farmworkers like Larry Itliong and Philip Vera Cruz who first started the worker's strike that brought Chavez to prominence.

So this holiday season then, and in this moment as we note the 75th anniversary of Pearl Harbor and Manila, we take the passage of the Congressional Gold Medal Act and look for President Obama's final signature to make it official. This holiday season then, we take note of the outpouring of support from the Senate, the House of Representatives, and of countless volunteers, advocates, and leaders who put the Filipino WWII veterans front and center to get this legislation passed. But most importantly, this holiday season, we hold the veterans and their families a little closer in our hearts and recommit ourselves to making sure their lives and their legacies are made even more meaningful.

From the Filipino Veterans Recognition and Education Project, from our families to yours- Happy Holidays! 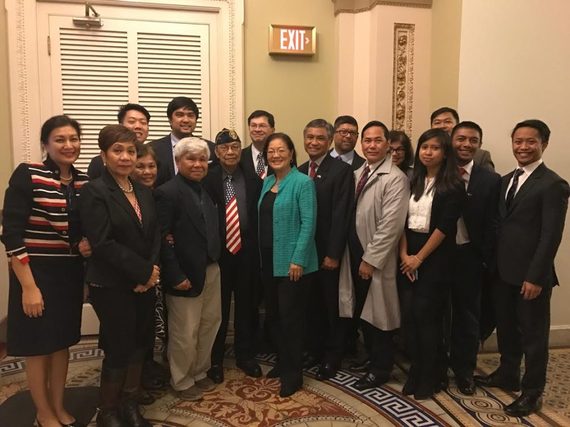 The Filipino Veterans Recognition and Education Project is a nonpartisan, community-based, all-volunteer national initiative whose mission is to raise awareness through academic research and public information and obtain national recognition of Filipino and Filipino-American WWII Soldiers across the United States and Philippines for their wartime service to the U.S. and the Philippines from July 1941 to December 1946.

For more information, and to find out how to donate and show your support for the veterans this holiday season, visit our web site: www.filvetrep.org. You can also find us on Facebook, Twitter, and Instagram.