What kind of artwork gets the most response online? In the era of Instagram, where successful art careers are literally manufactured through the massive accumulation of 'followers', this is not a subject for idle speculation. And for the students in my experimental new class, Making Art in the Internet Age, it is a very pressing issue. I'm grading them on the number of 'Likes' they accumulate over the course of the semester. Their homework assignment for this week was to come up with five elements that make for a successful Instagram post.

Social media has become a marvelous tool for the individual artist. Never before has so much control over the dissemination of one's artwork been placed in the artist's own hands. For the purposes of career expansion, networking or discovering other artists, sites like Instagram are spectacular. As a platform for learning about art in depth, appreciating complex works, or even viewing an artwork carefully, Instagram fails just as spectacularly.

With its limited formatting, and the viewer's inability to 'zoom-in' on images, certain kinds of work are going to be preferred over others on Instagram. A multi-figure piece, for example, shrinks down to the size of a playing card, and much is lost. A single head portrait, on the other hand, gains through the limits of the medium. Subtle and tactile painting effects are lost to digital photography anyway, but further reduce that to the demands of a phone screen and you are no longer talking about the same issues in art that I learned about in the pre-digital dark ages. Art in the Internet Age is an entirely new animal. 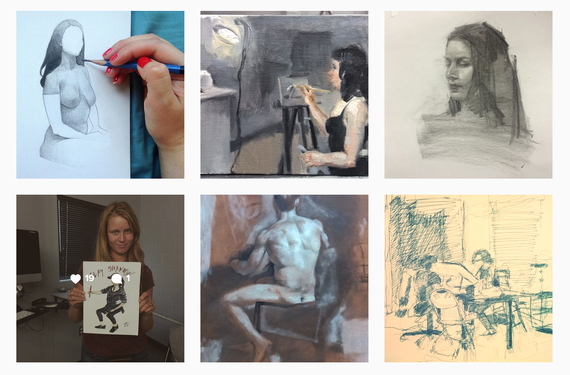 Sample of the daily student posts found on Instagram, #hessmaia

Last week in the introductory class talk I went through a quick history of technology, and suggested that the smartphone is the first human invention that is fundamentally changing the nature of who we are as human beings. Studies show that it changes brain patterns, has decreased our capacity to concentrate, but also makes us better multi-taskers. Everywhere I go I marvel at the number of people on their phones, mesmerized, addicted, lost to their surroundings. This utterly dominant technology is changing everything, and to think it will not alter the nature of contemporary art seems to be head-in-the-sand denial.

Visual artists of my generation made art for 'the wall', or the museum space. Art was an object you confronted in the flesh, and appreciated the physical properties as part of the content. If I ask my followers on Instagram if they know my work, they'd say yes. But how many have actually seen one of my paintings? A very small percentage. Art today is encountered on a screen. My top-notch screen experts (the students in my class) came up with some intel that made the parameters of this new paradigm more evident. 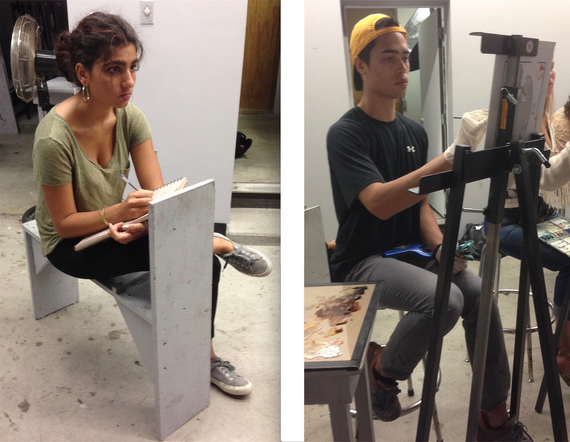 Yalda & Charlie at work in their Making Art in the Internet Age class at Laguna College of Art + Design.

@charlieantolin said, "Posts should be eye-catching. As the attention span of humankind decreases it is important to tailor our images to the changing audience. As people scroll down their Instagram feed it is likely that they will not notice the subtlety in your work." @yalda_sepahpour stressed simplicity. Your compositions should be simple, easily read, and stand out because of that. She also felt constantly posting was important, that your feed should be fresh and changing, and that the quality of your reproductions was critical. 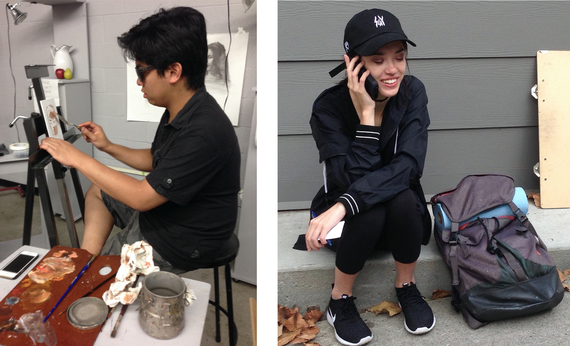 Justin painting from life & Shannon waiting for class to begin.

However, a recurring theme was the unfinished post. @justin_tecson20 thought that portrait and figurative works did especially well, but posts did even better if the works were shown being worked on. His charcoal sketches in-progress got a better response than finished drawings. @shannonfody suggested that people responded better to these in-progress shots if they were casual, not slickly professional. When I expressed surprise, @averipaints, our MFA guest of the day, thought it had to do with the nature of social media, the sharing of transient experience versus the finished product of artistic creation.

@pottaytertots, who does a fair amount of plein-air painting, stated, "I think it is necessary to have what you painted visible in the background so it is clear to the viewer that you did it from life." She thought it helped to tag the location you are painting in as well, that people relate to your whereabouts and it makes you more of a real human as opposed to an online avatar. 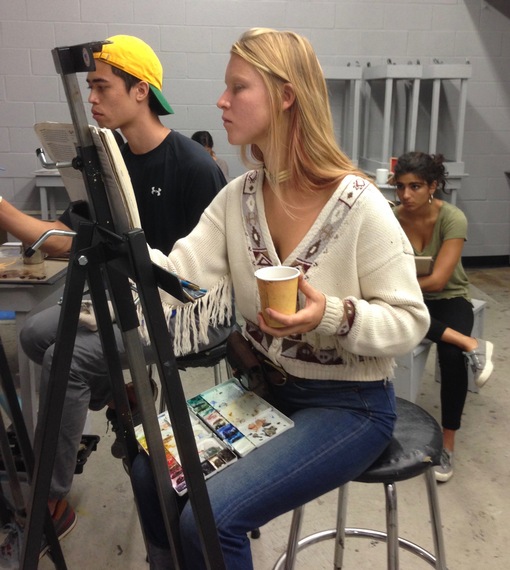 Charlie, Taylor (aka @pottaytertots), and Yalda working from life.

Talent, as expressed through skill, also came up in the discussion. People like to see work that is well done, but it was also admitted that there are plenty of very popular amateurs on Instagram whose success puzzled the entire class. Shannon felt that drawings on Instagram were more popular than paintings because more of the audience practice drawing. She also thought that art involving females, whether nude or not, made for popular posts. I have noticed that posts of my classes at work, that feature a cute gal with brush in hand, do very well. It is the old adage that 'sex sells', but on social media steroids. 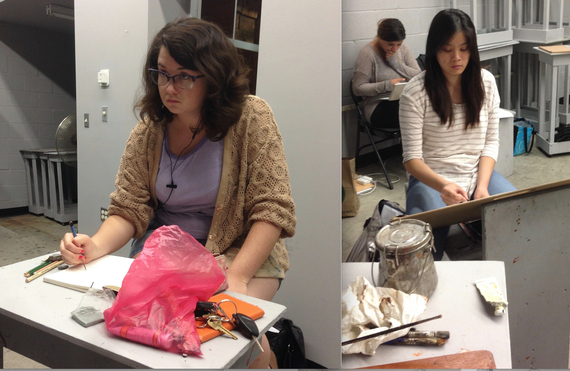 The most thorough analysis of the day came from @ninaulett. She downloaded an app that allowed her to pick out the top nine posts from five favorite Instagram stars. In terms of aesthetic, Nina found that "Instagram has a sort of preferred look, which tends to be high key but still contrasted, and cool yet saturated imagery. Among the sample images, most were either neutral or cool toned and were fairly graphic. Also each artist's most popular images tended to stay within a specific color pallet. With the artists I sampled, it appeared that blues and oranges were the most popular combination."

I learned things I didn't know from my social media experts, and perhaps it will change my approach to Instagram. I'm a stubborn ol' cuss though, and those elements of art that I learned were important forty or fifty years ago ain't gonna die easy. This new technological platform fascinates me, though, and I will continue to blog my class experience here. You can check out the class posts on Instagram at #hessmaia. And since my poor charges are being graded on 'Likes', like everything you see and follow them all!