Behind the curtain was a small booth. In the booth was a man.
He was pulling levers and talking into a microphone. He was
the one making the head of Oz talk! Oz was not a real Wizard at all!
--The Wizard of Oz: A Novelization

As I watched Donald Trump bellow his victory speech at his gaudy Las Vegas hotel earlier this week, I couldn't help but think that I had encountered a shtick like this somewhere before. It's a feeling of déjà vu that I've had consistently during his campaign.

With his yellowed cotton-candy hair, orange spray-tanned glow and blowhard rhetoric riddled with promises he cannot and will not keep, Trump's appearance was quite literally cartoonish -- a visual of absurdity drowned in Technicolor hues. "We won with poorly educated," he intoned, forgetting, as he often does, the proper article. "I love the poorly educated!" 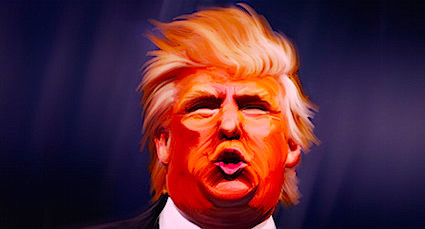 Of course he does. And then it hit me: With his hyperbolic delivery and grandiose proclamations, Trump had tapped deep into a collective archetype that Americans have encountered on television sets and in movie theatres for generations: Victor Fleming's totemic work of cinematic fantasia, The Wizard of Oz.

Fleming's film, of course, starring the late Judy Garland as the Kansas farm girl Dorothy, was a sensation beyond American shores. Winston Churchill noted that brigades from Australia sang music from the film on their march through North Africa during World War II.

But few people realize that the series of children's books by L. Frank Baum, on which the film was based -- most notably The Wonderful Wizard of Oz and some 15 subsequent Oz volumes published during the first two decades of the 20th Century -- is riddled with political references and serves as an allegory for American populism in the 1890s.

The parallels to Trump's campaign are profound.

As first noted by high school teacher Henry M. Littlefield in an article published in the American Quarterly in the Spring of 1964, the Oz series tapped into deep-seated political imagery from the turn of the century. While critics of Littlefield's work have subsequently discounted some of his thesis, Littlefield acknowledged that Baum himself crafted the allegory in "a minor key," though there was little doubt about many of the overt political metaphors in his work.

The Tin Woodman in Baum's novels represented the industrial working class; the Scarecrow represented mid-Western farmers; the Cowardly Lion was none other than the populist presidential candidate William Jennings Bryan, in perpetual pursuit of courage (and the presidency). And Dorothy's silver shoes (they were changed to ruby for the film) represented a return to the silver standard of monetary value advocated by Bryan in 1896 ("free coinage of silver" was his motto); Oz itself -- and the yellow brick road -- reflected the traditional gold standard promoted by the industrial ruling class.

With his racist rants about immigrants (though he built Trump Towers with immigrant labor); his misogynistic attacks on women (his comments about Megyn Kelley's blood representing merely the tip of the iceberg); his vicious lies about Muslim's celebrating the 9/11 attacks (with echoes of Sarah Palin seeing Russia from her backyard); and his vague economic sophistries (from his comments on healthcare to foreign trade, he can't discuss specifics on anything), Trump has become the modern-day version of the Wizard, hiding behind a phalanx of curtains and screens, pulling his levers and twisting his wheels to create a fraudulent illusion of power and influence.

With little direct accountability in the wake of a shamefully fawning press, Trump's political legitimacy is all smoke and mirrors -- the polls, the polls, the polls -- and, most of all like the Wizard's, founded on deception and fueled by fear. He doubled down on his absurdities this weekend, saying that he would not disavow David Duke or the Ku Klux Klan (he said he knew nothing of them, though in 2000 he identified Duke and the KKK by name), and favorably citing Mussolini ("it's a very good quote"). It's a fine line between populism and fascism -- and Trump crosses it further at every turn.

The Munchkins, of course, in the Wizard of Oz film and literature were the "little people," or the American body politic, dominated by the economic and political powers that be. In a recent assessment of Trump's supporters, it's clear that they reflect the feelings of those who have been dispossessed and disempowered. Trump's demagogic campaign promising to "Make America Great Again" is little more than smoke-and-mirrors, akin to giving the Scarecrow a meaningless diploma (perhaps from Trump University) or the lion a medal for courage (from a war that Trump didn't fight).

In Baum's original The Wonderful Wizard of Oz, the realization that the Wizard is a hoax comes as the main characters enter the so-called Throne Room, where Dorothy's dog Toto accidentally uncovers the faux wizard, "a little old man, with a bald head and a wrinkled face." (I wonder what Trump would look like without his weirdly coiffed comb-over and his garish, caked-on makeup).

So, too, has Trump. His appearances before his rabid supporters are staged and controlled. He never allows the American public behind the curtains. His act is all a carefully crafted construction, a fiction, just like the rest of his career in reality television.


Oz himself in the film was the incarnation of the disingenuous Professor Marvel, a traveling fortune-teller and snake-oil salesman -- a character that dominated the American frontier (and American politics) in the late 19th century. It was the era of Barnum and Bailey -- the tail end of Gilded Age, as Mark Twain dubbed it -- full of grandiose duplicities and obscene displays of wealth. Trump would have felt right at home. Today, however, his luster is tarnished and his gild worn thin.

And who is our modern-day Dorothy, out to reveal The Donald for who he really is? Perhaps, at least for the moment, it is Marco Rubio, finally showing some gumption in the campaign. The two have been trading adolescent barbs at each other since their debate tussle in Houston, but on the eve of Super Tuesday, Rubio seems finally to be getting down to the gritty, uttering truths that no one else was once willing to say. 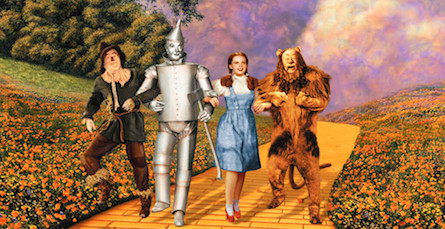 The Tin Woodman, Lion, Scarecrow and Dorothy all embarked on their journey to see the Wizard "because of the wonderful things he does"--the vague notion of magnanimity and omnipotence that defined his aura or, if you will, his brand. Once the Wizard's fraud was revealed, his quartet of pursuers turned angry:

"You Humbug" the Scarecrow charged.

"Oh," exclaimed Dorothy, shocked by the revelation that the Great Oz was a scam artist. "You're a very bad man!"

Award-winning writer and filmmaker Geoffrey Dunn's best-selling The Lies of Sarah Palin: The Untold Story Behind Her Relentless Quest for Power was published by Macmillan/St. Martin's in May of 2011. Portions of this commentary were drawn from that work.