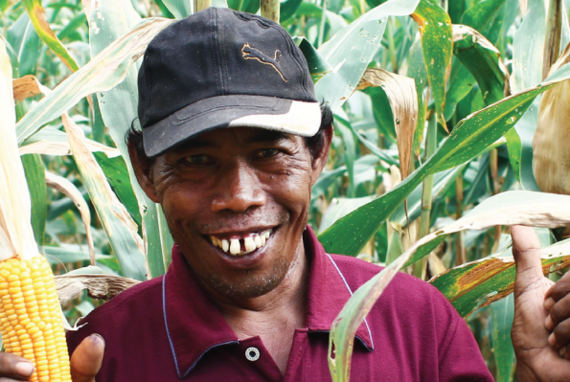 ImpactAlpha.com -- There are 18 million smallholder farmers in Indonesia with monthly incomes of less than 200,000 rupiah, or $58. Vasham, a social enterprise in Jakarta that provide financing, expertise and a guaranteed above-market price for their crops, serves 1,708 of them.

That counts as proof-of-concept that Vasham can both raise farmers' income and turn a profit. Add a dedicated entrepreneur, a "closed loop" business model and a plan for serving 200,000 Indonesia farmers by 2018 and one million by 2023, and PT Vasham Kosa Sejahtera, as it is formally known, was able to attract seed-stage financing, including from the new Unitus Impact Fund, which typically invests between $500,000 and $2 million.

The Vasham investment is the 10th deal for the Unitus Impact Fund, which has just closed the fundraising for its first fund, the $45 million Livelihood Impact Fund. That makes Unitus Impact one of the largest private equity funds focused specifically on improving livelihoods of the global poor and one of the few to target early-stage companies. Unitus Impact is also part of the small but growing venture-capital ecosystems in countries like Vietnam, Philippines and Indonesia.

Beau Seil, Unitus Impact's managing director, said Vasham is a good example of what Unitus is looking for: supply chain improvements that lower costs, raise productivity and quality, and generate premium prices for producers; and distribution improvements that provide high-value, affordables services for low-income workers. Vasham, based in Jakarta, provides fair-market loans so farmers can plant and guarantees offtake at above-market prices.

"We see significant income benefits when farmers are not caught in the company-store cycle," Seil said in an interview. "We think supply chains and distribution chains are broken and that means there are economic inefficiencies keeping people from making more money."

The goal of the fund, part of the Unitus family of entities, is to demonstrate that raising incomes of the poor is an investment thesis that can draw in private investors. As an investment category, "livelihood" is making the jump from development funders (including Mercy Corps, Rockefeller Foundation, International Fund for Agricultural Development) to private equity fund managers. Livelihood Impact Fund, which promises "strong, risk-commensurate financial returns" and "long-term capital appreciation," is one of the first dedicated livelihood funds to attract outside private investors. The fund will measure the improvement in income among beneficiaries and customers of its portfolio companies.

"We made it the focus of Unitus Impact and wanted to build a portfolio of companies focused on livelihoods to show that there are companies, not just one here and there, that are scalable and are strong investment opportunities," Seil said.

The impact fund's focus on southeast Asia, where 70 percent of its investments are targeted, also sets it apart. Sub-Saharan Africa and India have been impact investment hotspots. Large, young populations with high-density and significant poverty create the opportunity for high impact in the Philippines, Vietnam, Indonesia and even Cambodia, Laos and even Myanmar. Aavishkar recently raised an impact fund for southeast Asia, primarily from development donors, and LeapFrog Investments has recently moved into the region to identify later-stage deals.

"We're picking sectors where you have large numbers of people engaged," Seil says. "The margins of this are low, so you're playing a volume game. We ask, 'How do we work with large numbers of farmers or factory workers?' As companies grow that base, they can generate small margins from lots of people, and help them make more money for the work they are doing."

Unitus Labs, the nonprofit hub of the Unitus network, has spun off a number of separate entities since 2000. Unitus Equity Fund is now managed by Elevar Equity. Unitus Capital, an investment bank headquartered in Bangalore, has raised $1.5 billion in debt and equity for social enterprises. The Unitus Seed Fund, which invests in early-stage ventures in India is now part of Capria Impact, which also includes an incubator fund for impact fund managers.

Even before it raised its fund, Unitus Impact completed five deals to prove out its livelihoods investment thesis. The fund's backers include wealthy individuals and family offices (who chose not to be identified) along with the Australian pension fund Christian Super, the eBay Foundation and the Rockefeller Foundation.

Unitus Impact expects to make one or two investments a year in each of its target countries, for a total of 10-12 additional investments. In addition to Vasham and Big Tree, the fund's current portfolio includes:

Vasham was launched in 2013 as a response to food insecurity in Indonesia, which imports billions of dollars of staple foods such as soybean, rice, corn and sugar. So far, Vasham has made loans of 34.7 billion Indonesian rupiah (about $2.7 million). Chief executive Irvan Kolonas believes Vasham can bring about "a revolution, through innovative thinking, to lift the lives of many poor farmers in Indonesia and hopefully in the world."