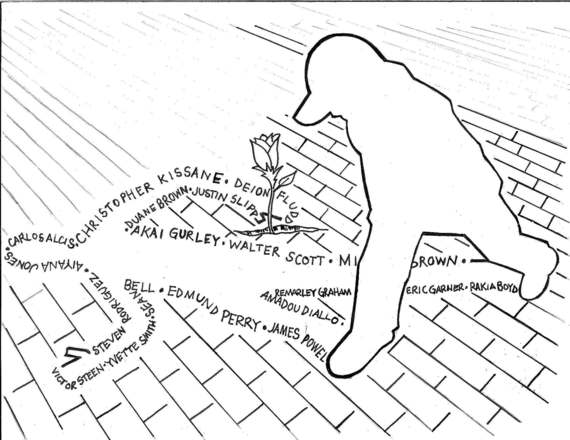 On Saturday, May 16, 2015, NYU Metropolitan Center for Research on Equity and the Transformation of Schools held a conference titled, Race, Rights, and Responsibility: What Educators Can Do to Help Our Students Think Critically about Protest, Law Enforcement, and Civil Liberty.

This conference was not for everyone. And while it was a conference for teachers presented by teachers, it was designed mainly for teachers who care deeply about racial justice and tenets of teaching for change. It was for those teachers struggling to find pragmatic classroom solutions that might interrupt dangerous patterns of policing that brutalize Black and Brown bodies and terrorize communities of color.

As we've come to realize in recent months, police overreach--even to the point of murder--is not an isolated incident. It is not coincidental. It happens daily in settings such as New York and Baltimore, where the students we teach are striving and struggling to make sense of the contradictions of democracy--the gross juxtaposition of ironies: freedom for some tied to the slavery of others, a light of hope set against the darkness of despair, a national dream that rests firmly upon a social nightmare. The questions are intrepid but real. Yet real solutions and spaces to engage in important thinking to overcome structural injustices in society are diffuse and lacking.

At one level we are witnessing what Cornell West calls "a democratic awakening," the unique union of rights groups with poor and vulnerable people who are asking the right kinds of questions and demanding immediate answers. Still at another level, too many of us are still fast asleep, entranced (and sometimes deeply hypnotized) by the symbolism of the post-racial mythologies that typify the Age of Obama. It is my sincere belief that teachers will lead the democratic awakening because we can arouse to action the youthful but energetic masses lulled to complacency by the seductive and sedating rhetorics of post-racialism.

While it celebrates its first Black president, our nation also continues its disregard for Black lives and Black life. The massive use of state power to incarcerate hundreds of thousands of Black and Brown bodies; the de facto legalization of murder against the Children of the Rainbow; chronic and mass un(der)employment; devastated, wasted, and occupied communities; heightened state surveillance; and the like are but a few of the looming examples of our current state of inequities. For Black lives to matter, for Black life to endure, these inequities must be dismantled. To dismantle them, we need a revolution as active and as committed as the systems that sustain human suffering and psychologies that maintain a deeply entrench yet murderous racial caste.

In this time of political slumber, we can't afford to sleep. Indeed certain things in our world endure. Every 28 hours, a bird flies free of a lonely nest. A day, depending on the season, gets longer or shorter. Every 28 hours a mother kindles a novel wish for her vibrant, young child. Every 28 hours, a fresh day is beginning for some, but not for all. Every 28 hours, there is a new Freddie Gray . . .

The use of deadly force has become so standard in the U.S. that every 28 hours an unarmed Black person is shot by a police officer or vigilante acting as a proxy for the State. So I list the names, understanding that this list could be much longer. But only this ceremony--the painful yet powerful procession of pronunciations--can move us to understand and finally act.

Some say this moment is about Black lives, but mostly it's about Black death--not some medieval plague caused by filth and rats, but a composite of suffering and plight faced by darker-skinned human beings whose true "crime" is being born darker skinned. As a result, we are left to witness the folly of justice made more perverse by a tragic orgy of haunting and desperate scenes--an image we've come to know too well over recent years of Black men and boys dying. Our death is not always literal, but nonetheless it's painful and tragic. Before the physical death there is the fatal violence that hinders our dreams, the brutal slayings of hope and inspiration that too characteristically typify our experiences in school.

For many Black males--myself included--classrooms bury potential, and good-intentioned teachers evict from the pliable imagination of young people a limitless real estate of fluid possibilities. It is in this reality that we define Black males as failing, and we use national statistics to scandalize this myth. We have failed them. To offer hope, human rights workers are now demanding changes in public policy--policing reform, as it were. However, this moment demands something greater than policy resolutions. By changing laws, we would find ourselves lucky to somehow change people's behaviors. We need heart and mind solutions; we need to change how people think and feel. For that we turn to education. We turn to educators.

Teachers are human rights workers, and our classrooms are progressive vineyards thirsty for liberation's laborers. Classrooms are never neutral sites. They are contested spaces, where the imbrications of competing interests wrestle daily for ethical real estate. Just as they can harm, classrooms can heal. In this light, classrooms matter. Healing and humanizing classrooms matter most. They have the power to move our assumptions away from the stale and negative deficit assumptions that strip away Black humanity and toward those complex narratives of people that build humanity and nurture sensitivities toward that humanity in ways that abolish pre-existing internal and external contracts of bigotry and violence. In such spaces, teaching takes on a new meaning. Here, teaching means teaching the mind as well as the heart. It means teaching for justice, which is always and only about teaching (to) love.

On May 16, 2015, close to 500 educators assembled as Justice's (or, better put, Love's) soldiers. This assembly of transformative intellectuals, activists, thought-leaders, human-rights workers, and passionate individuals came committed to addressing key issues at the heart of race, education, and policing. The conference was empowering, as it encouraged our assembly to teach our truth with more certainty and candor, a grander conviction and clarity, with greater credibility and courage.

About 500 hundred educators throughout New York City have gone back to their classrooms to teach change. One of those teachers emailed me today, saying: "I did a Black Lives Matter lesson with my students. They get it now." In the end, isn't that what it's really about: Getting it! In a world were so many people continue to not get it, we would be remiss to ignore the power of classrooms and teachers to change the world.

David E. Kirkland is an associate professor of English and urban education at New York University. He is also the incoming Executive Director of NYU Metropolitan Center for Research on Equity and the Transformation of Schools. Dr. Kirkland can be reached by email at: davidekirkland@gmail.com.