Last spring, a congressional staffer introduced me to a new expression. She said, "Our job is to make business succeed."

She was gently explaining how I had missed the point. Her job was to make business succeed. I was worried about workers. Her priorities and mine did not match up.

I assume she meant large businesses, with very large PACs, who have more influence with congressional committees than I do.

Shortly afterward, US Commerce Secretary Gary Locke said it more artfully in a radio interview, "Our job is to make businesses succeed... so they can create good new jobs."

To be clear, I am a capitalist, and I want business to succeed -- for one reason and one reason only. I expect any success to be shared between workers, communities and investors. Since the mid-70's and the fall of communism, free-market advocates have told us that the best public policy is to get out of the way and let markets solve all our problems. The invisible hand will deliver bounty to workers, as Secretary Locke implicitly promised.

An alternative view is that we can't see the hand invisible hand because it is not there.

The two parts of Secretary Locke's promise are not equivalent. The first part is certain; We will make business succeed. The second part -- where workers prosper -- is a leap of faith.

Last month, Paul Krugman expressed shock when the new chairman of the House Committee on Financial Services said, "in Washington, the view is that the banks are to be regulated, and my view is that Washington and the regulators are there to serve the banks."

In South Carolina, the governor appointed a union-busting attorney to run the state's labor agency. The governor said, "She knows what it takes to take it on and she understands it's going to be a partnership level that we cannot lose. We're going to fight the unions and I needed a partner to help me do it."

I was raised to expect policies that raise our standard of living. In South Carolina, evidently, you can get elected to high office, putting business interests above workers and communities. South Carolina's competitive advantage will be low wages, and the governor will keep wages in her home state as low as she can. 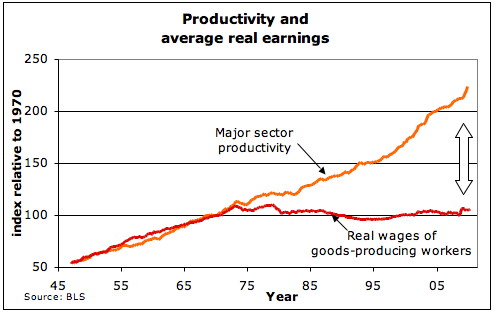 Since the mid 70's, policy-makers have done their best to make business succeed. Productivity has doubled while wages, adjusted for inflation, stagnated for over 30 years. Wages could be more than double what they are now, based on productivity gains since 1970.

The last 3 decades have been very good for the top 1% of the population. Their share of the country's taxable income has reached its highest level since the income tax was introduced in 1913.

Our free trade policy is a clear failure, running up 6 trillion dollars in trade deficits and de-industrializing our economy. Well, more precisely, free trade is a failure for communities and workers. It's been terrific for investors and executives of multinational companies.

The Great Recession is a fascinating study object. The financial industry wrecked a perfectly good country at unimaginable cost. Rather than face market discipline, banks and investors demanded a public bailout. For everyone else, austerity policies now compound the loss of millions of jobs, plus millions of home foreclosures, plus lasting career damage for most workers in the real economy.

In November, Bill Moyers talked about this. I almost drove my car off the road, listening to him on the radio. He summarized Robert Hodge's historical analysis of the "Gilded Age" and public policy about 100 years ago.

"Great wealth was to be gained through monopoly, through using the State for private ends; it was axiomatic therefore that businessmen should run the government and run it for personal profit."

In this new "winner-take-all politics," large businesses are organized very effectively while institutions of civil society are weakening. By sweeping away the counter-balancing role of civil society, business and investor interests have a clear path to greater wealth.

At the national level, lobbyists for large companies number in the thousands; corporate campaign contributions set the cost of running for office at heroic levels; and career paths cross back and forth between government and business, making the difference hard to detect.

For the last few decades, the role of civil society has dimmed proportionately. Unions are in eclipse. Environmentalists are forced to defend their principles with a business case, as if the earth were a market commodity. Social safety nets are dismantled, and families pick up more risk and cost. Science and scientists are brushed aside as politically inconvenient. Universities are chronically under-funded. We give teachers fewer resources and then blame them for our failure to compete globally.

The President is forced at regular intervals to renew his vows to be more friendly to banks and investors. Pundits ridicule the concept of social justice, as if market solutions can be just and fair, as well as powerful and efficient.

For generations, Americans took pride in our strong middle class. The middle class was our political, social, moral, and economic counter-balance to corporate power. That balance has given way to "the new normal" which is some goofy hypnotic code for giving up on opportunities for our children and accepting diminished futures.

We need to restore the role of civil society and middle class institutions as counter-balances to investor and business interests.

Which social institutions and organizations are aligned with the public interest? Environmental groups, human rights, and faith-based organizations come to mind. Clyde Prestowitz was principal trade negotiator for Asia in the Reagan administration. He says (p. 275) that unions are at the top of his list. I would add Main Street businesses, which need prosperous customers more than they need low wages. Warren Buffet, George Soros, and other wealthy citizens openly advocate for stronger democratic policies.

To get into balance, we need to restore the social contract -- the deal that public resources are rightly used to promote business, and in exchange, businesses recognize a duty to shared prosperity.

We can take a lesson from two recent large-scale grassroots mobilizations. The 2008 Obama campaign inspired millions of voters at the precinct level. Two years later, the Tea Party mobilized millions of voters around mistrust in our public policies. Voters are anxious about our decline into a shabbier "Lesser America."

Political interests must be re-aligned and brought back into balance, reversing the concentration of power at the top of our society. Government has a legitimate role to play in making social investments, creating opportunity and fairness, and building a stronger future.

And of course, we would make business succeed.