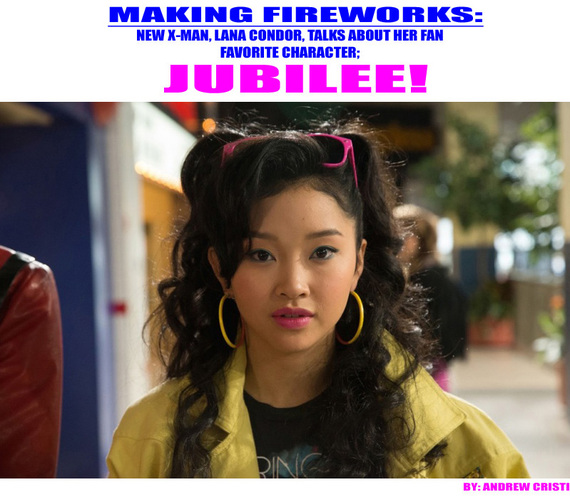 After two decades of live action X-Men on the big screen, from the major box office smashes, to origin stories and spin-offs, to TV movies and television series', fans have been teased time and time again with the prospect of seeing X-Men fan favorite Jubilee on screen. Beloved for so many reasons, Jubilee has always held a strong place in fans hearts. Maybe it's the nostalgia factor as her fashion quintessentially represents what fans loved about their childhood. Maybe it's how her character helped give a spotlight to Asian-American's- something that isn't done often enough in mainstream media. Maybe it's just because she's cool. Whatever it is, when it was announced that actress Lana Condor would be playing Jubilee in X-Men: Apocalypse, and the character would finally be getting her just do, fans rejoiced.
Of course, this wasn't the first time we got a taste of Jubilee. The very first time the X-Men were adapted was for a failed potential pilot in 1996 called Generation X, of which Jubilee was supposed to be the star. Of course, this was not the Jubilee we all knew and loved. Played by Heather McComb, the character was completely white-washed and the character resembled very little of her comic book self. For several movies after that, the idea of the character was teased and tweaked and fans continued to want more. Finally, a retro commercial for X-Men: Apocalypse was released for "Xavier's School For Gifted Youngsters" and fans finally got the Jubilee they were long waiting for. It took them twenty years- but they finally cast the perfect girl!
Now that X-Men: Apocalypse has finally been released, one of the major cries heard round the world by loyal fans is that they want more of the spunky teenage mutant firecracker! Message boards are on fire with requests pleading to see more Jubilee, similar to that of fan-favorite Quicksilver from X-Men: Days Of Future Past- whose role was enhanced this time thanks to the outcry of fans. Here, actress Lana Condor sits down and talks about what it's like to play such a beloved role, the diversity the X-Men franchise offers, what's next for her, and more!

Jubilee is so loved by fans and everyone is so excited to see more of her. How was it taking on a role that you knew was such a fan favorite?
"It's an awesome opportunity. The fans make it that much better because there has been so much support from them. I know Jubilee means a lot to them- and she means a lot to me too, and I couldn't be happier that fans would want to see more of her! I hope the studio will hear that!"

True fans know that Jubilee is actually one of the most powerful of all the X-Men- so much so that Emma Frost has called her one of the most powerful mutants she has ever encountered. Talk about Jubilee's powers a bit and how they will be featured in the franchise.
"As everyone knows, her powers in the comics are fireworks, but in the film they are going to be more like fire electricity- hopefully we get to see more of that. I think I heard Bryan [Singer] say it will be in the DVD...but the idea is that she can manipulate fire explosions in her hand."

X-Men: Days Of Future Past had a special edition that is also known as "The Rogue Cut." Will we be seeing a "Jubilee Cut" when the film is released?
"I don't know if it will be a full on JUBILEE CUT- Rogue had her own side plot that was cut, and I think with Jubilee it will be some cut scenes. These scenes were cut for continuity or pacing purposes. I'm sure they will add these scenes back into the film, but I don't think it will get its own re-titled cut (Condor giggles in the sweetest, most humble way)"

Unlike most superheroes, X-Men often wear regular clothes as their costumes. Jubilee's appearance means so much to fans because her fashion really reminds them of their childhoods. Fans were really happy with this incarnation. How much dedication went into that this time around?
"I think it's awesome that they made her costume pretty authentic to the cartoon. Of course, in the comics she has her classic yellow jacket that everyone knows her by- and when I first went into wardrobe fittings, I remember keeping an eye out for yellow jackets...and I was getting nervous because they didn't have any. I felt a really strong devotion to the fans and that they wouldn't know who she was, or that they would be upset or angered! So, I remember that I texted Bryan [Singer] and he texted the costume designer saying 'If Jubilee doesn't have a yellow jacket, it will be blasphemy!' So, it's a funny story how that all came to life."

You have mentioned that this movie and the X-Men franchise is different than other superhero movies because it dares to focus on youth. It tackles stories that everyone can relate to- stories of alienation and coming of age. What do you think about that?
"It really focused on the younger mutants and them learning about themselves and learning of their powers. As a teenager, you're still trying to figure out who you are and what you believe in- add an extra component of having a superpower and not really fully understanding how to use it is a really stressful time. And the younger generation brings an extra energy that's really refreshing. It's a good coming of age story- kids who feel left out or like they don't belong will learn something about acceptance- and that's great."

X-Men, in general, is a series that offers far more diversity than most superhero franchises. The cast and characters range from all different types of people from different walks of life and different races and cultures, and even gives women more of a centralized, prominent role. For a series about mutants, it seems for more human. How do you feel about that?
"X-Men always strives to be diverse because when you take away all the CGI, and special effects and bad ass-ness, there's an underlying heart of X-Men- of people who haven't had the easiest time fitting into society. It's really cool that the X-Men franchise can take someone who feels different and put them in a team, and show them that they can be a part of something, and they don't have to feel like outsiders. And the cast reflects that- it is so diverse, and it's great to be a part of something that is trying to make change- especially right now when you see things like #Oscarssowhite and race being such a hot-button topic in the industry, X-Men really tries to make a difference. I'm so happy to be a part of that and if I can to even make a tiny dent."

Again, Condor remains supremely humble in the most beautiful way possible as she doesn't quite realize how much of a dent she is making for Asian's in media. I inform her;

Time Magazine recently released an article on how Asian's are usually excluded from diversity and deserve more visibility in the media. Another reason Jubilee is so looked up to is because she really gave a face for Asian characters in the media- which had been so horribly underrepresented or misrepresented in the past. How does it feel to be able to be the face of such an inspiring character for so many, and to help add to that visibility?
"Asians are underrepresented in the media, and what makes Jubilee so wonderful is that although Jubilee is Asian- she's not a stereotype! She's just a normal girl. She's not the valedictorian, or a mathlete- not that Jubilee isn't smart, she is. And not that those roles are bad, they're great also. But it's just great to see that an Asian can be their own character and not play into a stereotype. It's a dream to play, because I do get offered a lot of stereotypical roles and this is a girl who sends fireworks out of her hands- she's cool. I think Hollywood is getting better. Star Wars just sold more tickets than ever with John Boyega- a black male- as their lead, which shows tons of progress. But there's still more to do."

Talk about Lana- what drew you into acting, and what roles do you typically look for?
"I was doing the theater program in my high school and I just sort of tried the film and television industry and I just got lucky that I looked the part and was in the right place at the right time! As for the roles I go out for- I really don't limit myself. Like I said, I don't allow myself to be held back by stereotype casting, so I will let them submit me to so many diverse roles, regardless of what it says on the casting sheet."

You have another huge movie coming up- Mark Wahlberg's, Patriot's Day, about the Boston Marathon bombing. What can you tell us about this?
"I can't say much...but the movie shows the chaos of the bombing and finding these two brothers, but it also features multiple sub-plots of personal stories of others surrounding the events and how these people were effected even if they weren't at the race. Communities all around Boston were deeply affected- that panic spread much further than just the finish line. I think the movie will also try and raise morale on how quickly the country came together at that time to find these brothers. Peter Berg is the director and he's handling it beautifully because he knows a lot of people do not want to relive the PTSD of that time, and he knows what he is doing. I'm really excited to be a part of it."

Superhero franchises have taken off in such a way that spin-off's are spawning in every direction. Jubilee is a part of so many side-stories and sub-teams in the X-Men. If they were to retry something like Generation X in an Agent's of Shield/Jessica Jones type fashion and perhaps give Jubilee her own series, would you be into it?
(Condor takes a very long pause before gushing with such excitement that it could melt your heart)
"Are you kidding? If they offered me my own series as Jubilee? that would be so sick! I would pay the studio for that!"

Don't worry, Lana... so would fans. After twenty years, the studio finally found the perfect Jubilee- and fans want more!
For now, you can still catch her in X-Men: Apocalypse on the big screens. Fans, keep begging for more Jubilee! If X-Men has proven anything, it's proven time and time again, it will always makes the fans happy.