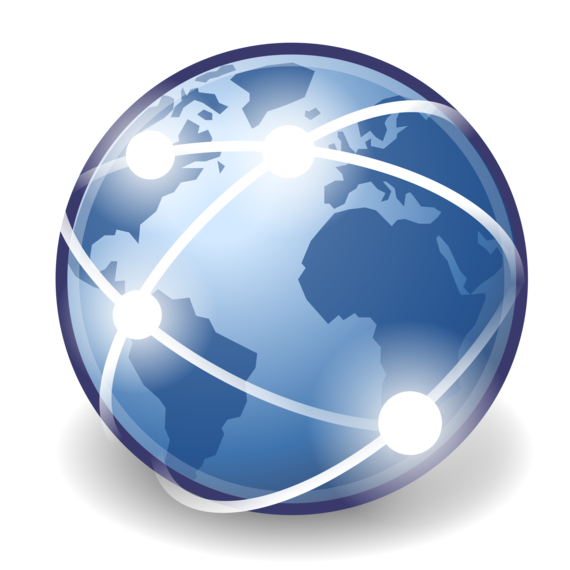 Last year, 67 percent of Americans had broadband access at home, which was actually three percent lower than it was in 2013, according to Pew Research Center. That's still a lot of people, but it also shows that nearly a third of Americans lack basic home Internet service.

Some of that is due to affordability -- an issue that both the government and some Internet service providers are starting to address with low-cost home broadband plans for low-income families and individuals. One reason that home broadband adoption has peaked is due to the growth in smartphones, but even that is related to income disparities.

Pew found that 13 percent of Americans are "smartphone-only," and "the most significant changes in these adoption patterns are taking place among African Americans, those with relatively low household incomes and those living in rural areas." For many low-income people, smartphones are seen as a necessarily lifeline while home broadband may be something they can live without.

Pew also found that smartphone-only users more frequently have to cancel or suspend service due to financial constraints. 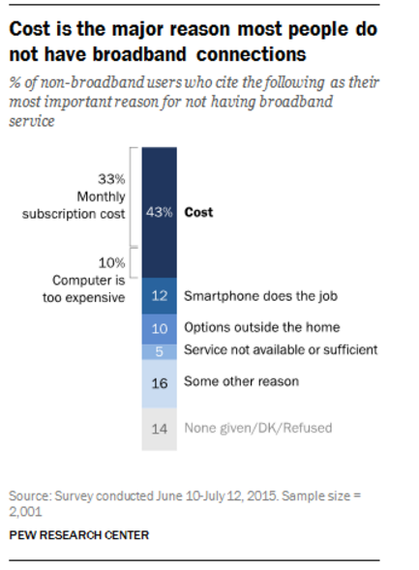 While smartphones are great for checking email, watching short videos or scanning headlines, they have their limitations, often including data caps that can significantly restrict how much you can do in a given month.

People at all income levels are increasingly using the Internet to find and apply for jobs, and while smartphones are pretty handy when looking for work, they can present challenges. Pew found that 47 percent of smartphone job seekers have had problems accessing job-related content because it wasn't displaying properly on their phone, with an equal number saying they had problems reading the text in a job posting because it was not designed for a mobile device.

And even though some people are adept at typing on smartphones, it's definitely easier to fill out a job application or type a cover letter or resume on a computer. And that's especially true if you want to make a good impression by submitting an application and resume free of mistakes that are all too common when typing on a phone.

Having access to a home computer and a home broadband connection is especially important for families with school-age children. I'm always amazed when I hear about kids who type term papers on their phones.

Fortunately, there is a way for some low-income families and individuals to get low-cost Internet and even a low-cost computer.

Five years ago Comcast launched its Internet Essentials program, initially for families with a child in a school lunch program, in all Comcast markets. Recently the program has been expanded to low-income seniors in San Francisco and a few other cities.

The service, which now serves about 500,000 households, costs $9.95 a month and has no installation fee or credit check and includes all equipment, including in-home Wi-Fi. The program also addresses the issue of device affordability by allowing eligible subscribers to purchase a low-cost desktop or laptop computer that comes with Microsoft Office and Norton Internet Security, for $149.99. You can apply online at InternetEssentials.com. The program provides 10 megabits per second (Mbps) downstream service, which is adequate for streaming video.

More recently, AT&T launched its Access service, which is available to people on the Supplemental Nutrition Assistance Program (SNAP). Its speed and price depend on what is available in your area but costs either $5 a month for 3 Mbps or $10 for up to 10 Mbps. As with Comcast's service, there is no installation fee, no commitment and no deposit.

Those living outside Comcast or AT&T service areas should check with their local providers because an increasing number are voluntarily offering low-cost services for low-income customers.

In March, the Federal Communications Commission voted to extend the Lifeline program, which has long provided phone subsidies for low-income Americans, to now include broadband Internet and mobile. The program offers a $9.25 a month subsidy toward any combination of broadband, landline and mobile.

Even if you don't qualify for any special low-cost programs, there are ways to save on broadband.

Almost all Internet service providers offer a variety of plans whose prices vary, depending on speeds and bundled services. In most cases, the least expensive option should be sufficient, even for streaming video. Netflix, for example, has a minimum speed of 0.5 Mbps but recommends 3 Mbps for standard quality and 5 Mbps for HD, which is within the minimum service levels for many providers. Some home broadband services will charge more for higher data caps, but, unlike mobile plans, you're unlikely to bump up against their limit.

If you're now paying for cable or satellite TV or phone service, ask about bundles that might save you money. Call your provider to see if they can lower your rate (especially if you're past that first-year teaser rate) either by matching competitive offers or by adjusting your services such as eliminating TV channels you never watch or reducing your Internet speed if you're paying for more than you need.

Another way to save money on Internet is by buying instead of renting your modem or adapter. Comcast, for example, charges $10 a month to rent a cable modem, but you can purchase one on Amazon for under $5 for a substantial long-term savings. You can go online to find a list of approved devices by searching for the name of your provider followed by "approved modems."

There are other reasons for the "digital divide," including gaps in digital literacy and Internet-related fears, but cost continues to be a deterrent for some people, so it's nice that there are options for those who are holding back because they think they can't afford broadband.

Disclosure: Larry Magid is CEO of ConnectSafely.org, a nonprofit Internet safety organization, that receives support from Comcast and other technology companies.

This post first appeared in the San Jose Mercury News