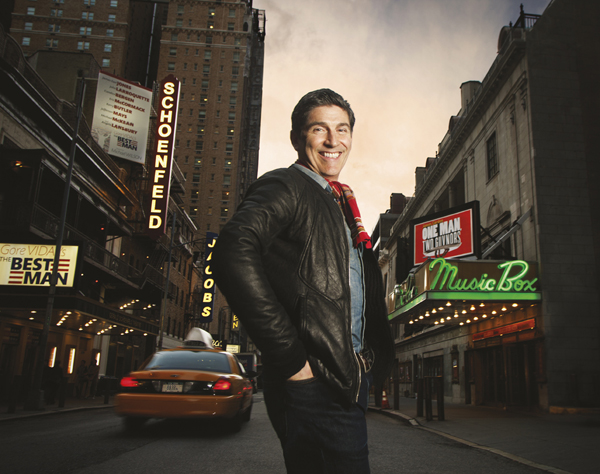 James Lecesne created the character of Trevor -- a gay 13-year-old boy who attempts to take his life after being rejected by friends because of his sexuality -- for his one-man show Word of Mouth in 1993. He had no idea it would spark a national movement. Co-founded by Lecesne in 1998 after the story of Trevor was adapted as a short film, The Trevor Project offered the first 24-hour suicide-prevention hotline for lesbian, gay, bisexual, transgender and questioning (LGBTQ) teens in America. In the decade and a half since then, the organizations has grown to include an active online community and offers lifesaving guidance and resources for educators, parents and young people. (Photo © Paul Mobley for Everyday Heroes: 50 Americans Changing the World One Nonprofit at a Time)

With all the discussion lately about bullying and the frequency of reports about LGBTQ suicide, we can sometimes lose sight of the changes that have happened over the past 15 years, and we can forget the ways in which the LGBTQ community is making it better for young people.

I was thinking about this a couple of weeks ago when I visited an LGBTQ youth center in Little Rock, Ark. I had been invited to speak, and as always, I was curious to learn firsthand how young people are faring in places outside New York and Los Angeles where there isn't much community support. But nothing prepared me for what I found when I arrived.

The center was teeming with life. About 40 young "queerblings" (as they called themselves) had shown up for the event, and every one of them seemed totally unique and genuinely happy. There was plenty of rainbow hair, pierced noses, tattooed arms and gender-neutral names, but these were only the outer expressions of something deeper in themselves that they were tagging. All of them were lit up with possibility, deeply interested in one another and in the possibility of making a better future for themselves and for one another. As I talked with them, I discovered that no matter what harsh thing had been said to them in the hallways of their schools or what trouble they were negotiating at home, these young people had found a place to go at the end of the week, a place where they could listen to one another, unload the insults, offer support, be themselves and, most importantly, express their love of life -- just the way they are. This was a new world I had stepped into; it was the future I had always dreamed might happen one day. And it had come about simply because they had the kind of support and guidance that all young people deserve and so few LGBTQ teens find, especially in the South and the Midwest.

Community activist Randi Romo and her granddaughter, Devon Beardon, a former member of the Trevor Project Youth Advisory Council and a winner of the Colin Higgins Youth Courage Award, began DYSC (Diverse Youth for Social Change) in Little Rock six years ago. Since then, many people in the community have worked to support the center and the 300-plus members on their roster. They've opened a DYSC chapter in nearby Conway and have plans to open two more in the state in 2013. They've even introduced Rainbow Camp, where local LGBTQ kids can go on a wilderness camping trip. The center remains the only one of its kind in the state of Arkansas, and the programs offered are unique in that they go way beyond being just a weekly support group for LGBTQ youth. They also utilize a dynamic social justice and life skills curriculum that they've developed; they've introduced youth to critical thinking and leadership skills, and they've connected youth to issues of oppression beyond LGBTQ concerns. Every curriculum unit has one or more of the DYSC foundation principles: education, organizing, advocacy and cultural work. By the time I left Little Rock, I had enough evidence to convince me that the antidote to bullying is creating stronger communities for our LGBTQ youth, not only in schools but in towns and cities all across America.

All young people, regardless of their sexual orientation or gender identity, need someone who's got their back. It doesn't matter whether the violence that they confront is verbal, physical or cyber-related; the effects are the always same: they are reminded that they don't belong, that they are not wanted and, worst of all, that they are alone.

There are a few other notable centers like DYSC springing up across the country and offering on-the-ground support for LGBTQ youth, and not just in the major metropolitan areas. Places like the Openarms Youth Project in Tulsa, Okla., and the youth-led Queer Youth Space in Seattle, Wash., are unique in their ability to respond to the needs of local LGBTQ youth and offer resources and support. They are proof that people everywhere are beginning to see the value of a future where everyone has an equal opportunity to love, and they are busy creating alternative spaces that are not only safe but liberating.

For those who don't have access to such local support, don't know about it or are afraid to go, The Trevor Project continues to be the go-to organization for youth who are questioning or struggling with issues surrounding their sexuality and gender identity. Keeping everything completely anonymous, The Trevor Project continues to operate the only nationwide, 24/7 hotline for LGBTQ youth, the Trevor Lifeline. In the past couple of years, the call volume has increased, and the demand for services has grown exponentially. In addition to the Lifeline, TrevorChat was developed so that young people can chat with trained counselors and get the support they need; it's available three days a week for now, but it will operate seven days a week by next summer. The Trevor Project also launched TrevorSpace, a secure online community where over 44,000 youth from 138 countries connect with one another, offer peer-to-peer support and share information. Ask Trevor is a service that provides young people an opportunity to write in and ask questions that are not time-sensitive. The Trevor Project is also working with state and federal agencies and other nonprofit partners to introduce anti-bullying legislation, and they have stepped up in-school outreach and educational programs in many places around the country. The Trevor Project is committed to providing all young people, regardless of sexual identity, the opportunity to be heard and the encouragement to be themselves.

When The Trevor Project was founded 14 years ago, the world was a very different place, not only for LGBTQ youth but for everyone. Congress had just enacted the Defense of Marriage Act (DOMA), "don't ask, don't tell" (DADT) had been in effect for five years, AIDS was an epidemic, Will & Grace had not yet begun to air and Matthew Shepard was a first-year political science major at the University of Wyoming. According to statistics then available, LGBTQ people between the ages of 13 and 25 were four times more likely to attempt suicide than their heterosexual peers, and suicide was the second leading cause of death on college campuses. Countless young lives were quietly ending all across the country, and there was nothing in place to support them in making a better choice. Things have indeed gotten better for LGBTQ youth, but the statistics remain the same. There is still so much work to be done. All of us who are now fully living our lives as a lesbian, gay, bisexual or transgender people have the means to reach back and offer support to LGBTQ youth so that they don't have to struggle as we once did. Young people need to know that we have their backs, that we will be here for them and that we won't give up until it gets better. As Harvey Milk once reminded us, we have to give them hope. All young people need to believe in a better future for themselves, and we need to believe in them because they are our future, right now, just the way they are.

For its contributions to the LGBTQ community, The Trevor Project is featured in Everyday Heroes: 50 Americans Changing the World One Nonprofit at a Time, released Oct. 23 by Welcome Books. The book details the organization's history, along with the stories behind dozens of other inspiring nonprofits.

Co Founder of The Trevor Project