After construction workers sexually harassed women passersby at a 22-acre site in Prospect Heights, New York, the four companies employing them have taken an unusual step. The employees will each wear a different colored hard hat to coincide with their company and they have new badges and hard-hat stickers to make it easier for harassed persons to identify and report their perpetrator.

It is encouraging to see a company take street harassment seriously. But one of the downsides to this plan is that it places the onus on the harassed person alone; they have to take time and use emotional energy to pay attention to what was said or done and by whom and file a report and deal with whatever happens once a report is made.

Making it easier for a harassed person to report is very important, but in general, companies need to do more, especially if they know that some of their employees are harassers.

It's been 25 years since professor Anita Hill's testimony during the confirmation hearings of Supreme Court Justice Clarence Thomas made workplace sexual harassment more visible, but sexual harassment is still widespread, including in astronomy, the National Park Service and Hollywood.

There is no single solution for making trainings more effective. But for one idea, instead of using the typical cheesy and perhaps harmful sexual harassment video and training, companies could use a film or documentary in which sexually harassed persons talk about their experiences and why it's upsetting (there are many online). This way, employees can hear from real affected people and hopefully better understand the issue and why it matters.

Companies can even make their own film. In Washington, DC, when the Washington Metropolitan Area Transportation Authority began crafting a training for their employees about sexual harassment on the transit system in 2012, they came to a public forum where people shared their stories. After the forum, they invited interested people to be filmed sharing those stories, which were then integrated into the training materials. Hearing from real riders who had faced harassment on the system was effective. 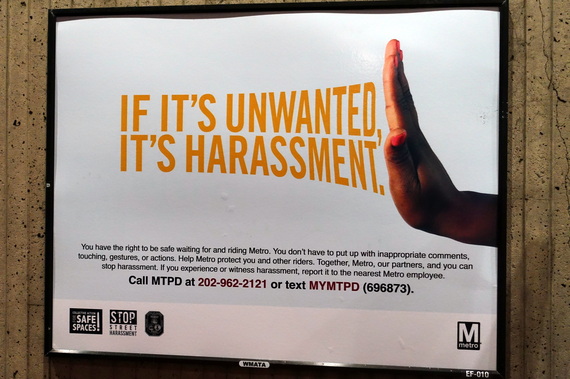 Asking employees to talk to their family members and friends and report back on what they learn could be another tactic. For men in particular, it can be very eye-opening to hear the stories of their female loved ones which they may never have heard or observed before. My dad and my male partner both had no idea that I was regularly facing sexual harassment in public spaces, for example, until I began telling them my stories. Just last month at an anti-street harassment rally in NYC, my dad spoke about how until he heard the stories of his wife, mother, sister, and daughters, he didn't understand this issue, and in fact, he said he thought some women enjoyed the sexual comments and whistles on the streets.

This is not atypical among men. I've given around 150 talks about sexual harassment in public spaces, schools and workplaces across the last six years and over and over male attendees inevitably express surprise that this happens and how much women dislike it and outrage over its frequency and severity. These reactions are also often visible when a video or hashtag about sexual harassment goes viral. Last month, for example, Everyday Sexism asked women to share stories about the first time they encountered sexism, including sexual harassment, using the hashtag #WhenIwas. There were more than 50,000 tweets and many men noted how eye-opening reading through the tweets was for them.

Creating space for small group dialogue sessions moderated by a trained professional, where employees can discuss real examples in their field, talk about what is and isn't okay, and ask questions could also be an important element (if done well).

And while yes, holding and facilitating discussions and dialogues is not easy and will take time and money for the lost productivity of workers during that time, it is important. And it could be good for the company and save money by avoiding lawsuits or reducing low productivity due to distress over sexual harassment.

Of course, having clear policies - with examples - and reporting processes that do not penalize the harassed person is crucial. Especially as persons who use sexual harassment as a bullying tactic or power play may not be dissuaded by hearing others' stories or dialogues but may be dissuaded by punishment.

So while making it easier to report sexual harassment is important, companies cannot leave the onus on harassed persons alone to change the culture; they also need to put the time and resources behind really addressing these issues in more impactful, thoughtful ways.