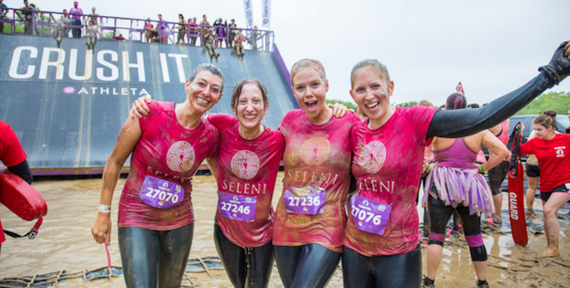 At the Seleni Insitute, our main mission is to destigmatize mental health issues. Because when people suffer from them, the cost can be counted in lives. In my own family, we've lost people to mental illness, and the reverberations can still be felt three generations later.

In the United States, we have seen a 20 percent rise in suicide between 1999 and 2013. A shocking statistic. And the group with the greatest increase? Women. Forty-five percent more women and girls took their lives in 2013 compared with 1999.

Tragically, time after time, the stigma and fear of a mental health diagnosis prevents people from even asking for help. And yet family members don't suffer in isolation; one person's distress often extends to entire generations. Although this cycle can improve, too often mental health is seen as something ugly or messy. So it's no surprise that our first impulse is to keep it in the dark.

At Seleni, we're bringing that conversation into the light, which is why we run Mudderella. As our team takes to the muddy course this year, our goal is to give the need for mental health care and funding the same importance as so many other medical conditions that are supported by people who take on physical competition and challenges, such as triathlons, marathons, and 5k walks.

When people sign up to walk, run, bike, and get dirty, they are doing three things: improving their own health, raising desperately needed funds for research and care, AND (perhaps most importantly) making a health condition an acceptable topic for dinner table conversation. Wouldn't it be wonderful if mental illness were as accepted a topic as physical illness? Then we could talk about the family members we are running for and share our struggles without fear of judgment or worse.

In response to those shocking suicide statistics, Dr. Christine Moutier, chief medical officer of the American Foundation for Suicide Prevention, told CNN: "Our nation has not made the level of investment on a federal level that can have the positive effect on suicide that has happened for the other leading causes of death." Those include heart disease and cancer, topics no one likes to talk about, but which most of us are comfortable discussing.

We deserve a world where women and their families don't have to suffer in silence, and we can get there by doing for mental health what the pink ribbon campaign did for breast cancer - making it acceptable, even admirable, to talk about and work toward better mental health care.

This is why we run.

This article originally ran on the Seleni Institute website and is reprinted here with permission. Seleni is a nonprofit organization providing clinical care, research funding, and information to transform mental health care and wellness for women.