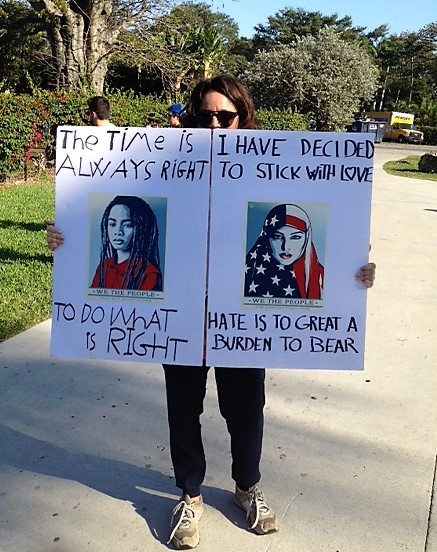 Yesterday I participated with two friends in the Women's Rally in Miami . I have to confess that I was not sure what I had signed up for, and certainly didn't expect nor imagine what I was about to experience. What was called a rally became more like a march, which started at the train station, where the train was delayed for mechanical reasons for over one hour. We wanted to join the West Palm Beach rally, but lacking transportation, decided to go South instead, and join the Miami rally, about 24 miles away. At the platform we began to notice other people, men, women and children, who seemed to go to the same event. We shyly began to nod and smile at each other.

Once on the train, a big strong man in his 60s sat next to us. After a few minutes a conversation started, and we learned that he too was joining the rally. He was a white man that grew up in NJ, and we were one Lebanese-American, one black Jamaican and me, from Argentina. In a very easy way we entered into dialogue about race in America, what it meant to be black, be white, and our diverse experiences. I mentally stepped out of the conversation for a moment, to notice and fully realize what was happening: a sample of Americans were listening to each other, sharing stories and experiences, in an appreciative, curious and respectful way.

The train arrived at the transfer station, and over a hundred of us walked down the hall, discovering soon that we had to get a new ticket. It was clear that South Florida's public transportation is not very user friendly, nor frequented by the numbers who were using it today. The multitude lined up in front of four automated machines, and the lines didn't move very fast. However no one was impatient or complaining. Some people were spontaneously stepping to the front to help the puzzled users who were trying to figure out the system. At that point I started to observe that we had become a 'we'.

On the next train platform, we found out that our train was over half an hour away. I looked at my watch: it had been over 3 hours that I had left home, and I hadn't yet reached the event. Or had I? While standing and waiting, it became clear that we all were there for the same goal. Women of all ages, children and some men, dressed with intentionality: pink, strong colors, hats, wigs, T shirts with messages, bodies that became the message and the messenger at the same time. Homemade colorful and creative signs. My friend decided to call people together to take a picture. This initiative reinforced the reality: we were in this together. Her initiative launched the momentum and many began to take pictures of each other on their phones, grouping, smiling, laughing, and starting conversations. We definitely were no longer a group of strangers. 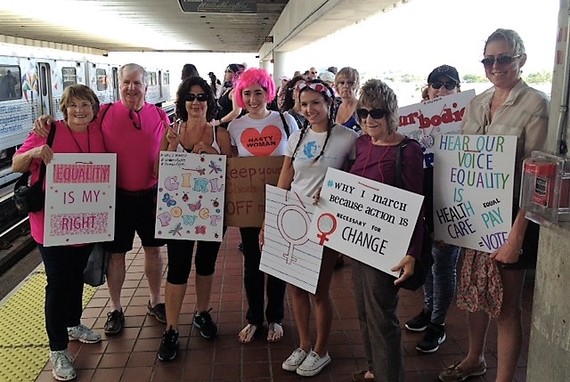 We had to get off the train once again, to connect with the Miami Metromover. The hundred plus of us walked, like exploring tourists, and found our way into the final stretch. Alas, the automated driverless Mover did not move. It stood still for some time, until a voice came through the speakers indicating it would not leave the station and we all had to get off. Puzzled, we looked at each other, and tried to find a human to explain what was going on. Some people pulled out their phones to find how far we were from the event as we started to walk down the stairs into the street to finalize the last mile -- walking. Interestingly, we started to exchange comments that this was already the event for us, connecting, walking, sorting through obstacles - 'nothing is stopping us', as we continued with laughter and excitement.

As we arrived at Bayfront Park the event was underway and the gates were closed. Thousands were outside the fence. Soon people started to lift up the fences and sneak under them, helping each other. From the stage, loud and passionate, speakers acknowledged the massive and peaceful audience. They encouraged us to "intelligently fight for whatever values we stand for". We raised our creative home-made signs: calling for climate action, respect, kindness, health rights, human rights, diversity, patriotic dissent, our future, equal pay, peace, solidarity, respect, respect, and love.

I walked around asking for permission to take pictures and people proudly held up their signs. "All lives matter", was the sign of an elderly woman in a wheelchair, connected to her oxygen. "Equality is my right". "This 'nasty' female doctor won't be silent! Demanding respect and free healthcare for the indigent". So many causes, and so many personal stories behind each single sign.

On our ride back in the train, people were smiling and greeting each other. All strangers, and yet it felt like a village. Later in the evening, as I saw the images of millions gathered around the globe, it was clear to me that this was not a rally against Trump. In a strange way, he seems to be a real catalyst for change, stirring up masses, who become more conscious of their values and of the world they want to shape, and realize that they have to stand up to make it happen. Trump has said repeatedly that it's not about him, that he is representing a movement of change. I am starting to see that this is indeed happening. Not as he imagined, but that makes no difference. The train of change has left the station, and it's moved not by an automated program nor by a person, or a few: it's the Zeitgeist in action. 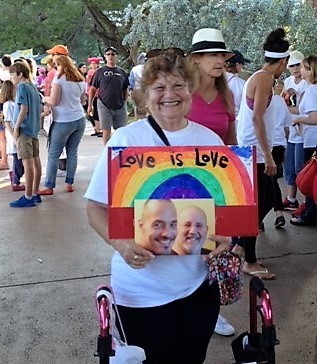