In many places in Latin America the only future a young girl imagines is becoming a mother.

In developed countries motherhood is more commonly experienced as a choice, but in the favelas of Brazil the identity of motherhood is status--a "destination" sought by teenage girls who view the opportunity to have a baby as a validation of their esteem even though they are unprepared to raise a child.

Favelas can be violent places to live. The rules are often different in places affected by abject poverty. And for young girls, pregnancy is often viewed as 'protective' in ways that outsiders may not understand. As it was explained to me, having a baby by a leader in the community associates that girl with a powerful man. That identity can protect her as her child will be recognized as belonging to the leader. This is the destination sought by many young girls.

Changing this idea in the minds of teenagers is not without its challenges.

Associação Saúde Criança was founded in 1991 in Rio and has developed a holistic approach that addresses the needs of these poor families by providing help in the areas of education, health, income, housing, and citizenship. One of the major projects within the organization is "Aconchego Teen." This project started in 2005 and focuses on critical issues faced by poor teenagers and their parents. 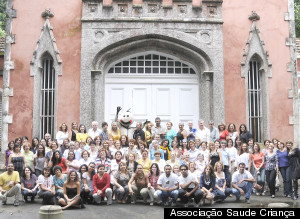 Based on over 20 years of experience, we saw that there was a considerable amount of tension and conflict between teens, particularly girls, and their parents, mostly on the issue of pregnancy and motherhood. "Aconchego Teen," which means coziness, a place for warmth and security, is designed as a public square in which teenage girls receive education regarding motherhood and pregnancy. The objective was to change the embedded view in poor teenagers that suggests motherhood is a destination instead of a personal choice. Motherhood was bound to happen; it was just a matter of time. Here at ASC I work with teenagers offering counseling and self-esteem building activities to make them realize that motherhood is a choice. We provide a neutral space where both parents and teenagers can freely express their views.

The Aconchego Project, sponsored by Johnson & Johnson, spans an average of two years for each adolescent. According to Brazil's Health Ministry on the decade between 2000 and 2010 there was a decrease of 34.6% in teenage pregnancy in Brazil. The project emphasizes other interests and perspectives so that the rate of teen pregnancy decreases. The Associação Saude Criança impact team includes psychologists, educators, social workers and nutritionists. They are considered the differential that helps contribute to this decrease. In the communities and the social class of these teenagers, teenage pregnancy is very common. When they join the project a group that shows other possibilities is crucial for them, so they can identify other perspectives for their lives.

In short motherhood becomes a choice instead of a destination!

So far, over 200 teenagers have participated in Aconchego Teen and the feedback from both parents and teenagers is strongly positive. Not only has the project helped teens understand the difficulties of motherhood but it has also paved the way for a better communication and understanding with their parents. We encourage teens to stay in school and prepare themselves for the labor market. That way, they will experience motherhood when they are ready to embrace the joys of having a child.