It took the Soweto Gospel Choir only a matter of months from its founding in November, 2002 to reach the top of the music world. The group's first album, "Voices Of Heaven," reached number one on Billboard's World Music Chart within three weeks of its U.S. release. The group has recorded and toured ever since, and is now criss-crossing the United States, with its message of unity, energy, and peace. 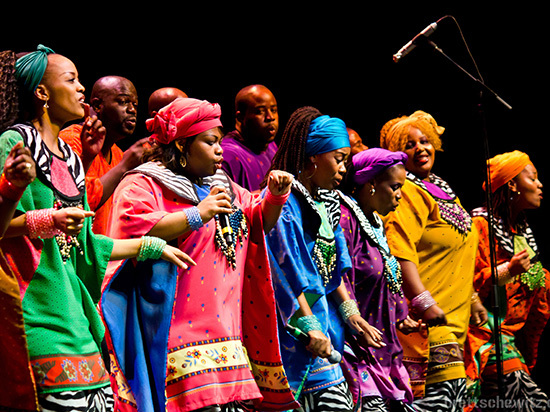 Milton Ndlakuse, the group's director, began singing in his father's church at age 6. On the road now with Soweto Gospel Choir for nine months a year, he spoke with me about how the Choir celebrates South Africa's cultural diversity and above all, its redeemer, Nelson Mandela.

Michael: Does it every feel like a burden or a responsibility that the Soweto Choir is the ambassador for your culture, for your country?

Milton: It is truly an honor, actually, to use the gifts that God has given us. Sharing our music and our culture with people is quite humbling.

Michael: You mention preparation and prayer as two of the major elements in the Soweto Chorus's success. Can you talk about those things?

Milton:. I'm from a very spiritually grounded family. I was born Christian. That made me strong in my belief, to a point where I'm actually sharing with people everything that God has put into me.

Michael: Obviously people go to have a great time and hear wonderful music and see the beautiful clothing, but what's the spiritual message that you want people to take away?

Milton: That's a good question. We're a gospel choir from a country that has eleven official languages, and that describes the community of the choir, because it symbolizes our Rainbow Nation. After from the apartheid era, Nelson Mandela came and we were liberated, and we were one. That's why we call ourselves the Rainbow Nation, because we're a family in South Africa. So the colors represent the concept of the Rainbow Nation. That's what we want people to understand.

Michael: What is the perception of South Africa on the part of the audiences? Do they understand how much the society has changed?

Milton: People understand that we were liberated, thanks to Nelson Mandela. That's part of the message we carry to the world.

Michael: How different are things day by day for you in Soweto? How have things changed since the end of apartheid?

Milton: Well, things have changed dramatically. You wouldn't share your life back then with people from other races. Today, we've got a lot of white people living in Soweto, and we're living in harmony with them. We made peace with them. Since the apartheid regime ended, things have changed dramatically in Soweto. We've opened up parks for children. We didn't have that during apartheid. We have more opportunities for people.

Michael: Why did white people choose to move to Soweto?

Milton: They just like the community. They find peace there. Surprisingly, we've got more shopping malls in Soweto than any other place in Johannesburg, so I think part of it for them to actually shop at those malls!

Milton: Yes, it has become a very different world. We are really, really grateful for what Nelson Mandela did for us. He's our redeemer.

Michael: Do you speak about him or sing about him in the performances?

Milton: Yes, we do. There's a song that's called Asimbonanga. We didn't know what was happening when he was arrested. Up until actually they released him, we had no idea what was happening to him. But during that time, black people sang, "We're with you, we don't know what's happening, but we're wishing and we hope that you're going to be okay when you get out of prison." That's what the song is about.

Michael: Are you educating? Is that part of the mission of the choir?

Milton: Of course. We have kids' shows where we educate people. They ask us questions, so they can really know more about South African history.

Michael: What can people expect if they come to see the group?

Michael: What is the core message about South Africa that you'd like American audiences to understand?

Milton: I'd like them to understand that South African musicians are very versatile. We can do almost every kind of genre of music, and second, as I said, we have eleven official languages. Each and every language has its own genre of music and we can do those as well. So I'd like the American audiences, what I want them to take out is that we are diverse but united as a country. And in that versatility, we have peace.