Two weeks after 9/11, I was booked to perform in Indonesia, the most populous Muslim country on earth. I checked with the American embassy before I left London and they said I would be safe, but that I should be vigilant while in Jakarta.

Upon my arrival the newspaper headlines made me nervous: Muslim radicals were burning American businesses and attacking Americans in the streets. As the Indonesian customs agent stamped my passport, he said to me: "You are American huh? Aren't you afraid to be here?"

It dawned on me that playing Jakarta might not be such a good idea. I was advised not to leave my hotel and so I sat on my bed and watched the local TV news in horror. Mobs of people burned American flags. 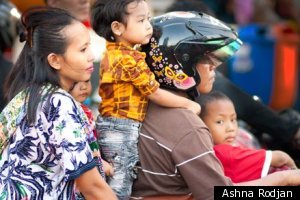 The two comedians from England that I was to work with were too afraid to come and never boarded the plane from Heathrow. This left Eamonn, the promoter, with a last minute scramble to find any acts he could who could open the show. There was a cruise ship from Australia docked nearby and he found performers to fill the vacancies on board. The first act was a slight of hand magician. To a table of 4 people close up that might be entertaining, but it died a horrible death in front of the 200 person audience.

The next act was a guy dressed head-to-toe like Crocodile Dundee. He called himself "Kangaroo Jack" and his opening line was: "My name is Kangaroo Jack, I throw my boomerang and it comes right back." His big joke that I remember was "My wife came home and caught me with my dick in a jar of peanut butter. She said, 'What are you doing?' I said, 'I told you I was fucking nuts.'"

I recall people in the back of the room reading newspapers during his set.

When I came on, my opening line was: "Well, I don't think I have ever seen a foreign audience so happy to see an American before." 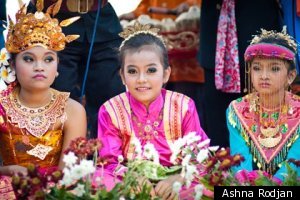 To my great relief the crowd howled with laughter. I went on to crush, winning them over from the start. One of the biggest laughs I got that night was when I said, "You see these people in the Middle East burning American flags all the time. There must be a store there that only sells American flags. And when you buy it the guy behind the counter says 'Do you want matches with that?'" That night it felt good to laugh and I pointed out the obvious elephant in the room, my being an American in a place where I was truly unwelcome. The laughter was a cathartic release for everyone.

On the way to the airport after the gig, I asked the promoter why people hated Americans so much. He said, "Because they are stupid. Because they don't know any better. You represent what they think they are supposed to hate, the decadent west and all of your evil ways."

As the jet wheels lifted off of the tarmac and I ascended into the sky, I was relieved that nothing dreadful had happened to me. I thought that I would never again return to that place.

Eamonn has credited me for years with saving comedy in Indonesia with the performance I gave that night and has periodically invited me back. When I did finally returned, it was just after Osama Bin Laden was killed.

Nearly ten years after my first visit I was back in the same hotel, but the city seemed different. The traffic in Jakarta is still disgusting, but at least this time I was free to leave the hotel without the fear of being attacked. Barricades with security checks greet you everywhere in the city, though they seem to be mostly for cosmetic appearances of safety.

Friday night after my show, Eamonn took us to a night club called "Red Square" a Russian-themed vodka bar where the bar tenders dance on the bar with fire torches. The place was packed with hot young Asian women and their older, whiter suitors.

"The women you see here are not prostitutes but what I would call enthusiastic amateurs. They will have sex with you and then probably just ask you to give them cab fare," Eamonn said.

I jokingly exclaimed: "300 dollars! Where the hell do you live? Sumatra?" Eamonn laughed and I was happy that he had persuaded me to return. 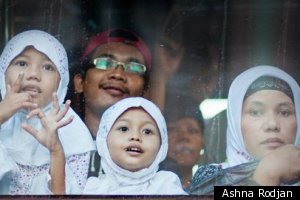 After our Saturday night show at the Mo bar a blues band played. Three young men no older than 20 years old got up and ripped the ass off the joint. The drummer thumped the skins with the biggest smile across his face as they all seemed to be clearly enjoying what they were doing. The lead singer and guitar player was mesmerizing. His finger tips made love to his guitar's fret board as he peeled off the grittiest blues classics. For such a young man he was feeling every note and lyric, howling out numbers by Muddy Waters, John Lee Hooker, Stevie Ray Vaughn and Jimi Hendrix. If you closed your eyes you would have thought you were in a chicken shack blues joint deep in the Southern United States.

The band is called 'The White Orchids' and I talked with the singer after the show wanting to praise his ability but it turned out that the kid did not speak one word of English. Eamonn translated for me. I asked him how three young Indonesian men knew the blues so well and he told me that, his "high school music teacher introduced us to it and now it is our life. It is our religion because it speaks to every religion and all the people. Everyone knows and understands the blues."

I loved this kid so much I wanted to hug him because he was the exact opposite of the Muslim radicals who ten years ago were calling out for the death of Americans and despised American culture.

The view from my hotel room was the same as it was ten years ago, it was a view of a massive traffic circle around a fountain. At all times it is a cluttered log jam of cars barely moving. On our last day when I woke, I looked out the window to find not one single car in the circle. It was a car free day. Only a few kids on bicycles rode around on the empty pavement. Later in the afternoon the circle filled up with pedestrians. A parade to celebrate Jakarta's birthday commenced. My wife and I went down to take photos and join in the celebration.

We got to talking to a group of women wearing beautiful headscarves and one told me that they belonged to a Beatles club and once a week they all got together to sing Beatles songs.

I said, "You're kidding me, really? My favorite Beatles song is 'We can work it out."

Everyone started singing: "Life is very short and there's no time for fussing and fighting my friend."