It's strange to think how we can now watch the BBC's "Planet Earth" on Netflix, curled up in our pajamas with all the blankets, cookies and other creature comforts we want. Strange, because to bring us all those gorgeous and intimate shots of our planet required the tireless efforts of dozens of filmmakers braving grassy plains, open ocean, lush jungles, stormy deserts and Arctic blizzards across the world.

The Huffington Post dug into "The Making of Planet Earth" documentary and talked with some of the producers to see how they were able to capture the incredible shots we see in the series. It wasn't easy. The team following gibbons around the jungle suffered 50 to 100 leech bites per day, producer Tom Hugh-Jones told HuffPost, and their subjects were easily spooked by the sight of cameras. Other teams faced gail-force Arctic winds and the threat of sharks in the open ocean.

But the "Planet Earth" team did have one luxury: time. As the network's most expensive documentary to date -- $25 million over five years -- each shot was painstakingly produced. Cameraman Andy Shillabeer told HuffPost how he spent weeks and months creating time-lapse footage of cherry blossoms in Japan, desert flowers in Death Valley and leaves changing in the Northeast U.S. All for footage that would fill just seconds in the final cut.

Here are some other incredible stories from the making of one of our favorite nature documentaries:

Producers picnicked together when working on "Caves." Three weeks into filming, they realized the drops of liquid that would fall from the ceiling onto their lunch were bat pee.

The team spent a month living in Borneo's caves -- the most putrid filming experience out of anyone who worked on "Planet Earth." Among the animal excrement, the caves were filled with millions of cockroaches and venomous centipedes that moved like lightning, according to production assistant Chadden Hunter. "It was generally a month living like Gollum," he told HuffPost. Getting down into the caves took over an hour of sliding and contorting themselves between the rocks, and even armed with white bodysuits, creepy crawlies would still sometimes find their way into the filmmakers' clothing. At any moment, too, shiny blue snakes could drop from the ceiling "like Indiana Jones and the Temple of Doom," Hunter recalled.

As the filmmakers sought to film the world's largest pile of guano, they were challenged by the fact that walking the camera up the mound was impossible -- they'd sink right in. So the team improvised, Hunter explained, rigging a 100-meter cable alongside the poo so they could pull the camera up for a shot as smooth as any of the series' trademark aerial scenes. But more disgusting.

"Planet Earth" crew filmed that dramatic snow leopard hunting scene on the border of Pakistan and Afghanistan when the world was hunting for Al Qaeda.

The snow leopard scene is the result of three years' worth of effort by a total of eight crew members and 20 local trackers. Numbering only 3,000 to 7,000 in the wild, snow leopards live in the high mountains around central Asia. Producer Doug Allan spent nearly three months in northern India trying to capture the animal, and came away with an hour of snow leopard footage -- asleep for nearly all of it.

Later, after a year of delays due to the international terrorist manhunt, filmmakers tried their luck on the border of Afghanistan and northern Pakistan. They dressed like locals to blend in, but for six weeks, saw nothing.

"We're sleeping in caves up in the mountains," Hunter explained. "Then you start looking at yourself in the mirror and see your beard growing and think, 'Uhh, maybe this is not really the best look to have as the world is looking for Bin Laden and we're up here filming snow leopards.'" As they began to lose hope, producer Mark Smith relocated the camera gear to a different spot in the mountains on a tip from locals, and the team was finally rewarded with a shot of a snow leopard and her cub. Finally, as they were about to pack up for good, the dramatic hunt scene unfolded (shown above).

Producers dragged all their camera equipment two miles in 100-mile-per-hour winds to film penguins in Antarctica.

We bet it felt like going uphill both ways, too. With gale-force winds and temperatures over 100 degrees below zero, the struggle to reach the penguins' colony was a difficult one for filmmakers Wade Fairley and Frederique Olivier, who spent a year living near 20,000 Emperor penguins.

"I really feel quite sorry for them at this moment," Fairley says into the camera as the team warmed up in their hut. When the filmmakers reached the animals, they found them huddled close together to block out the weather, rotating members from the outside in when they got too cold.

"We went into a battle zone," while filming a mother humpback whale and her calf, producer Mark Brownlow told HuffPost. Male humpbacks were trying to mate with females, in the process bulldozing their way past the boat in the water. Brownlow recounted some of the "hairy moments" the team had trying to film the mother-calf duo, but cited the whales' intelligence and spacial awareness for keeping the crew safe.

"Despite the fact they're hurtling past you like freight trains, they always choose to just slip past you and never actually make physical contact," he said. "They may approach you right on the side and look at you with their little piggy eyes, but they're gentle giants."

It took about 300 hours of filming to capture the bird of paradise.

Producer Paul Stewart's solitary birdwatching vigil in the remote highlands of New Guinea started at 3:45 a.m. and lasted eight or nine hours each day. His goal: to witness the bird's colorful mating dance.

"It seems the bird of paradise is the original early bird," Stewart explains in the documentary. Luckily, the team had New Guinea's Huli people -- who'd actually been left undisturbed by modern civilization until the 1950s -- on their side. A local expert helped the "Planet Earth" team set up hideouts for Stewart's long, mind-numbing wait.

"It's rather like standing on a train station on your own, waiting for a train that may or may not arrive," Stewart said, explaining what it was like to sit in the tiny hideout, "like a sweatbox" with one very tiny window. "It's a bit like that, only not as interesting."

The Gelada baboons would try to involve the filmmakers in their family drama.

In the six weeks they spent filming Gelada baboons on a lush plateau in Ethiopia, the "Planet Earth" team got to know the animals' personalities. Although the filmmakers tried to stick to their "Golden Rule" -- don't disturb the animals -- the baboons made it a bit difficult, Hunter explained.

"They tried to draw you into their little games. The young ones will try to play with you," he told HuffPost. "They'll come up and see if you're any fun -- they'll play with your shoelaces." And when the males fought, sometimes one would come sit next to the filmmakers and stare back at his opponent, casting the humans as his personal allies.

"You'd have to avert your eyes and not stare at them. Basically say, look, I'm not taking sides. I'm just neutral."

The crew rigged a doorbell to a high-speed camera designed for car crash research to film sharks hunting off the coast of South Africa.

In "Shallow Seas," the "Planet Earth" crew captured amazing high-definition slow-motion footage of great white sharks leaping out of the water off Seal Island. The studio camera featured a buffer, and pressing the doorbell "trigger" the crew had attached to it set the camera recording one second prior to that moment. (It backed up all footage to a large computer database -- no time-travel required.) That way, each second slowed down into 40 seconds of crisp footage.

Watching lions hunt young elephants at night to feed their own cubs -- who hadn't eaten for days -- was a "brutal" experience.

"Planet Earth" crew rigged infrared lights and used special cameras to capture the lions on film without disturbing them, since infrared is invisible to both human and animal eyes. Lions have excellent night vision; elephants are at a disadvantage. The crew tracked the predators, set up their equipment, and then watched from the (relative) safety of their vehicles.

"There's a funny thing -- when you're in the vehicle, they don't seem to see you as a human being. But one step out of that vehicle, and that would have been it," camerawoman Justine Evans explains in the documentary. (There was actually nothing to stop the lions from leaping in.)

"It was a very raw, rough, brutal look at our lives," Evans says.

In the days before drone footage, Planet Earth producers relied on helicopters ...

In 2015, it's easy to forget how quickly camera technology has evolved over the past decade. The series' smooth, sweeping shots of wildlife could be easily attributed to drones -- except it was actually a much more labor-intensive process.

Crew attached a Cineflex camera, originally developed for use in the military, to the bottom of a helicopter. With help from Hollywood cinematographer Michael Kelem, producers were able to zoom in closely on their subjects from high above, leaving the animals undisturbed. That's not to say it was easy -- the scene in "Pole to Pole" showing wild dogs on the hunt took over 50 hours of flight time to capture, in collaboration with a ground crew. And producers were at the mercy of the day's weather as they tried to get a good shot of polar bears walking across ice.

... And even hot air balloons.

Although seemingly antiquated, these were actually the best way to shoot forests without disturbing the leaves on trees, as a helicopter would have done.

"We worked with slightly madcap French guy called Dany who invented this thing called the cinebulle," Hugh-Jones told HuffPost. The cinebulle is, essentially, a camera attached to a hot air balloon. It's a quiet, noninvasive way to film wildlife, as long as you can control it -- which proved difficult, as the contraption crashed into a baobab tree in Madagascar with "Planet Earth" cameraman Warwick Sloss on board. Luckily, no one was hurt. And after fixing it up, the team captured the mesmerizing shots you see above, allowing us to see even motionless subjects as the living spectacles they are.

All images courtesy of BBC Home Entertainment. "The Making of Planet Earth" is available on DVD and YouTube.

Filming 'Planet Earth' Was Even Crazier Than The Documentary Itself
Nature&#039;s Astonishing Natural Disasters 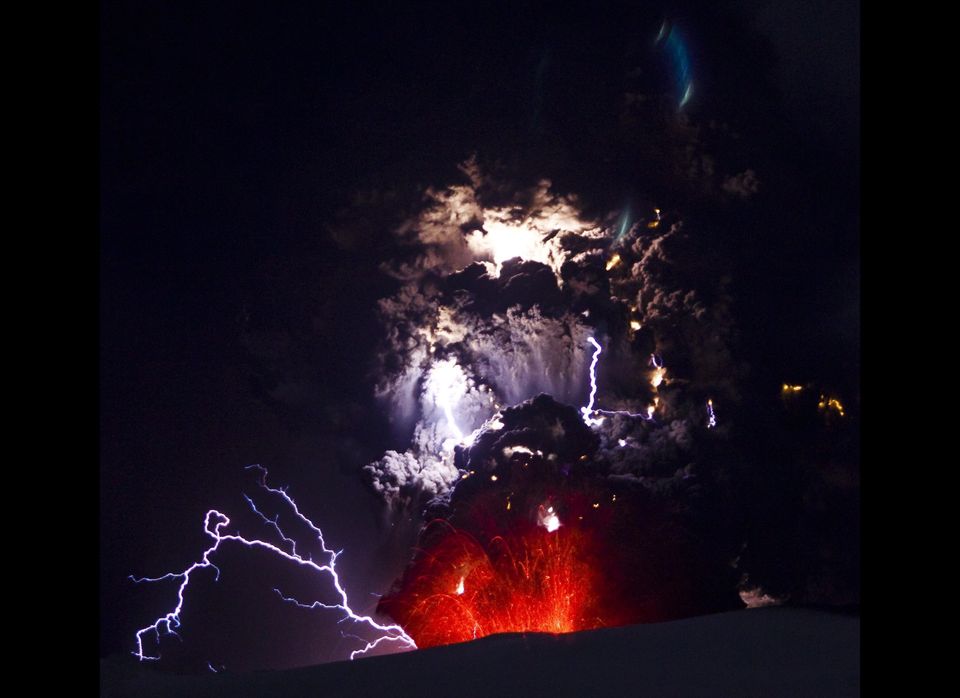 1 / 23
Lightning is seen within a cloud of volcanic matter as it rises from Eyjafjallajokull volcano April 18, 2010 Eyjafjallajokull, Iceland. A major eruption occurred on April 14 which resulted in a plume of volcanic ash being thrown into the atmosphere over parts of Northern Europe. Air traffic has been subject to cancellation or delays, as airspace across parts of Northern Europe has been closed. (Photo by Terje Sorgjerd/Getty Images)