Divorce is awful. No matter what leads to it and no matter if the parties involved are better off apart, it's still a jarring and life-altering thing, especially if kids are involved.

My divorce, 17 years ago, was no different. In the annals of awfulness, it was epic. However, the wounds are no longer fresh, and mistakes made so long ago aren't relevant to our lives today. And our kids, perhaps in spite of us, are functional, happy adults.

But here's something I wasn't expecting: In the trenches of my worst behavior and my most grievous failures as a human being, I made a friend. She was right there with me the whole time, but not in the way one might expect.

She was, and is, my ex-husband's wife.

Don't get me wrong: Deena was no Mother Teresa. I wasn't her favorite person, either, and she pulled a dirty trick or two. But I think she would have been willing to extend the olive branch pretty early, if I had been willing to accept it.

On Real Housewives, the women's arguments are petty, ridiculous and exacerbated for dramatic effect. I guess I could have started that franchise, because I where Deena was concerned, I perfected the art of drama to the "nth" degree. There was no hair-pulling, but there were wars of words. Sometimes I won. Sometimes I didn't. But my kids always lost, and that was the hardest thing to bear.

Bottom line: I hated Deena, or believed I did, because I didn't like myself a whole lot and was insecure about my most sacred role, that of mother to my kids. I didn't want to feel as though that position was being challenged. Looking back, though, what did I want? For Deena to be mean to my kids?

Of course not. I just didn't want them to like her best.

I'd like to say a thunderbolt struck me one day and caused me to see the light, but what really occurred was the simple passage of time. As cheesy as it sounds, as I grew to become more confident in my own skin, I was able to take a step back and see Deena as a person. And that person really wasn't out to usurp my position, make me miserable, or steal my children.

Things didn't become rosy overnight; Deena and I are very different people. I'm a feeler; she's more a thinker. I work hard to be tactful; she's very direct. I'm an indulgent parent; Deena was independent early in life and expected the same of the kids. She and I are sometimes on opposite sides of the fence. But as is true in many relationships, we actually complement one another.

As we plan my daughter Caroline's wedding, we chat daily. And even the planning works well; I have grand visions for the big picture, and she has knack for details. In addition, we have some personal things in common now; we're both careful with our nutrition, and we both run.

Most importantly, we have my kids in common. Oh, how it would have pained me years ago to say this, but my kids love Deena. They love her in a way that is not at all competitive with the way they love me, but they are grateful for the time and resources she has committed to them. Most of all, they love her because she loves their dad.

From Cinderella onward, step-relationships have been fraught with competition and misunderstanding. But what I finally came to realize is this: My and Deena's shared feelings are what bond us. I once was married to the person she is married to; from that relationship came two children. When Deena married that man, it linked her not only to my children, but to me.

I've often thought there should be a word for Deena's and my relationship: As we've joked, "sister wife" is a contender, but doesn't quite cut it. Whatever the nomenclature, evolving from "real housewives" to "sister wives" was no small task. The relationship we have now benefits my kids, to be sure, but it also benefits us.

What they say is true: Letting go of negative feelings is healthy and freeing. I'm laughing with the person who used to be my sworn enemy. It's possible for a cold, hardened heart to thaw, even when it's your own. 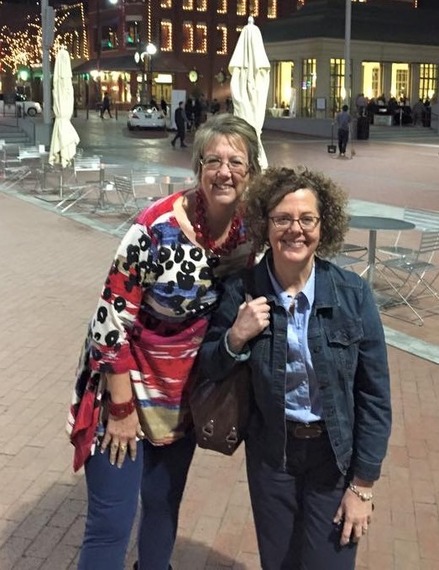