This year the Oscar nominees were announced on January 15, which happens to be the actual birth date of Martin Luther King Jr., so what could be more appropriate than a Best Picture nod for Selma, the stirring civil rights drama that features him? The movie's script did not get nominated, however, and perhaps this is related to the controversy swirling around its portrayal of President Lyndon Johnson.

A top Johnson aide has called on people to stay away from the film altogether, even as some of its defenders charge that such powerful (white) men cannot stomach a project by an African American woman, one that privileges grassroots agency over the perspective of official Washington. So with Selma having opened nationwide recently, let us take stock of the ongoing debate.

As a historian devoted to chronicling history from the "bottom up," I found Selma to be great in dramatizing this saga of civil rights activists putting their bodies on the line for the sake of democracy's bedrock principle: the right to vote. Director Ava DuVernay draws us -- hurls us -- into that time, having us accompany Martin and Coretta Scott King to Oslo for his Nobel Peace Prize, only to have have a bomb blast interrupt our reverie, murdering four little children on their way to Sunday School. That this tragedy in fact took place the previous year does not matter, for the dramatic license serves the historical truth, with so many African Americans -- including King and his family -- in constant danger of racist attacks.

In this and countless other scenes the director conveys the emotional reality of the movement without sacrificing historical nuance: no mean feat. Indeed, when the estate of Martin Luther King refused to allow DuVernay to quote from his talks, she brilliantly utilized her invented speeches to relay historical factors that furthered the storyline. Thanks to the film, my students will grasp the deep significance of this totemic civil rights event. 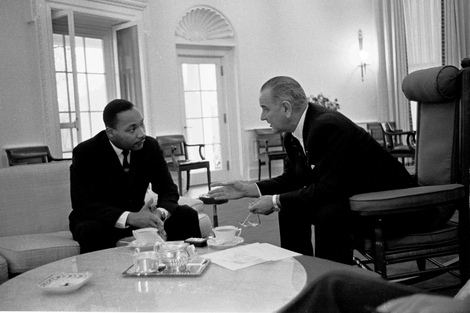 The film has the civil rights leaders, not the White House, drafting the bill and also cuts out the central Johnson administration role in the crucial court ruling that protected the marchers from the Alabama state police. Worse, Selma has the president ordering the FBI to spy on King at that time, when it was the FBI Director who considered him a menace and wanted to weaken the voting rights movement by harassing its leader. As the historical record makes clear, LBJ was in favor of voting rights, and MLK knew it, with any disagreements purely tactical ones.

Selma's distortion with regard to LBJ is a shame, given that overall the film is so fine. And, yes, this motion picture is itself historic, as the project of an African American woman. But what a scandal that such a turn of events should still be historic in 2015. And what a scandal that the Voting Rights Act itself has been eviscerated by the Supreme Court: the same court that has sanctioned the outsized influence of money in the political process.

"It is important for the people to remain vigilant and struggle against these new devices. As Martin Luther King Jr. said, nothing can stop the power of a determined people committed to make a difference," Congressman John Lewis reminds us. This year, as we mark the fiftieth anniversary of those voting rights actions in which Lewis almost died, let us redouble our efforts against the threats to our democracy.