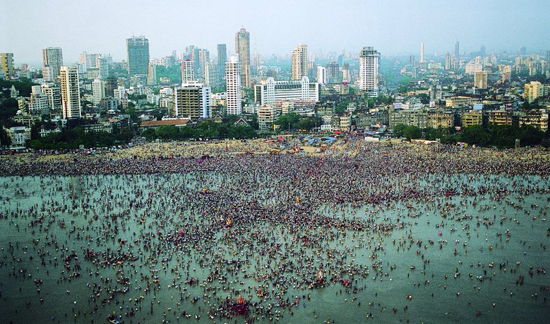 The London School of Economics' Urban Age Project has published its second and just as heavy volume about the planet's most favorite subject: its cities. The first was called The Endless City, and the second is about living in it. But not really; rather it is evidence that the Urban Age Project has spread its wings to incorporate even more cities into its purview.

Big tends to be the preferred format for books on cities, perhaps evidence that the topic makes us lose our editorial minds. Big also references this project's self-induced Herculean task: to make some kind of sense of the city as a phenomenon. Just about every writer in this installment makes it clear: each city is unique. But that doesn't settle our craving to look for what makes a city a city. There must be some kind of infectious fantasy which makes us think: if we could just get to their DNA, we could understand and therefore change cities.

One of the first efforts to acknowledge that cities might share some characteristics and that the world was facing a potential urban-generated disaster was Planning of Metropolitan Areas and New Towns, a report issued by the United Nations in 1967. Like the Urban Age Project, the report put 'developed' cities in the same petri dish as 'developing' cities. The UN report includes some shocking moments of dramatic irony -- like when the panel of experts still wonders whether the automobile will be an adopted means of transportation in African and Asian cities. Comparing the UN report to where we are today in understanding cities is heartening in some regards. Back then, cities were being taken on by planning to denude them; the British new town strategy was almost always the preferred one. The solution for the city was essentially to destroy it.

Fast-forward to 2011 and the new town hardly plays a role. Urban planning has taken a back seat to economic planning, if, as some of these writers suggest, there's any planning at all. The world's largest cities have become even greater behemoths, but no one in this book dares to suggest turning our backs on them. There's now little belief in our ability to design them; but can we at least come to terms with them?

Deyan Sudjic plays the book's inter-urban itinerant who gives a brief introduction to the three inaugurated cities: São Paulo, Mumbai and Istanbul. Before embarking, he dares to consider whether the architect might still have a say in all of this density. The bold metropolis -- and these three cities are some of the boldest -- have brought about the crippling of the architect's role in shaping them. Sudjic's catalogue of suggestions for reinvigorating the architect's role, however, is a let-down, if not a string of non sequiturs. For one, Leon Krier inexplicably gets more than just a mention. Zaha Hadid's coppertone skyline for Istanbul is reviewed for all the wrong reasons (it's the evidence of the problem, not the solution). And then there's the suggestion that one ultra-rich man's vertical villa in Mumbai has given us a new building type: who cares. If this essay is any forecast of the architect's fate, then it is still dim.

Cities have become an approachable topic in popular media. That is a good thing and, if not burdened by its own weight, this publication might be reaching out to broader audiences. Sometimes, however, the popularity of the topic has led to grave misunderstandings of what cities are. This book usually acknowledges what some, mostly American, authors and groups often overlook, namely that when we talk about half the world living in cities, we're mostly not referring to Toledos and San Franciscos. We're talking (mostly) about conditions experienced by people who do not likely read this book or gawk at its pictures. And their cities are in focus here.

The book calls upon some of urbanism's celebrities. Sociologist Richard Sennett has two essays. One is an unexpectedly naive call for what he considers a new kind of urban design. Just one example of the naivete is that Sennett blames planners for doing things they never had the power to do in the first place. His other essay, in the Istanbul section, brings up a nice, explorable thesis: the Hinge City. This kind of city exists and thrives because it connects distant, disparate places. Comparing ancient Venice to current day Istanbul, Sennett captures how cities can capture the impermanent and ephemeral. Then Hashim Sarkis puts some meat on Sennett's abstraction with a thoughtful article on Istanbul's relationship with the Arab world. Once again, it is demonstrated that some cities have no boundaries.

Sennett's hinge idea functions as a foil to one that Saskia Sassen touches upon in her introductory essay, but leaves frustratingly unexplored: that a city's physicality, its buildings, are its attempt at permanence. Unfortunately the idea gets muddled with other topics. Two of those are: her criticism of the 'creative class' movement and her questioning the assumption that every city should be phasing out its manufacturing industries. The two are related in some ways, but the former has little function in this book. I am always curious to read criticism of the creative class propaganda, but it is misplaced in this book. Sassen's essay might include the book's gravest example of mixing apples with oranges, or Toledos with Istanbuls. In fact, Toledo is one of her examples. Mentioning Toledo in a book like this is on par with mentioning Leon Krier. Istanbul confronts a Hadid skyline not because it wants to attract a 'creative class'; yes, it pursues a knowledge-based economy, but at what expense? The Hadid skyline is for investors, and Sassen has written about speculative markets before. She misses her chance to develop that idea. Appreciating the role of manufacturing is also a necessary topic, but this essay comes off disjointed.

One of the best guiding articles is written by a Harvard law professor, Gerald Frug. Clear and concise, Frug reveals the complexity that most of these writers, many of whom have written about it before, fail to consider. When others artlessly proclaim what cities should be doing to improve their streets and buildings, Frug reminds us it is not necessarily people living in the cities who determine the urban conditions. He makes a quick case that each of these cities is not a self-serving engine; rather each is the cash cow for the country it inhabits. The argument calls out the absurdity in an earlier statement in the book: '...since the birth of the nation-state [cities] have been a cosmopolitan alternative, offering tolerance and freedom.'

This second publication is a laudable distillation, if not maturation, of tactics and language that architects, planners, etc., have been building up over the last decade or two. Some of these tools: the ambition, the fixation on data, the subsequent doubt about what to do with that data (taken on dexterously by Justin McGuirk), and the photographs. Oh, the photographs. This last aspect is where I would challenge the group. To warn of the dread which cities might bring upon our planet and then to seduce us with these kinds of images is double talk. Photographs like these have been described before as a kind of pornography. That's because they generate a feeling in us perhaps we don't like to admit, at least in public. Taken from the safe distance of a helicopter, or maybe the fifteenth floor of a Sheraton, the shots are of a tantalizing tactility. But those of us who can afford to buy this book are struck with shame for wanting the experience because we know we couldn't handle it. Jacob Riis created a movement. These just create secret desires that make us insidious voyeurs.

Photography, the medium that could most quickly draw us in to the turmoils of these megalopolises, is therefore the most guilty for keeping us from them. Beyond just in the photographs, these cities often come off too clean. The slums (rarely mentioned more than as an aside), the political criminality, the paradoxes, the stench of these places are somehow rubbed out. Their uncanny absence in this tome reminds me of how Mike Davis plunged us into these predicaments in Planet of Slums, and without a photograph.

In a commendable piece on Mumbai, the journalist Suketu Mehta delivers one of the book's best anecdotes. He recounts an award ceremony for 'a group of local residents' in Mumbai. They had a designed toilet. The German Chancellor Angela Merkel makes a cameo:

The prizewinners came in a bus to the grand hall, dressed in ill-fitting suits that they had rented for the occasion. When Frau Merkel gave them the cheque, they accepted it with grace and shook her hand, but when they encountered the municipal bureaucrat who was in charge of their [residential] area, they knelt down as one and touched his feet in reverence. They knew who had the power....

These microscopic kinds of mismatches reveal the scale-blowing complications at hand. 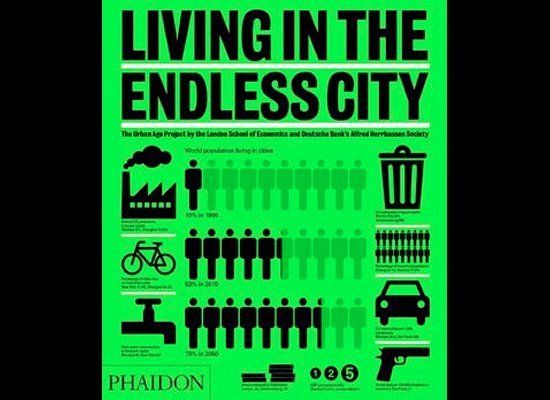