I received many emotional responses to my first blog post about my father and his company Christmas party. Most of you who wrote me said that every day, you struggle with the same problem: how to make small talk with Westerners.

This issue is not limited to Chinese but rather is universal to all immigrants as well as to people working across cultures. This is what I received from George Pontiakos, a Greek-American who I placed as the North America CEO for a Hong Kong conglomerate:

"Being of recent immigrant roots myself, I saw the same situation with my grandfather and father. Their dynamic personal confidence never was able to transition effectively into their professional life."

My own struggle with small talk My father is not the only person in my family who has suffered through this journey. As a child growing up in the States in the 1970s, I was referred to as "chink" or "slant-eyes" by the other kids at school. We spoke Chinese at home, and didn't watch much TV, so I was always behind in my English. For years after I caught up academically, the hardest part was the socializing between classes and after school. When the other kids were joking around, it seemed that on the rare occasions that I came up with the right thing to say, it was always 60 seconds too late.

The pain and embarrassment of all those years was tempered by the books that became my friends and refuge. Books taught me to read and write well in English, and over the years, those skills carried through to my spoken English, in school, in social situations, and later into the professional and public spheres. 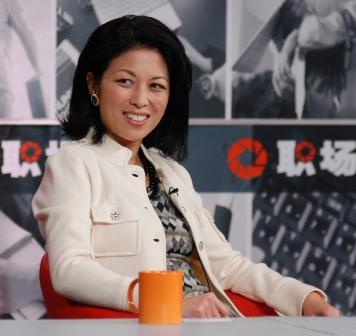 As for me, I've Americanized, and the struggle now is to learn to speak Chinese well. As you can see from my recent appearances on Chinese national TV, now it's my Chinese that's limited, and when you're speaking a 2nd language, joking around is the hardest part. (That's me pictured here on Chinese television. To view the segments, click here.)

Becoming fluent in a new language and culture is a process that takes years, and unfortunately there are no shortcuts. It's much to help you with this transition that I started this blog. I make references to American pop culture throughout. And while the blog is translated into Chinese, I write it in English, in an everyday style, the way that we Americans talk when speaking with friends. If you subscribe to this blog in Chinese, each email contains a blog post first in Chinese and then in English. To subscribe, simply go to www.globalrencai.com, and enter your email address in the upper-right corner.

For you who struggle with small talk, you are not alone. Your experience is shared by millions of talented, brave, exceptional people everywhere, who are climbing toward success in a new global culture, and who ultimately are shaping that culture as well. I dedicate this blog to all of you.

Comments in English and Chinese are welcome, on the Chinese version of this blog post, which is here.