"Honey, you've had enough time on the iPad for now. Why don't you go play for a little while?" I recommended to my 5-year-old daughter.

"But there's nothing to do!" She responded/complained predictably. "And you're on your phone," she added.

She was right. For all of the times I am telling her that she could be playing with her dolls or throwing a ball around outside with her brother, for the endless reminders about the myriad of board games she has and the library of coloring books and art supplies to go with them... I must look like a pretty big hypocrite to my child.

Though my days of playing with Barbie, Ken and Skipper and building elaborate condos for them out of my wooden blocks has long passed ("Three's Company" was quite popular at the time and the dynamic of their living situation seemed perfectly normal to me), I still catch myself spending much more time on my phone than I should. I have written before about my overuse of apps like Instagram and Facebook and how I felt that they were impeding my connection with my family, and have successfully curtailed my use (abuse?) of them since. While there are times I have found myself falling back into old habits, I have been able to reel it back with ease once I see it happening.

But while my phone may not have been pointed at my children quite as much, it was quite often still in my hand.

While I told my children to read a book, I was scrolling through the news on one of the apps on my phone, or reading a book I'd downloaded on my Kindle, rather than the latest hardcover I'd been coveting or reaching for my copy of the New York Times that was usually sitting on the dining room table. Though it was beautiful outside and I'd suggested that the kids enjoy the outdoors by playing ball in the backyard before dinner, hours earlier, I'd sat in the pick-up line at school in my air-conditioned car browsing on Gilt and ordering groceries on Fresh Direct, rather than stepping out and enjoying the sunshine and chatting with fellow parents I'm friends with. To be honest, I'd actually been texted with one of them who was in the car just behind me!

And then I had the above interaction with my daughter. And like many epiphanies, mine didn't hit me the first time we had this exchange. Or the second. Perhaps the tenth?

"You're right," I told her. Once she got over the shock (and glee) of my statement, she added, "Now what?"

And so together, we came up with answers to that question. 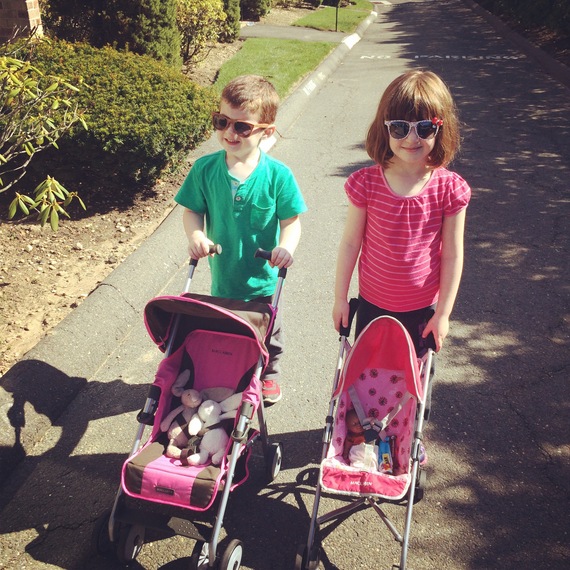 On sunny days, we go for walks, often with both of the children bringing one of their favorite dolls or animals along in their strollers, or we bring brown paper bags out and go for Scavenger Hunts with each of us taking turns deciding what we should look for next among the flowers, leaves, rocks (and hopefully not poison ivy!) that we can explore and discover near our house. We plant vegetables and flowers together, and go to the playground or to cheer on their father at one of his softball games.

When the weather isn't quite as cooperative, we have endless rounds of hide-and-seek with balloons all around the house, assemble art projects we've gotten from the most recent Kiwi Crate we received or from our own imaginations. We go to the library and take out books -- picture books for my son, early readers for my daughter and the most recent hardcover memoir for me, and they often "help" me -- though that is a strong word for it -- cook dinner.

There is a construct of writing that insists that we show, don't tell, and so much of that also reflects our responsibilities as parents. The old adage of do as I say, not as I do seems as dated as the saying itself. Children look to us, not just for direction, but also to lead by example.

So there are times when they see their parents sitting at the dining room table with steaming cups of coffee on a Sunday morning with The Times spread out before us, and there are moments when we are looking at our phones or laptops checking our email. There are moments of the day that we are playing games like ping pong and basketball that involve a ball and a net, and others that call for Netflix.

And going low-tech or no-tech is both good and fun, but I'm not going to pretend that we're at 30,000 feet and have turned off all electronic devices for the remainder of our flight through their childhoods.

There is a time and a place for both -- just not all the time, and not every place.

After all, where would I get ideas for all of those art projects without Pinterest?

More:
technologyplayingParenting InternetChildren
Newsletter Sign Up
Raise the kind of person you'd like to know
Subscribe to our parenting newsletter.
Successfully Subscribed!
Realness delivered to your inbox