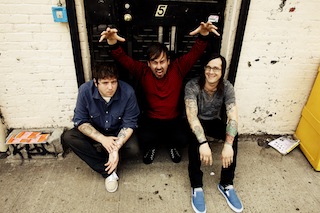 The new band Terrible Things have enough of an interesting back story that success is almost irrelevant. Well, not exactly but the subject of their debut album matched with past experiences of two of its members sure would make one hell of a rock-and-roll themed afterschool special one day.

Fred Mascherino and Josh Eppard both left their highly successful bands at arguably the height of their fame. For Mascherino, lead guitarist for Taking Back Sunday, it was to pursue other creative endeavors. For drummer Eppard? He left Coheed & Cambria due to a drug addiction. Together with Hot Rod Circuit Andy Jackson, the duo have been recharged and ready for stardom with their debut album, which is about fires that ravaged Mascherino's former hometown of Coatesville, PA. Not exactly the feel-good album of the year, but definitely a powerhouse.

I spoke with Mascherino and Eppard, and asked them to discuss their concept album, their formation of a new band, and of course, the impacts of leaving their previous bands at their respective peaks.

Josh, Fred...you both left your highly successful bands for different reasons. Why did Terrible Things make sense to join after those abrupt departures?

F: There aren't very many people that know what it's like to leave a successful band when it's at its peak. I'm still being asked everyday why I did it. Josh is one of the few people on the planet that can relate.

J: Yeah, we've experienced those big ups and downs and this band is really a chance for us to build something from scratch and do it in our own way. We all talk about goals for the band but I would say a big one is just to be happy and proud of what we're doing.

So were either of you gun shy from past experiences?

F: I think we were gun shy at the time we left those bands. We all, including Andy, spent two years after our bands doing different solo projects, but eventually we missed the social aspects of being in an actual band and playing with people you have a mutual respect for. By the time we met up, we were all anxiously looking for something that was going to fill a void.

F: We were definitely trying to get away from the things we were used to, or maybe sick of. I wanted to free myself from writing habits by getting out of my comfort zone. Our producer, Jason Elgin was a southern gentleman that didn't know much about our pasts or the whole music scene up North, but he knew way more than we did about Tom Petty and Mutt Lange.

J: Yeah, that gave us somewhere to go with the songs. It didn't have to be about those old bands, with the same old sounds.

F: It could've been that way coming from big bands but instead of letting the past intimidate us, we could evolve and focus on the future.

Did the three of you know each other beforehand? If so, how has the relationship evolved as Terrible Things?

J: Fred's old band, Breaking Pangaea took Coheed and Cambria out on their first ever tour and they showed us the ropes. I was always a fan of his Fred's writing and we stayed friends over the years. We didn't know Andy as well, but Hot Rod Circuit was always around and we were all fans of each other.

F: It's awesome now that we've done a few tours together. The fact that we all have ten years of touring experience behind us, we're able to avoid some of the things other bands would have to break in.

So, why Terrible Things for a band name?

F: The name comes from a song on our album that I had written a while back. "We're doing terrible things" is the chorus. When we chose it as our band name, I re-wrote all the lyrics on the verses to fit some of our story. "It's just a cry for help, Damnation, Redemption, the cycle..."

J: It's no secret that I battled with drugs when I was leaving Coheed. I should have died... That's all part of my history. But this band really is about redemption. One minute I was on MTV, and the next, all my money was gone and I was painting houses for money. Andy and Fred are my brothers now and this is our chance. I really believe this is the best record I've ever been a part of.

Let's talk about the record. It's loosely based on Fred's hometown. Can you explain

F: There were 49 arson fires in my hometown in a short period during 08-09. It was scary, frustrating, and sad and it seemed like it would never stop. I wrote a few songs dealing with it and we continued to use it as the background for the stories in the rest of songs. It gave us something to sink our teeth into and not just write about the same old boy/girl relationships.

J: Andy actually had a house fire a few years ago where he lost everything, so he helped to bring in that point of view with the writing.

F: Yeah, it was totally a group effort in the writing even though it was my town we based it on.

The album's not simply about the fires though, I mean the lyrics latch onto other social issues, no?

F: Revolution is sort of the anthem for the town on the album but it's meant to relate to anyone. The lyrics are "This is not a revolution, Until we say it is". It's all about the things we all see in the world that we'd like to change and how they won't change unless we make it happen.

It's not about a particular issue but I happen to love the outdoors and nature so I do different things to curb my part of global warming like I have an '82 VW Rabbit that runs on vegetable oil. Whether it's a subject we agree with or not doesn't matter, the song is just saying, turn off the TV and computer once in a while and go out and live it.

Why'd you choose Birmingham, Alabama to record? Seems a bit odd given your rock histories...

F: Most of the recording experiences I've had up North have used replaced drum sounds and lots of auto-tune and we thought this band was good enough to escape that. We chose to work with Jason Elgin because he had an old school, rock history. It was also great to be far enough from home that we couldn't run back and forth. We could stay super focused on the album.

J: The studio really became a second home for me. Fred actually has a key to the place and so we'll still stay there when we're going through on tour. I really miss Jason right now!

Lastly, is Terrible Things a one time thing or are you guys in it for the long haul?

J: I really hope this is the band we're still doing 10, 15 years from now. These guys are all great players and singers. We put on a really great live show. I don't expect to find anything else I'd rather to do.

F: Josh, you're stuck with me for a long time.