This post was co-authored by Lisa Bohmer and Noreen Huni, Chair and Co-Chair of the Coalition for Children Affected by AIDS

Allow me to introduce you to a young, HIV positive mother--we'll call her "Sarah"--in South Africa. Sarah is living in extreme poverty. To ensure her child has food and shelter, she is a sex worker, likely how she contracted the disease. Forced with the untenable choice of providing either food or childcare--she cannot afford both--she locks her baby in the house while she works. She is consumed with thoughts of how often the baby cries, and worries what will happen if her home catches fire or someone breaks in while she is gone.

Sarah is not alone. And her baby is far from the only child that is suffering.

Today, on World AIDS Day, we can't forget that this experience is the reality for many of those whom the global health community has determined to be most vulnerable to HIV and AIDS-not only sex workers like Sarah, but also people who use drugs, transgender people, and men who have sex with men. While the global health community has worked for many years to determine the best way to fight HIV and AIDS among key affected populations, we know very little at all about their children.

Mothers and fathers from within the key population community are reluctant to formally register their children for fear of having them forcibly removed by the authorities, many of which regard key populations as unfit parents. As a result, their children remain largely hidden. To address this, over the past two years, the Coalition for Children Affected by AIDS, together with 10 other partner organisations, conducted the first global analysis of children of key populations affected by HIV and AIDS. The findings were deeply concerning. 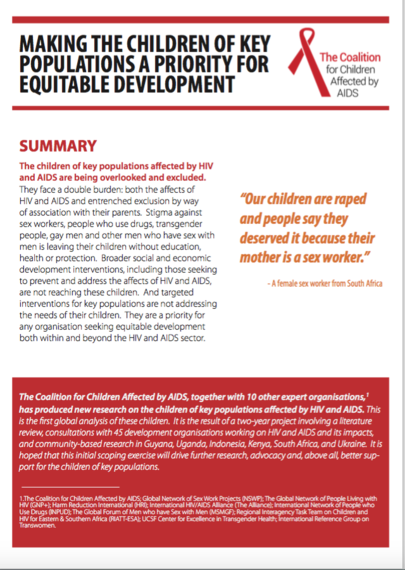 Children of key populations face a double burden: both the affects of HIV and AIDS and entrenched exclusion by way of association with their parents. Stigma against their parents results in children going without education, health, or protection. Parents report feeling less able to take their child for medical care, fearing public shaming and abuse from health staff and other patients. Key population families regularly have to move to avoid stigma, causing major disruption to, and even abandonment of, their children's education. Cases of neglect or violence against the children of key populations are taken less seriously by the police and often go unpunished. All of this creates long-term consequences on children's psychological wellbeing and on their opportunities in adult life.

Because they are largely absent in the research, assessments, and monitoring that underpin development planning, government and nongovernmental organizations rarely target or resource interventions for these children. They also face entrenched structural exclusion from services and supports. For example, the criminalisation of key populations means that parents cannot apply for state social assistance for their children for fear of legal recrimination. Laws and policies promoting the automatic forced placement of children from the parents of key populations into alternative care also keeps family strengthening services out of reach.

The end result is that children of key affected populations are being overlooked and excluded. And this is entirely unacceptable. Furthermore, it is a major barrier to effective programming for key population parents, many of whom would be far more likely to participate in HIV interventions if the needs of their children were met first.

Supporting these children requires a holistic, family-centred approach involving stakeholders from across a range of development sectors working together. Organisations working on core development issues such as health, education, and social and child protection need to better target the children of key populations. And organisations within the HIV and AIDS sector need to prioritise more resources for this demographic.

Across all sectors, interventions must strengthen the capacity of parents and carers from key populations to provide and care for their own children. This includes:

Achieving the aspirations of equitable development set out in the Sustainable Development Goals requires further research, advocacy and, above all, better support for children of key populations. Compassion and human decency requires us to ensure that this population has an improved chance at a healthy, productive life.

Further information can be found here.