Three years ago, on the eve of unveiling his storytelling and photo-sharing platform, Cowbird, Jonathan Harris called his investors and gave back their $500K investment. Rather than caving into pressure to maximize profitability at the expense of the user experience, Harris stuck to his vision. He launched Cowbird his way: ad-free and passionately committed to genuine interplay among users. Today, it's a thriving community of nearly 70,000 stories and storytellers from 180+ countries who prefer to post stories in formats longer than a Facebook status updates, but briefer than short stories. 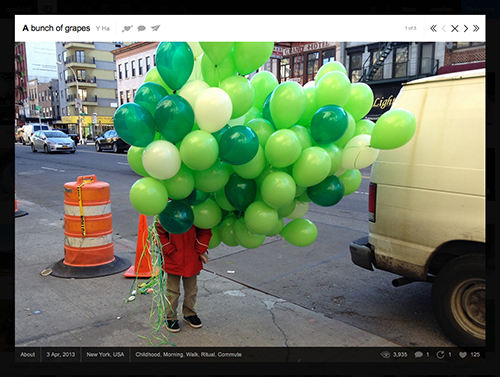 This week, Harris rolls out a new and improved Cowbird, with social features that heighten creativity and serendipity among users. User "citizens" can pay a modest membership fee to help fund the site. With this latest version of Cowbird, Harris has refined some of the interface and usability features to make it more like a small town where it's easy to bump into people and get to know them. The search function helps people find authors by roles they play: gardener, business owner, encourager and so on. Finding and sharing stories around life events, troubles, triumphs and concerns is effortless. At most social media platforms it's difficult, if not impossible, to connect with or share with people you haven't already invited into your circle -- it's an echo chamber. But Cowbird encourages chance encounters by referring similar material the same way Amazon does. Popular story lines are extended by daily "seed" story prompts.

While Cowbird is packed with ad-free story telling tools, its hidden asset lies in delivering what many online users secretly crave: a cohesive sense of identity. Most of us have a plethora of identities that we use for various social apps. Not a big deal, right? Until you consider that as we trade more time online for less time out in the world, increasingly the digital realm is where we become who we are. In previous generations, identity was formed through socializing in Cub Scouts and Girl Scouts, or the Moose Lodge or the PTA -- today we cultivate our sense of identity over on Pinterest and Twitter. But these social media sites are insufficient for anyone seeking deeper meaning.

So far, Harris has been able to achieve something remarkable. With very little capital he's tackling the hard, humbling work of engaging people and connecting them to each other based on shared experiences. No matter how overblown the web might seem today, there's still white space. There's still opportunity to capture the attention of millions of people burned out and uninspired by the emptiness of hours spent online using popular social media. It's a triumph of imagination over cynicism about what people want online. And the good vibes radiating out of Cowbird's community are proof that when it comes to knowing ourselves, nothing replaces meaningful human relationships.

Patricia Martin is founder of Chicago-based LitLamp Communications, and author of the forthcoming book on identity in the digital culture.