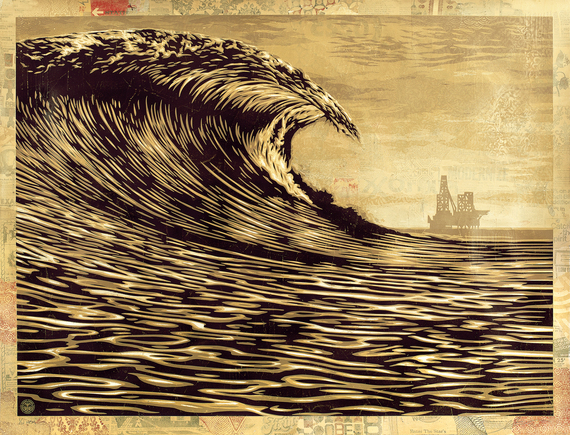 Shepard Fairey is an acclaimed American contemporary street artist, graphic designer, activist, and illustrator, who, while attending the Rhode Island School of Design, began appropriating images from supermarket tabloids and other printed materials, which eventually became a central resource for his iconic style. Fairey was commissioned twice by Time magazine to illustrate the cover for Person of the Year, and Peter Schjeldahl, art critic for The New Yorker, called his "HOPE" poster for Barack Obama's 2008 candidacy for president "The most efficacious American political illustration since 'Uncle Sam Wants You.'"

The success and perpetual energy of Silicon Valley might seem like it happened overnight, but in fact the gestation period of this remarkable high-tech landscape was little more than a twinkle in the eye of Frederick Terman, Stanford's dean of engineering and provost during the 1940s and 1950s, when he had an historic vision to encourage his faculty and graduates to start their own companies, which grew up around the Stanford campus providing a natural motivational magnet attracting Hewlett-Packard and numerous other like-minded young firms and entrepreneurial individuals with a vision for the future that lead to the rapidly rising tide of the microcomputer revolution. At the same time on the opposite coast of America, the nucleus of the contemporary art world had been re-positioned from Paris and Berlin to the cast iron caverns of downtown Manhattan, the better to explore the completely different free-thinking and often controversial mindset of its artists. In this post-World War II era, abstract expressionism, a truly unique and inventive style of painting, was making waves as a bedrock of creativity uniquely and idiosyncratically stamped "Made in America," and also became known as the New York School. Like the young visionaries of Silicon Valley, who gained strength and recognition in risk-taking experiments and with like-minded aspirations, inquisitive pioneers in art built a permanent beachhead that changed the way we perceived art forever, and created a new, powerful industry for revolutionary breakthroughs in contemporary art.

Robert Rauschenberg, who is represented in the fair, was a strong proponent of exploring art and technology through his celebrated E.A.T. experiments (Experiments in Art and Technology) of the late 1960s, which promoted collaborations between artists, engineers and scientists. Those innovators would be pleased today to discover a similar marriage of both interests within the walls of the San Mateo County Event Center, as the second annual Art Silicon Valley/San Francisco (Art SV/SF) returns to the Bay Area on Columbus Day weekend October 8-11, opening with a Platinum VIP Preview on October 8th sponsored by Ruinart Champagne and benefiting ScholarMatch. This important four day event will showcase works by 20th and 21st century artists offered by a distinguished group of international galleries from around the world, including London, Tokyo, Amsterdam, Paris, Jerusalem and Bogota. The fair directors have invited Christine Duval to curate a special thematic exhibit titled "Code and Noise" that introduces eleven media artists from the US, China and Japan who use, create or leverage software to create their art with a focus on world issues, such as data collection, the environment and surveillance. In addition to an impressive range of contemporary and modern art and design, curated exhibitions, artists' talks, book signings, and fair tours, there are projects showcasing the latest works in technology and art, and new media and educational programs and lectures designed to cultivate new and established collectors. "Art Silicon Valley/San Francisco is a cultural destination event that gives visitors a variety of unique, inspiring and high-quality artwork that are truly unparalleled on the West Coast," said Nick Korniloff, director, founder and partner with Art Miami LLC. "As the epicenter of 21st century innovation, this region is a natural place to bring sophisticated buyers together with world-renowned international galleries to showcase works in traditional and new media. In addition, the educational programs we offer will provide invaluable perspectives on art for new collectors and inform connoisseurs."

Art Miami, the distinguished powerhouse of American art fairs with twenty-six years in the business, will take an exciting, expansive step forward with additional galleries and informative programs for Art Silicon Valley/San Francisco after its highly successful inaugural fair in 2014. This much anticipated art fair, now an annual event for the surrounding community, has an impressive line-up for the 2015 edition. The following "top picks" are among my favorites for this year's fair and should indicate an advanced perspective on the overall quality available in the impressive line-up of dealers and the artists that they represent. 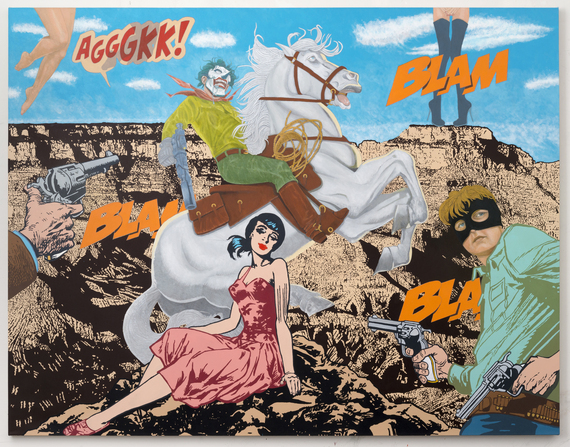 Kearns' acrylic composition depicts what could be considered a cinematic jump-cut of disparate cowboy and western subjects who ride white horses, point revolvers and rescue damsels in distress. The background image might have been appropriated from an outpost on the Grand Canyon, but the banners are unabashedly Lichtenstein with a little Warhol thrown in for good measure. The artist's "psychological pop" paintings portray a multi-dimensional quantum universe. These works are packed with contradictions and intrigue, vintage cinema and comic books, and playful circumstances, and often are tied together in a single anxious moment. (Modernism, San Francisco: www.modernisminc.com) 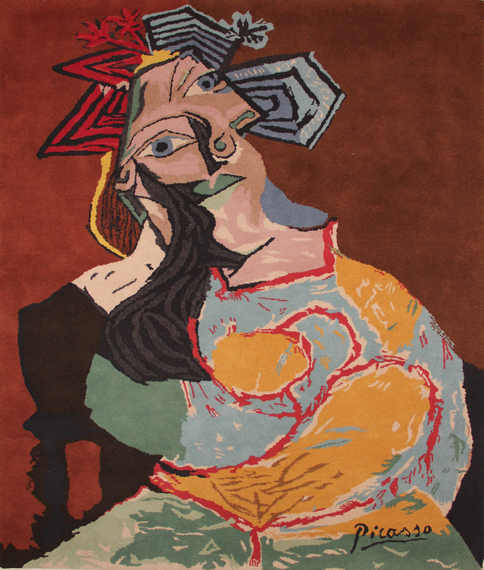 Picasso is celebrated as one of the most influential artists of the 20th century. He is known for co-founding the Cubist movement and the invention of collage and of constructed sculpture, which is the focus of a current survey of his three-dimensional works at the Museum of Modern Art. Picasso demonstrated extraordinary artistic talent in his early years, painting in a naturalistic manner through his childhood, but during the first decade of the 20th century his style changed as he experimented with different theories, techniques and ideas. Later in his career he produced superb prints, ceramics, and stage designs, and eventually, like many great artists, had his images transferred painstakingly by hand into extraordinary tapestries as pictured above. (Jane Kahan Gallery, New York: www.janekahan.com) 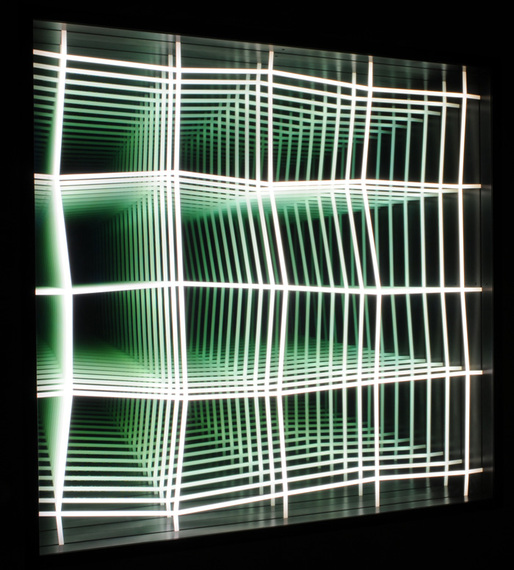 The art world term for vanishing point takes on a whole new meaning with the illusionist "configurations" of Chul Hyun Ahn, who generates amazing and often unthinkable investigations into infinite space. These contemplative works utilize light, color, and illusion as physical manifestations, which explore infinity and the poetics of emptiness. The artist has developed a new twist into the practice of meditation by combining the art of illumination, space and technology. Dan Flavin may have been the first to use light as an extension of his contemporary explorations, but Ahn has taken an unpredictable spiritual leap into mystically creating space. (C. Grimaldis Gallery, Baltimore: www.cgrimaldisgallery.com) 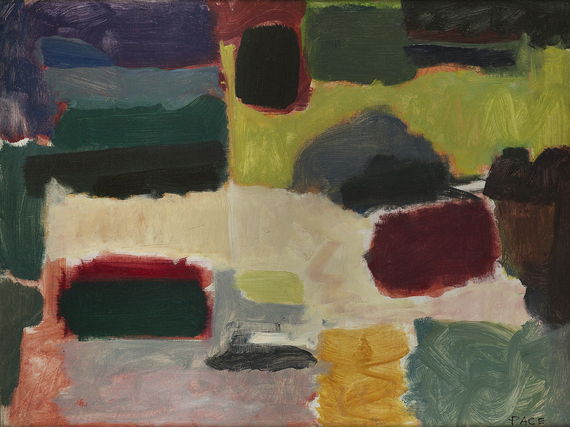 Stephen Pace began studying art at an early age, and after World War II he met Gertrude Stein and Pablo Picasso in Paris, who encouraged him to continue as an artist. He then went to Mexico, where he met Milton Avery, who convinced him to continue his education at the Art Students League. Soon he became recognized as a gifted painter and in 1950, The New York Times described his work as "dark, energetically worked abstractions achieved through a distinctive blend of brushwork, drawing and staining." The work shown here is a masterful example of brilliant painterly abstraction. (Berry Campbell, New York: www.berrycampbell.com) 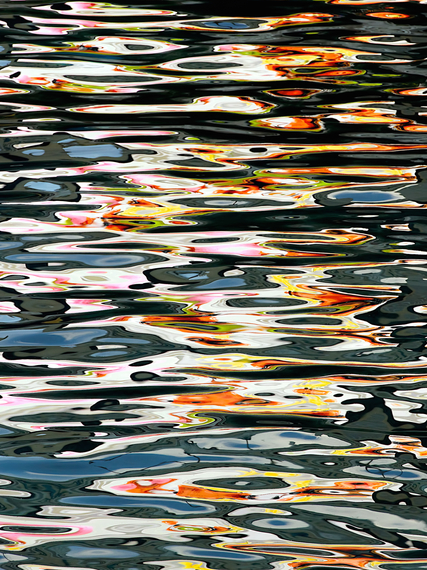 Barbara Vaughn combines her love of water and an appetite for abstraction and distills an inventive formula that "springs from an unexpected confluence of nature and the man-made world...." For this artist, inspiration comes from the magic of harnessing water's inherent ability to mirror and transform the appearance of objects in and around it. Vaughn captures the reflective visual chemistry of the sun, sky and wind through a cameras lens at just the right decisive moment, which results in amazing abstract compositions whose original sources are barely recognizable, but memorably beautiful in their simplicity and ingenuity. (Dolby Chadwick Gallery, San Francisco: www.dolbychadwickgallery.com)

At an early age Arnoldi viewed works by Pollock and de Kooning, and after observing their deliberate smudges, smears and imperfections, he recognized that he was capable of such work and ended up at the Chouinard Art Institute in Los Angeles. The artist has developed a distinctive sense for placing handsome circular shapes within squares like a crossword puzzle, which makes perfect logic from any viewpoint. (Caldwell Snyder, San Francisco: www.caldwellsnyder.com)

Banksy is a pseudonymous British graffiti artist, political activist, and painter. His satirical street art and subversive epigrams combine dark humor based on a street art aesthetic with a distinctive stenciling technique. His claim to fame was initiated years ago with his famous Kissing Coppers, a painting of two uniformed bobbies smooching on an urban wall that turned heads and elicited smiles. Banksy's work remains idiosyncratically distinctive and continues to influence countless other street artists. (SmithDavidson Gallery, Amsterdam: www.smith-davidson.com)