One of the things I love about blogging for The Huffington Post is that it gives me the opportunity to interview smart people with good ideas who have the experience to back up those ideas. Last week I talked with an especially interesting expert, Mal Warwick, who has written a powerful book on a vitally important topic -- The Business Solution to Poverty.

I was so happy to learn of your new book, Mal, because it seems to me that Americans too often look to government to solve social and economic problems while completely ignoring the possibility that private enterprise might have some good solutions. Tell me a bit about how you and your coauthor, Paul Polak, came to write The Business Solution to Poverty.

Thank you, BJ. It's great to have this opportunity. To answer your question most directly, I have to point to Paul's and my experiences beginning far in the past. In my case, it was service as a Peace Corps Volunteer in Ecuador in the 1960s that first exposed me face-to-face to the challenge of global poverty -- and motivated me to seek professional opportunities that might help ameliorate the tragic conditions I witnessed. Paul's personal experience in learning about the extreme poverty so common in emerging nations started around 1980 when he began traveling to such countries as Bangladesh and Ethiopia and spending hours in conversation with farmers living on $1 a day or less. However, in the more immediate sense, our collaboration came about through the good offices of our publisher, Steve Piersanti; each of us had written one previous book with him. Knowing of our overlapping interests and thinking we might hit it off, Steve brought us together.

What is the thesis of your book, in 25 words or less?

Ha ha! BJ, I've never managed to say anything meaningful in 25 words or less! But here goes the elevator speech: After more than 60 years of effort and $2.5 trillion in investment by the rich nations of the world, some 2.7 billion people -- about two out of every five people on the planet--still live on $2 a day or less. But this failure of traditional methods to end poverty represents an opportunity: an opportunity for entrepreneurs, investors, and existing businesses to open new markets, gain new customers, and make big profits -- and, simultaneously, an opportunity to transform the lives of those 2.7 billion people and bring them fully into the 21st-Century market economy by creating jobs and putting more money into their pockets. 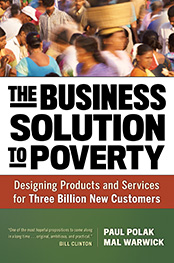 The great mythologist Joseph Campbell pointed out that you can determine the dominant social institution in any society by the height of its buildings. Many years ago, churches and cathedrals were the tallest buildings in cities and small towns alike. As time went by, government buildings grew to dominate our skylines. Today, it is unquestionably the corporations, banks, and other financial institutions that tower over us. What do you see as the pluses and minuses of having business as the main driver of social and political values? How has our country -- and the world -- benefitted? What has it cost us?

Don't get me started, BJ! I lament the damage to our democracy and our society that corporate domination has brought about in the US: crushing inequality in income and wealth; the preeminence of money in the political process, and the corruption of elected officials whose views have been shaped or altered by the relentless search for campaign funding; the defunding of essential safety-net services that now provide progressively less protection from destitution for children and old folks; the failure to put in place such cost-effective human service programs as universal health care and free universal pre-school education that have long since been in place in other industrialized countries; not to mention the enormous and often entirely unnecessary squandering of precious natural resources and the degradation of the environment. All these sad consequences circumscribe the lives of the 1 percent just as they limit the potential for self-fulfillment of the rest of us.

With all this said, however, I recognize that the private sector has brought huge benefits to many of us throughout the rich nations of the Global North -- a standard of living for half or two-thirds of the population that was simply unthinkable a century ago. And I don't blame the bright and talented people who manage most of today's corporations for all these negative impacts on society. The responsible culprits are a greedy minority among the corporate elite, together with the leadership of Wall Street and their willing collaborators in government.

Since the GOP is generally considered the more business-friendly of our two main political parties, how ready do you think they are to tackle the issue of poverty?

I suspect that the overwhelming majority of rank-and-file Republicans would be enthusiastic about the business-centered approach to poverty that Paul and I propose. However, the ideological knee-jerkers and nutcases who purport to represent them in Congress have not only demonstrated their unwillingness to tackle the issue of poverty but have made clear that they're determined to make poor people in America even poorer. There is no other conclusion to draw from House Republicans' vote to cut food stamp funding in half. Fortunately, The Business Solution to Poverty is not about public policy; it's about a new approach by the business community to the grinding poverty in developing countries and has nothing to do with politics.

How do you think the Democrats will respond to the ideas and suggestions in your book?

Among those Democrats whose concern for people extends to the billions of poor people in developing countries, The Business Solution to Poverty has begun to encounter an enthusiastic reception. For example, Bill Clinton calls the book "one of the most hopeful propositions to come along in a long time ... original, ambitious, and practical." And Congresswoman Barbara Lee calls it "a promising alternative approach to this age-old challenge."

As a fellow author who is also interested in social change, I'm curious about how you go about getting your book into the hands of people who are in the best position to take action based on your book?

I don't think Paul and I are doing anything much different from what you and other authors typically do to market your books, which I imagine is practically everything you can possibly think of. We're speaking wherever enough people will get an audience together, including such places as the World Bank, the Bill and Melinda Gates Foundation, and conferences of social investors and social entrepreneurs. We're doing readings at bookstores. We're doing lots of radio interviews. We're reaching out through social media, our blogs, and email. And we're devoting special attention to university campuses, because we believe that, other than investors, entrepreneurs, and business executives, the people we most want to read The Business Solution to Poverty are business students.

For more on "The Business Solution to Poverty" visit www.paulpolak.com