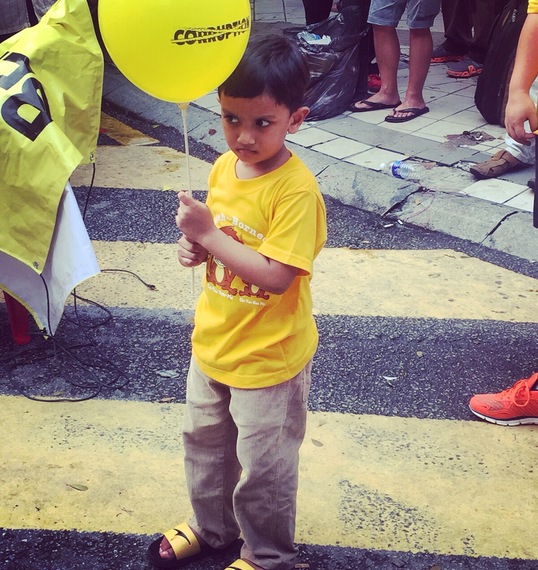 A young boy at the Bersih protest in Kuala Lumpur's Independence Square holds a balloon against corruption. (Ghazala Irshad/GroundTruth)

PUTRAJAYA, Malaysia -- The irony that leaders of the country hosting an international gathering against corruption are themselves embroiled in an embezzlement scandal provided unprecedented drama for 30 million Malaysians and a rare live case study for more than 1,000 anti-corruption conference delegates who visited Malaysia last week from around the world.

Leaked documents implicating Prime Minister Najib Razak in the embezzlement of $700 million from a state development fund prompted protesters nationwide to don yellow and call for his resignation, ahead of the 16th International Anti-Corruption Conference (IACC) last week.

The scandal was the proverbial elephant in the room on the opening day of the IACC hosted by Malaysia on September 2. Then Jose Ugaz, president of global corruption watchdog group Transparency International, boldly addressed it head-on.

In a fiery speech introducing the new keynote speaker, the Malaysian minister of governance and integrity -- who replaced Razak at the last minute -- Ugaz clearly outlined all of Razak's ethical violations and demanded specific answers from an independent probe.

"There are unanswered questions about the $700 million that made its way into the Prime Minister's personal bank account," Ugaz said, as the conference hall thundered with applause and cheers.

"In recent weeks we have seen the attorney general who was critical of the government suddenly replaced, the [state development fund] task force suspended, investigators at the Anti-Corruption Commission arrested or transferred, and newspapers suspended for reporting on the matter," Ugaz continued.

"These are not the actions of a government that is fighting corruption. Malaysia is facing a corruption crisis."

Ugaz was a hard act to follow for Datuk Paul Low, the minister who spoke in place of the prime minister. Low is also the former president of Transparency International's Malaysia chapter. Low was visibly humbled as he took the podium from Ugaz, and his remarks were a stark contrast.

"I welcome you all to this conference, and I hope you all will welcome me," Low began nervously. "The prime minister did not write my speech for me. I am not here to defend the prime minister, or justify the government's actions."

Minister Low sought to detract from the scandal by downplaying corruption and puzzlingly, denying the economic woes at the root of the public's grievances.

"There are no poor people in Malaysia and unemployment is less than 3 percent. The World Bank ranks Malaysia sixth for ease of doing business," Low said.

"That's not the sign of a country in economic trouble. Yes, corruption is an issue, but it doesn't affect Malaysia's competitiveness."

Malaysia has been heavily focused on achieving "developed nation" status economically, but without factoring in government transparency or human rights like freedom of speech.

Accusations of gerrymandering, voter fraud, and misappropriation have long plagued the prime minister's office, but in July, Razak himself was directly implicated in corruption when a Wall Street Journal investigation in July revealed that $700 million were funneled into his personal bank accounts from the 1Malaysia Development Berhand (1MDB) fund ahead of a general election in 2013.

Razak has served as chairman of 1MDB's advisory board since he established it in 2009 to revitalize Malaysia's economy, only to have overseen the fund accumulate $11 billion in debt.

Razak initially fully refuted the Journal's report and threatened to sue the newspaper for libel, but has since admitted to the transfers, calling them "political donations" from unnamed donors from the United Arab Emirates. The Journal released flowcharts and bank documents showing how the funds were funneled to Razak's account and were used to help his 2013 campaign.

In yet another irony in an earlier session at the conference, Minister Low chided the whistleblower for leaking documents to the press instead of going to the authorities or confronting Razak so that he could have a chance to defend himself.

"You must whistleblow to the appropriate authority [within the government]. Because once you leak, the accused can't defend themselves," Low said. "Integrity is not just about fighting bribery, but also making sure you don't accuse anybody unnecessarily."

Razak is now being investigated by the Malaysian Anti-Corruption Commission (MACC), although the probe appears to have been compromised and stalled since he fired or reassigned several of the investigators, along with any dissenting voices in his cabinet.

Amid the scandal, the Malaysian ringgit's value declined sharply, exacerbating the public's frustration over the country's stagnant economy, and emboldening an electoral reform movement led by The Coalition for Clean and Fair Elections called Bersih, meaning "clean" in Malay.

Two days before Malaysia was set to mark its 58th year of independence, or "Merdeka" in Malay, tens of thousands of protesters flooded the streets across the country wearing yellow shirts, despite a government order declaring that besides the protest itself, the color yellow and the word Bersih were also illegal.

While some wore Guy Fawkes masks symbolizing anarchy and brought saline in anticipation of teargas, all wore yellow shirts stating explicit demands: clean elections, a transparent government, a stronger economy, the right to protest and the prime minister's resignation.

"I'm an average citizen who wants to improve my financial situation with time just like our government wants for itself," said 52 year-old Terence, a property developer who said he has not seen his salary change in 15 years, while the cost of living has gone up to the point that he has had to take an extra job. "I work so hard, but I have no savings."

The two-day protest remained surprisingly peaceful, considering the police brutality, arrests, and repression characteristic of previous Bersih protests in 2011 and 2012 and threats of a crackdown ahead of last weekend.

Police have brought in several Bersih activists for questioning this week.

At the anti-corruption conference, Minister Low praised the police for protecting demonstrators at the Bersih protests despite the government orders deeming them illegal because their purpose was not acceptable.

"Our government gives you the freedom to protest, but what is the purpose? If you're against corruption or injustice, no problem. But you cannot call for the PM to resign mid-term," said Low, who introduced himself at the conference as an "apolitical anti-corruption activist."

"So, it [Bersih] is not just a rally against corruption, but a mini-Arab Spring," Low went on. "So of course the government cannot allow this."

It's unlikely the nascent protest movement in Malaysia will overthrow the government anytime soon.

"I know change won't come overnight, so this rally was more about demonstrating Malaysian unity in the fight for justice," said 28 year-old Syawzina, a graduate student of science. "It's going to be a long road and the protest movement will need to stick together, because the political opposition is too divided."

But Minister Low has a different suggestion for protesters. "If you don't like the government, you have the right to express this at the ballot box with your vote at the next election."

Therein lies the problem, says the Bersih coalition, which was formed three years before Razak assumed office. The group's full name in Malay translates to "The Coalition for Clean and Fair Elections," and its main demand has always been for electoral reform.

Last year, a Harvard University and University of Sydney study called The Electorial Integrity Project ranked Malaysia as 114th for election fairness and said that it had the worst electoral laws and district boundaries of 127 countries surveyed. Bersih says this gerrymandering has given an unfair advantage to the ruling UMNO party since 1957.

Jose Ugaz, president of Transparency International, ended his speech at the conference with both a general warning to the corrupt, and a direct reference to the Bersih protests against Prime Minister Razak: "Hundreds of thousands of people are sending a message to the corrupt: Your days of impunity are numbered."

This story is presented by The GroundTruth Project.