KUALA LUMPUR, Malaysia (RNS) Syed Azmi Alhabshi has been labeled a heretic, a closet Christian, a Zionist spy or even a Shiite Muslim. His crime? Inviting other Muslims to touch a dog.

The subsequent death threats and online abuse sent him into hiding, fearing for his life. So when he met reporters here on Saturday (Oct. 25), the 37-year-old social activist spoke from a prepared text, took no questions and left after five minutes.

Nearly 1,000 people attended the Oct. 19 event at a park in the western state of Selangor, aimed at helping Muslims overcome religious stigma and fear of canines, learn permissible ways to touch a dog and how to perform a cleansing ritual, known as “sertu” or “samak.”

The backlash was swift and serious after social media and news reports were flooded with images of Muslim participants — particularly women in hijabs — stroking and hugging their new four-legged friends at the “I Want to Touch a Dog” event.

Muslims here largely subscribe to the Shafi’i school of jurisprudence, which views dogs as unclean. Dogs are not permitted to be reared as pets or handled, cuddled, pet or kissed. The only reason to touch a dog is if it needs help.

Following the uproar, the federal government here issued a religious edict that deemed the touching of dogs went against mainstream Islamic doctrine.

In recent days, an increasing number of moderate Malaysians have gone online to push back against the hate speech and the un-Islamic threats and actions directed at Syed Azmi and the event’s other organizers.

Syed Azmi has long been known for his string of community-based projects. His friend, Aminuddin Ab Kadir, cited his charitable efforts in urging the public to consider Syed Azmi’s “track record” before judging him.
“I wanted to reveal our pattern of thinking in which we all love sensational issues (more so those with religious elements to them) as opposed to community issues which are more isolated and less glamorous,” Aminuddin wrote on Syed Azmi’s Facebook page.

Others defended the event, saying that it benefited Muslims and non-Muslims in understanding the boundaries when it came to handling dogs in Islam. One online group, “Malaysians for Malaysia,” started a campaign to raise support for the initiative.

“Last weekend, Syed Azmi brought hundreds of Malaysians together to help address animal cruelty and overcome prejudice and fear towards dogs. Now, he is under attack by those who seek to perpetuate ignorance and irrationality. Let him know that Malaysians stand by him in support of this wonderful initiative. Stand up and speak out,” read the post, which has since garnered more than 2,400 shares.

The controversy, which has largely played out online, also prompted questions around a lack of freedom accorded to the country’s majority-Muslim population to explore other Islamic schools of thought. In Malaysia, all Malays are Muslim by law.

On Monday, Zaid Ibrahim, a prominent blogger and former cabinet minister, warned that as a result of this dog-petting edict, “Malays are now in danger of being classified as ‘deviant’ if they have slightly more liberal or progressive views about life and the world than those who call themselves ‘ulama'” (or the Muslim scholars).

On Facebook, the local Muslim women’s rights group Sisters in Islam described Islam as a beautiful religion, stating that “touching a dog is not haram (prohibited). The dog is a creature of Allah. Quick condemnation of views with which we disagree is a sign of a narrow mind, of an uncultivated intelligence.”

The group also took its message to Twitter where, in one of many tweets using the hashtag #IWantToTouchADog, it criticized the government’s emphasis on the Shafi’i Islamic code on handling dogs, ”because (issuing) an edict on touching dogs is more important than an edict on joining ISIS’ jihad.”

(While the Shafi’i school takes a traditional position against dogs, others, including the Maliki school, are more lenient.)

On Facebook, cafe operator Zurinna Raja Adam stated that the Quran does not mention that dogs are unclean, but rather that it is subject to differing interpretation of Islamic scholars.

“But for years it has been hammered in us that is it prohibited (to touch dogs). But that’s the thing about religion, it is a never-ending learning process,” she said in an interview, calling the event one of the most “profound” experiences of her life. 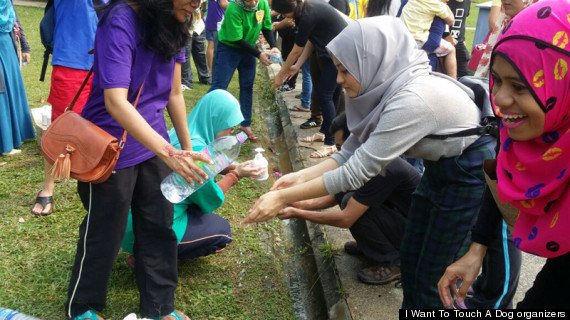 And while not everyone agreed with Syed Azmi’s event, some used social media as an opportunity to explain their point of view. Carl Shahrul posted on Facebook: “Animal cruelty has never been an issue to Muslims. We condemn cruelty to dogs and pigs the same way we condemn cruelty to cats or other God-created creatures … I feel ashamed that many Muslims have to go to that extent (of touching and hugging dogs for fun) just to show that our religion treats dogs equally.”

Maszlee Malik, a respected lecturer at International Islamic University Malaysia, said the event reflected the sentiments of young urban Muslims “who would love to see a more inclusive and harmonious Islam that doesn’t compromise the fundamentals of the religion.”

The resulting fuss wasn’t really about Islamic doctrine, he said.

“Having such a big event was perceived by them as a challenge of the status quo and a form of disrespect to the inherited norms of the majority,” he said.

But Mohd Asri Zainul Abidin, former mufti for the northern state of Perlis, said the dog-touching event was too much too soon — especially in a Muslim-majority country that likes to see itself as both traditional and modern. Although Syed Azmi’s intentions may have been good, the activist underestimated the Malay reaction.

“The best thing is to educate people by having a seminar, inviting scholars … because when all of a sudden you ask people to do something they have never done in their life, it will be quite strange for them,” he said. “There should be stages.”

During his brief appearance at Saturday’s press conference, Syed Azmi said the entire episode was a “learning process” and apologized to those who were offended. He stressed that it was never his intention to “distort the faith, alter the laws of the religion, insult the ulamas or encourage liberalism.”

“It was an educational program on respecting Allah’s creature that was being looked upon unfavorably and being abused by our community,” he said, adding: “The program never encouraged dogs as pets.”

Meanwhile, his attorney, Syahredzan Johan, said a police report has been filed on the death threats.

“This is the new age where if you don’t agree with something, you can criticize,” he said. “This is democracy. In fact there is nothing in Islam that says you cannot criticize something.”