Once you've seen a world-class news photograph, it's impossible to get that image out of your mind. If television brought the Vietnam War into your living room, it was the still photo that transported it directly to your heart.

Associated Press reporter Malcolm Browne took one of the greatest photographs from the Vietnam War. He wasn't a professional photographer, but that's irrelevant. The image, a searing portrait of a Buddhist monk who set himself on fire on a Saigon street as a protest against the government, will always be regarded as one of the most essential and vivid landmarks along the torturous path of modern Vietnamese history.

That photograph had an enormous impact on President John F. Kennedy, and triggered a series of events that ultimately led to the overthrow and murder of South Vietnamese President Ngo Diem. The power of a picture should never be underestimated.

Malcolm Browne died two days ago. He won the 1964 Pulitzer Prize, not for that photo, but for his reporting of the Vietnam War, an honor he shared with David Halberstam of the New York Times. His picture of the burning monk did win the World Press Photo contest, but ironically the Pulitzer for photography that year was awarded to Robert Jackson of the Dallas Times-Herald for his photograph of Jack Ruby shooting Lee Harvey Oswald, President Kennedy's assassin.

Another photograph that impacted the course of history was AP photographer Eddie Adams' image from Saigon in 1968 of Saigon police chief General Nguyen Ngoc Loan shooting a Viet Cong suspect point blank in the head. The picture was awarded a Pulitzer.

That photo sharply defined what a major segment of the U.S. population thought the war had become -- a futile effort. It became a visual punctuation mark for the anti-war movement. For many Americans, Eddie's photo was a turning point in the Vietnam War, and was partially responsible for the U.S. retreat. I think that may be overstating the case, but it was an important element that contributed to public antipathy in the U.S.

Pictures also take a toll on the takers. Eddie was plagued by how his photograph was characterized. He was particularly upset about the negative impact it had on General Loan's life, and, told Time Magazine, "The general killed the Viet Cong; I killed the general with my camera. Still photographs are the most powerful weapons in the world. People believe them; but photographs do lie, even without manipulation. They are only half-truths..."

Eddie's photograph perfectly illustrates the shock and brutality of war. It has been used in thousands of different ways, from a wall-size decoration in the living room of an upscale house, to the backdrop of a Broadway play. It has become the Art of War. Eddie is gone, but that photo will be with us forever.

Another high-impact Vietnam War photo is Nick Ut's image of little Kim Phuc running down the road naked after being hit with napalm in 1972. It won the Pulitzer Prize the following year. It is fitting that a Pulitzer was given to a Vietnamese photographer, and to one whose own brother was killed in action while taking photos. Nick is also lucky to be alive -- he was wounded three times in combat as he pursued his pictures.

Scores of great photographs were made during the Vietnam War, and many photographers died taking them, but in my view Nick, Eddie and Malcolm hold the first three places in the temple of the perfect photo. Nothing really comes close to the drama, the horror and downright importance of those images.

Ten Pulitzer Prizes were awarded to journalists and photographers who covered the Vietnam War. Out of those ten, four went to correspondents: Browne, Halberstam, Peter Arnett and Bill Tuohy. Six were given to photographers Horst Faas, Adams, Ut, Kyochi Sawada, Toshio Sakai and myself.

When a friend and colleague dies, particularly one whom we worked with in Vietnam, our diminishing network comes together. I spoke to Nick Ut on the phone yesterday, and after a few minutes of discussing Malcolm Browne and the importance of his photograph, Nick said, "Dave, you and I are the only ones left who won Pulitzers for our pictures in Vietnam. How you feeling?"

Except where noted, all photos were taken by David Hume Kennerly.

On the Death Of Malcolm Browne (PHOTOS)
Vietnam War Photos 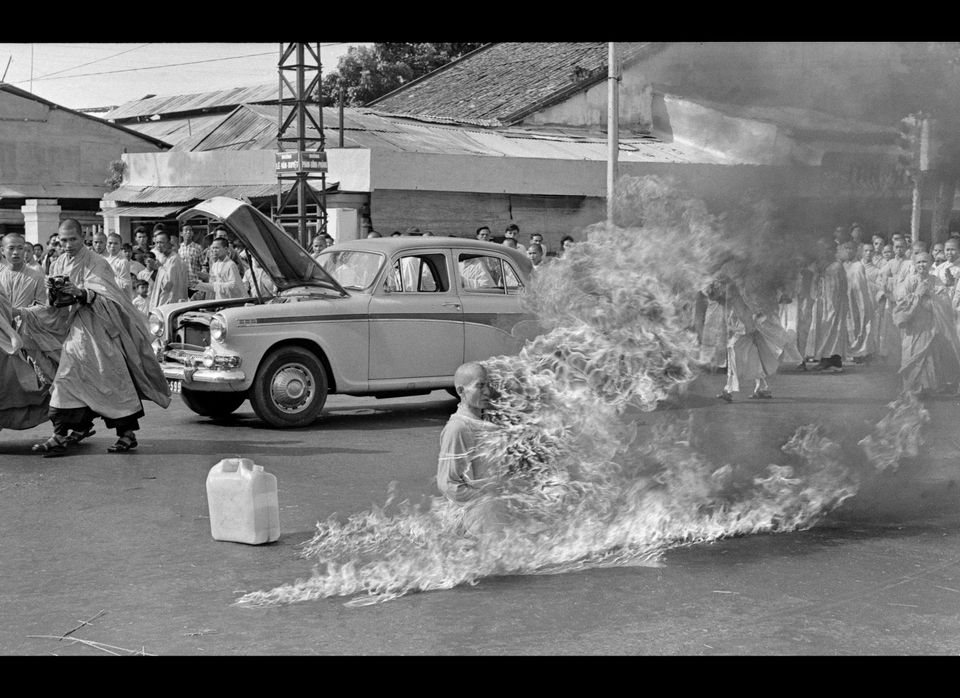 1 / 21
Taken on June 11, 1963 by then AP Saigon correspondent Malcolm Browne, a Buddhist monk, burns himself to death on a Saigon street to protest alleged persecution of Buddhists by the South Vietnamese government.
AP