Tom Brady may have secured the title of MVP at the Super Bowl, but the Patriots' star quarterback says it’s Malcolm Butler, a 24-year-old undrafted rookie, who clinched the "play of our season" with his last-minute interception that saved the game for New England on Sunday.

In fact, Brady said this week that he wants to give Butler the keys to the truck -- a 2015 Chevy Colorado -- that he received for winning MVP. But just who is Malcolm Butler? His stunning interception transformed him into a hero overnight. His path to glory, however, hasn’t at all been obvious or smooth. 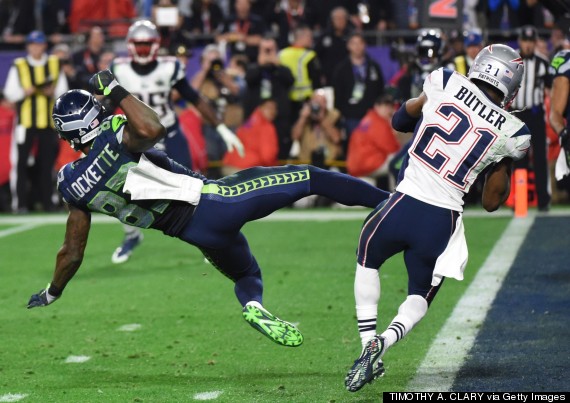 Butler had a challenging childhood and only started playing football in high school. According to The Clarion-Ledger, he played two seasons at Mississippi's Vicksburg High School, as a freshman and then as a senior, before going on to attend Hinds Community College.

The young man's football career came to a screeching halt, however, when he was booted from Hinds after playing just five games. Neither the school nor Butler has given a reason, though he was reportedly charged with possession of drug paraphernalia during that time.

Leaving football behind him, Butler went on to work at a Popeyes restaurant in Vicksburg.

Shennelle Parker, a manager at the fast food outlet, told the Washington Post that Butler had been a good employee. “He kept the customers happy and pleased. I was always pleased. He was a hard worker. Everybody in here really liked working with him,” she said.

“That just made me realize how bad I wanted it and how bad I really needed it,” Butler told the Providence Journal last year. “You don’t know how good it is until it’s gone.”

Butler was eventually invited back to Hinds, and he played there for another year. He then transferred to the University of West Alabama, a Division II school.

“The first thing I want to say is he’s a tremendous young man with a tremendous attitude,” Will Hall, Butler’s coach at West Alabama, told the Washington Post. “Every day he wakes up, every time he runs into somebody he makes their day better. He’s just one of those people.”

At West Alabama, Butler excelled on the field, becoming “one of the best cornerbacks in the Gulf Coast Conference,” according to the Providence Journal.

It was enough to get noticed by the Patriots, who signed him in May last year as an undrafted free agent. And the rest, as they say, is history.

Butler told the Providence Journal that he credits perseverance and hard work as the keys to his success.

“You’ve just got to take advantage of the great things when they come. It’s been a long road to get here. Some ups, some downs, but I never gave up. I kept pushing and kept believing. I always believed that I could play in this league. It’s just confidence, faith and hard work,” he said.