Consider this painting, which I think is a very good painting. It is by British artist and scientist Malcolm Ludvigsen: 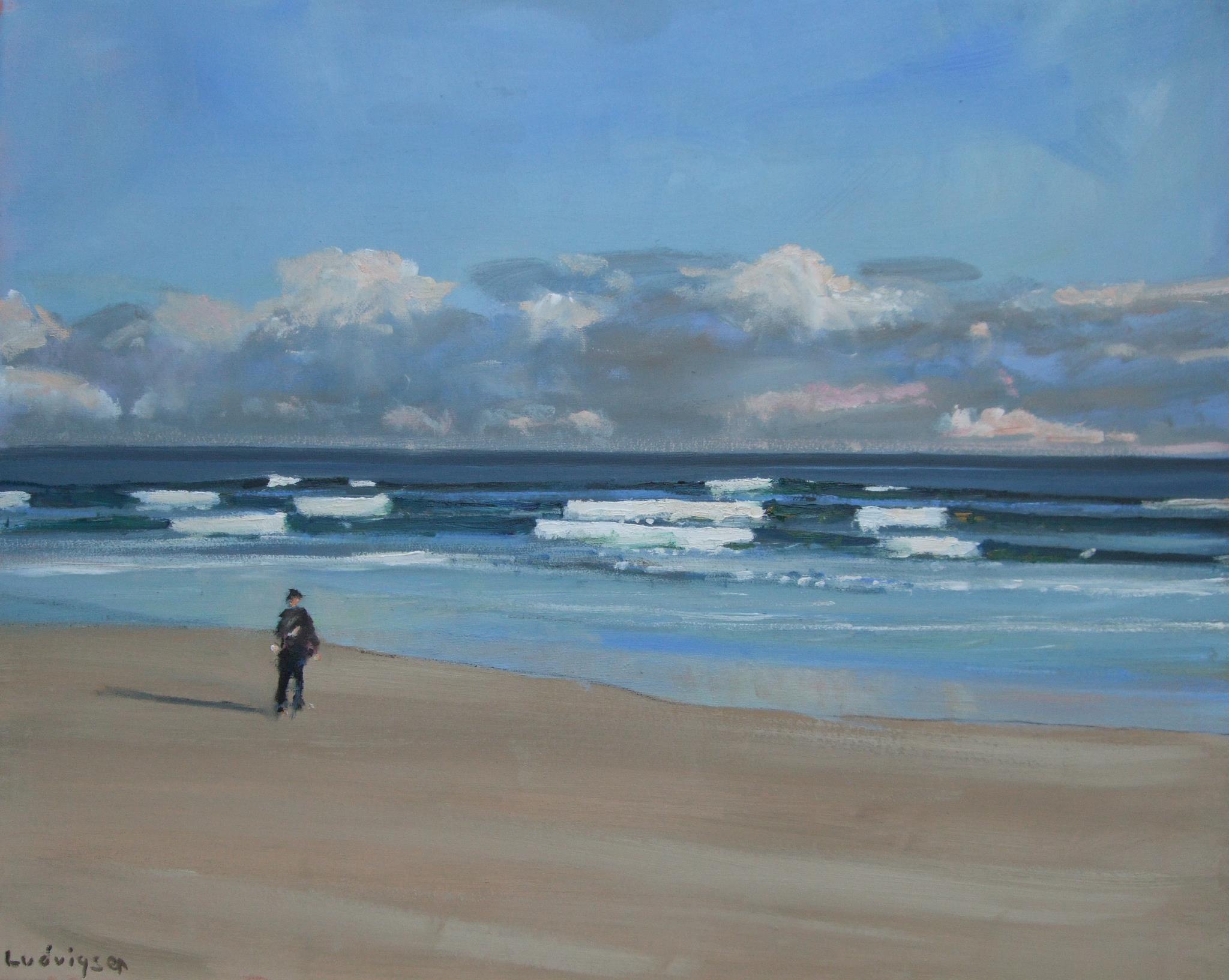 What makes this one good?

Let me explain in a roundabout way. I was raised on classical music. My best friend used to be a rock critic. He would weep bitter tears because my ignorance of the music prevented me from appreciating the brilliance of Lester Bangs. I couldn't tell the Ramones from the Replacements.

Years later, I got my revenge. He got into classical music. At first, it seemed to him like a huge, sissified, undifferentiated mass. But he studied, until he could hear the difference between broad groupings like classical and baroque. And then between individual composers of a single style. And then between pieces by individual composers, and finally between performances of pieces. Now he knows more about classical than I do.

The moral of the story is that it's not always easy to appreciate art. If you don't know the aesthetics of a field, every instance of it appears the same. It's going to take some work to get into it. That's alright -- the rewards in any branch of the arts start almost immediately.

There are lots of paintings of beaches, and oceans, and clouds, and so forth. It's a good example of a kind of painting that if you're not into it, it all looks the same, and frankly, fairly tacky and insipid.

A lot of beach-ocean-cloud painters working today are very skilled realists. They can really nail what things look like. A lot of others are extremely polished impressionists. They can dab the hell out of their paint, and nearly convince you that their well-rehearsed hash was one big happy accident.

For all the tedious work in the genre, there's nothing innately wrong with the subject itself. I think Ludvigsen's painting is special, and special in a way that makes it easy to explain why it's good. So here we are.

Let's start with the only part of this painting that's deeply realist -- the color. The beige of the sand, the blue-grey shadow of the figure, the rich blues and startling darks of the sea, those clouds, so recognizably thrusting light yellow-white heads up from a murky tan haze, and finally the varied blue of the sky, darkening as it nears the zenith. This blue recalls Ruskin:

If you look intensely at the pure blue of a serene sky, you will see that there is a variety and fulness in its very repose. It is not a flat dead colour, but a deep, quivering, transparent body of penetrable air, in which you trace or imagine short falling spots of deceiving light, and dim shades, faint veiled vestiges of dark vapour...

The realism of the color in this painting is such that if you blur your eye while looking at it, you will find it a convincing depiction of the raw nature of the scene. It will match what you see when you actually go to the beach on a day like this, and also blur your eye.

This realism is important, because it stands in such contrast with the actual orchestration of parts. The key elements of the scene are all just a little bit off. They all bear the traces of an intervention, of the processing of image through consciousness. The image does not come out uninflected, as it appears to a mechanical or electric eye. Rather, it has been transformed, made over as the expression of a consciousness.

Where are the details of the beach and the nearby water? They have been effaced.

This man, who is the darkest part of the composition, walking alone upon the strand, strikes me as a cipher, as comparable with de Chirico's metaphysical man, whose very faceless, stick-figure isolation informs us that the scene which dwarfs him reflects a philosophical concept, and not a physical event.

Consider the waves rolling in - they are not parallel with one another, and they are not straight lines. They all curve slightly; they lie on the circumferences of circles with the metaphysical man at their center. Look at the whitecaps, and the water curling under the breaking waves. The colors are true, from the whites down to the dark greens and blues. But the rendering is like a sophisticated version of a child's drawing. A child does not draw a car, but rather a box with four circles. A child reduces the real to a series of linguistic notes, of pictographic representations. So too does Ludvigsen reduce the waves, making not an image of a thing, but a symbolic representation -- dark blue-green dash, white streak, turquoise line...

These are not the waves, this is not the sea. The man's head turns to the right; he is considering the sea. This scene is not what he sees, but what he thinks. He seeks to place himself in the universe, and we observe not the universe but his process of mentation. He has forgotten himself and his immediate physical circumstances: the beach is reduced to nondescriptness. The sea advances upon him and menaces him, and he is the center of its attention. Some of the universe focuses on him, for good or ill. But the clouds proceed to the right, indifferent to him, lit by a light that is not his. This part of the universe does not focus on him. He struggles to place himself in a consistent picture, but the consistent picture eludes him.

The realism of the color, then, functions to induct us into the scene. It shouldn't be obviously expressionistic; it should, at a glance, look like reality. We are already inside the reverie by the time we realize our mistake. The painting snares us with its resemblance to ordinary representation.

Now, it would be reasonable for you to wonder -- does Ludvigsen really mean all of that? Isn't it more likely that he was just out on the beach, and he did this painting, and all the oddnesses are just because he was painting quickly, or the canvas is small, or some chance thing like that?

This painting adroitly mixes the tools of realism and expressionism to capture that sense of the infinite, alternately comforting and troubling, which we experience on the shore in solitary confrontation with the sea. It's an important mood in the lexicon of human awareness. It's common enough when we go to the shore, but rare and difficult to accomplish in painting. Ludvigsen catches it. That's what makes Bridlington, Dec 11, 2012 good.