Two weeks ago, the United Nations Working Group on Arbitrary Detention -- the U.N.'s expert panel on the rights of detainees -- released its opinion in the case of former President Nasheed. The U.N. decided that "[t]he deprivation of liberty of Mr. Nasheed, being in contravention of ... [international human rights treaties] is arbitrary." And, it concluded that the government of the Maldives should "release Mr. Nasheed immediately and accord him an enforceable right to compensation."

President Nasheed's arbitrary imprisonment is not an isolated case. It is emblematic of a broader state of repression in the Maldives today, where every opposition leader is either imprisoned or facing charges or intimidation by the government. The Maldives is now a place where 1,700 people face charges for peaceful political protest or speech, and where journalists have been assaulted, arrested or disappeared.

The government's actions since the U.N. opinion was released confirm the country's brutal decline. Its strategy is double-pronged: enact increasingly repressive measures to stifle any dissent and double down on paid lobbyists and other expensive hired hands.

On Sept. 8, the government entered into a $50,000 per month contract with the Washington lobby group Podesta. Although the government initially denied the contract, they were later forced to admit that it existed as a public record. The government also continues to instruct the legal and public relations firm Omnia Strategy at an undisclosed rate. Omnia has been engaged "to advise the Government [on] strengthening the legislative framework ... as part of the government's broader strategy for democracy consolidation in the country" as well as on the "on-going case of former President Nasheed."

But in the four months since Omnia has been providing advice, the spiral of repression has only intensified.

Amid mass protests against the government following the release of the U.N. opinion, the government stated that it "does not accept the decision of the WGAD," and a prominent MP from the ruling party labeled the Geneva-based expert panel "the janitorial staff" of the U.N. system. Following criticisms from the Commonwealth, the government also threatened to withdraw from the regional organization it has been a member of for 33 years.

The government wants the world to believe that the Maldives is a nascent democracy and a tourist paradise. But despite its expensive PR strategies, the world is not fooled.

The government's isolationism has been accompanied by chilling legal regression. The day after a press conference was held on the U.N. decision, the government announced that it would introduce a new criminal offense allowing Maldivian prosecutors to imprison anyone who calls for sanctions to be imposed on human rights violators in the government. The new law, entitled "Act on Prohibition of Calls to Boycott Tourism and Impose Sanctions Against the Maldives," covers any speech that constitutes "encouragement, participation and calls in and outside Maldives for sanctions" or even "spe[ech] about anything that would create fear among tourists or [those] visiting [Maldives] and spread any such information." The penalty is up to 10 years in prison, with a fine of up to $325,000.

In the preliminary debate on the bill in Parliament, an MP from the government's party, Riyaz Rasheed, stated that the bill was intended to silence dissent at home and abroad. Another ruling party MP, Ahmed Amir, added that the use of social media could be banned and that the constitutional guarantee of free speech should be "suspended." Rasheed was even transparent about targeting the opposition: "All these people here, who belong to [the opposition] MDP [party] should be arrested. This is what we're trying to do. God willing, that will happen now." He also urged members of Parliament to add a provision to prohibit foreigners who have called for sanctions or a tourism boycott from visiting the Maldives. This followed calls by the government's parliamentary group leader Ahmed Nihan for Nasheed's international counsel Amal Clooney and Jared Genser to be considered "enemies of the state" because they argued that travel bans and asset freezes should be imposed on serious human rights abusers in the Maldives. The bill enjoyed widespread support from the ruling party, and will now be considered for passage at the committee stage.

The introduction of this outrageous law -- draconian even by autocracies' standards -- is in flagrant violation of Article 19 of the International Covenant on Civil and Political Rights, the "bill of rights" at the international level which mandates that government should guarantee free expression. The proposal comes two weeks after the Ministry of Home Affairs published a new regulation requiring all NGOs to seek the government's permission for their projects and providing for their suspension if they engage in any activity "that could cause loss of harmony, or a national security threat." Earlier, on July 19, the attorney-general had submitted a bill under which any "expressions contrary to national interest" would constitute criminal offenses. Meanwhile the Supreme Court has dissolved the Bar Association, filed a treason case against the human rights institution that reported on the government's performance to the U.N. and ordered all independent institutions to report to the government.

All the while President Yameen has steadfastly refused to grant clemency to Nasheed, despite calls from Ban Ki-moon, other U.N. officials and independent observers around the world to free him, and despite Yameen's power under domestic law to do so.

The government wants the world to believe that the Maldives is a nascent democracy and a tourist paradise. But despite its expensive PR strategies, the world is not fooled. The government is backsliding into repression and isolationism, instead of embracing human rights and justice. It is in the interests of all Maldivians for this trend to be reversed. 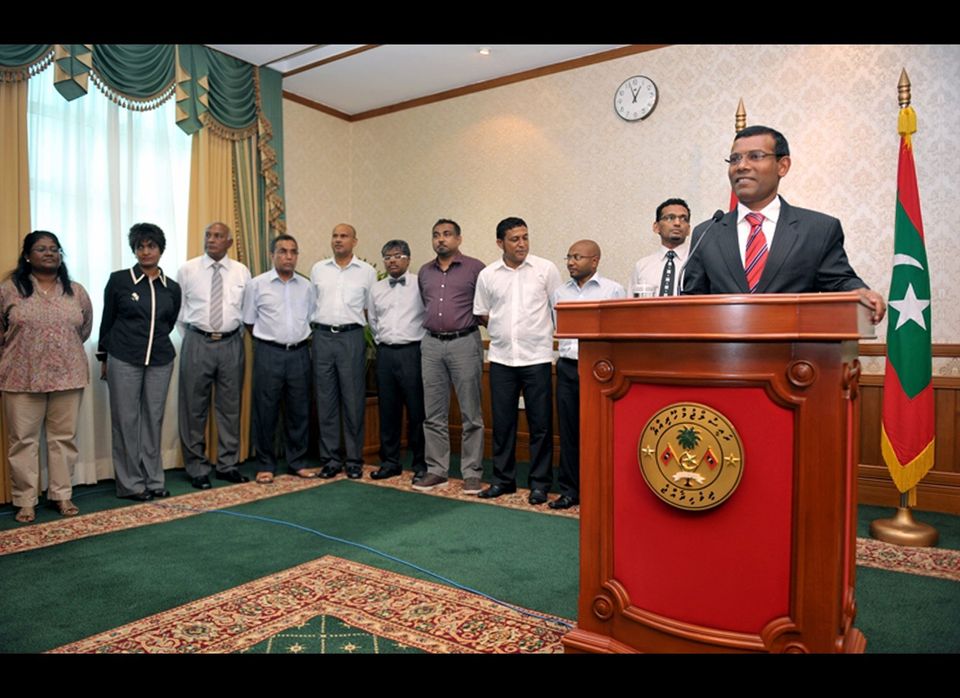 1 / 19
In this photo provided by the President's Office, Maldives President Mohamed Nasheed announces his resignation in a nationally televised address Tuesday afternoon, in Male, Maldives, Tuesday, Feb. 7, 2012. The first democratically elected president of the Maldives resigned after the police and army clashed in the streets of the island nation amid protests over his controversial arrest of a top judge. (AP Photo/President's Office, HO)
AP