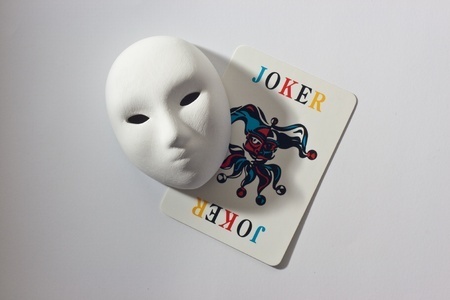 Two colleagues are shooting the breeze before a meeting. One says, with a mischievous grin," Hey, are you going to give us an update on that special project of yours that's limping along?" Somewhere else in the building, two other colleagues are wrapping up a meeting, one points to a fresh stain on an otherwise pristine shirt and says, "You'd think I would know by now how to eat in a meeting without getting it all over me. I mean, really!"

In a recent discussion I facilitated with a women's network leadership team, about acclimating to their "very male executive culture" one of the participants, Beth, said that her internal client group, all men, often took "little jabs" at each other, putting each other down in a joking way. While she viewed this as competitive and mean-spirited, soon enough she found herself poking fun at these guys in the same way. She continued, "So, in a way I was adapting to the group's culture; but I wasn't using this kind of humor to put anyone down. I was using it as a way of connecting with them, being one of them." Then Beth added, "I feel uncomfortable though because I don't want to tacitly condone their behavior. I would never even think of using this kind of humor with female colleagues."

Even humor can create and sustain a gender disconnect in the workplace, making it more difficult for women to break into predominantly male leadership ranks! How does that happen? It all begins in the playground (and perhaps even before). The goals of humor mirror the goals of play; and of course, those goals are different for boys and girls. In meeting those goals, boys and girls develop different styles for interacting, playing games that support development of different competencies.

Let's start with the male side of the equation since this is what predominantly plays out in the work world.

Male Goal = Gain top status
Boys learn about competition and develop skills for resolving conflict. Their games are about winning and losing with an elaborate set of rules often made up on the spot, typically by the group's assumed leader. Boys tend to play in groups with a hierarchical structure. They require coordinating activity, supporting development of organizational and leadership skills. They learn how to gain and maintain status in the male hierarchy. So as boys grow up they see the world in terms of their place in a social pecking order where they are either "one-up" or "one-down." I saw this first hand when my son, who was five years old at the time, was dismayed that my business partner and I had the same title, being co-owners of our company. He asked, "But mom, who is REALLY the boss?" (wanting very much for me to be "one-up") When boys negotiate, it is about trying to achieve or maintain the upper hand and to protect themselves from others' attempts to put them down.

Female Goal = Build connections
Girls, on the other hand, play games that emphasize the importance of cooperation and the development of noncompetitive skills. They play in small groups or in pairs. Games like house or dolls are role-playing games that are not about competition. Girls grow up seeing the world in terms of being an individual in a network of connections. Negotiation is to resolve conflict, to gain support, to close a rift, to be closer and to gain consensus. Although there are hierarchies in their world, girls' hierarchies are of friendship rather than of power and accomplishment.

So, moving out of the playground, and back to the grown-up world of work, we see how humor parallels these same goals.

Whereas men use humor to subtly give negative feedback or to knock someone down a peg who is trying to take a dominant position over them; women use humor to connect, like Beth did with her all male group of colleagues. What is most interesting about this though, is that Beth used a style of male humor, the put-down zinger, to achieve her goal - not of jockeying for a more dominant position - but to connect in a collegial way. And even more interestingly, her male colleagues perceived her as playing along rather than trying to gain status over them. Because it was coming from a woman, the same style of humor that they use was seen (at least at some level of consciousness) as serving a different purpose. Same humor, different goal.

Women use humor to create moments of connection by breaking the tension, like keeping a running joke going when they are in a tough meeting, providing "comic relief."

They also connect through self-deprecating humor, particularly to those who are further down in the organization's hierarchy, It isn't meant to "put themselves down", as it is aimed at their personal characteristics or habits, not at their capability or expertise. Self-deprecating humor from executive women also conveys, "Hey, I'm just like you," and deliberately aims to erase any perception of "being one-up." (Something we know that men don't take kindly to.)

Carol Vallone Mitchell, Ph. D. is the author of the new book Breaking Through "Bitch" - How Women Can Shatter Stereotypes and Lead Fearlessly and cofounder of Talent Strategy Partners.