"As long as there's life, there's hope, right?" asks Malini Goel, narrating her subtly powerful and transcendent documentary, "Should Tomorrow Be," and once you see it, you realize it's a rhetorical question. Not that hope was any given during initial production, as the lawyer and environmental policy analyst-turned-filmmaker's father, then-recently-retired cardiologist Dr. Arun Goel, fell at home in 2006, snapped his neck, and suffered the same complete paralysis that grounded Superman himself, Christopher Reeve. As her vibrant, devoted, globetrotting dad became a vent-dependent quadriplegic and abruptly faced a full-on existential dilemma -- should he stay or should he go now? -- Ms. Goel instinctively began videoing his very brave and indisputably inspiring transformation. Years later, incorporating the vital presence of family, friends, and especially her mother -- Arun's wife, retired pediatrician and terrific singer Sarla Goel -- Malini's documentary truly defines moving picture.

"Should Tomorrow Be" (award-winning from Spain to South Bend) screens this Thursday in Los Angeles at the Evolution Mallorca International Film Fest: See the Winners -- and it first came to me via the huge, 11th annual HollyShorts Film Festival, where I served as a judge for short documentaries, and thus it was my good fortune to meet and interview its director. Amidst over 400 shorts, Ms. Goel's film wowed me. It's real in the best way. It actually dares to ask the ultimate question of life, the universe, and everything (and its answer is even better than "42"!) The questions I posed weren't quite that epic, but sitting together in an office above Hollywood Boulevard, I started off with a fun hook, and Ms. Goel found the soul. 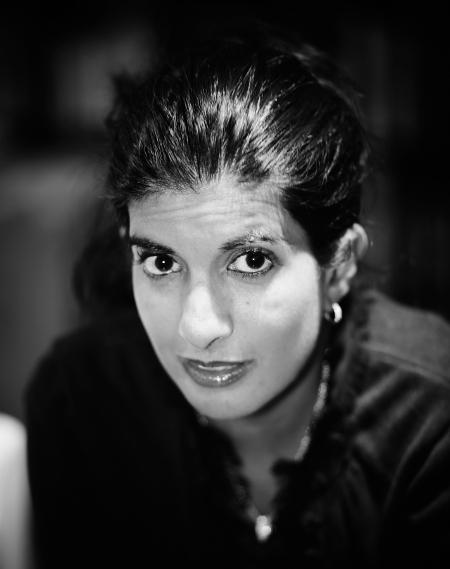 How serious was your dad about marrying off you and your brother [Dr. Rajiv Goel], like, instantaneously?

Absolutely serious. I think that's in the DNA of any Indian father that has ever existed. It's like: 'I want my kids to get married, and then I can just, you know, live and die peacefully' -- it's sad that I'm still not married. (laughs) Little late, little late, Dad! But yeah, he was serious.

Did you and your brother have a chat about this?

Well, he had a girlfriend at the time, and they wound up getting engaged in the hospital room, so it was a little expedited. I knew that I had to engage in some pretty Herculean efforts to make that happen for myself in two days; I didn't think it was going to be. But it did cross my mind to do something rather absurd.

Do something absolutely insane, you know, why not? People have arranged marriages in India, and we have all sorts of ratios of success for marriage in this country. You never know -- it might've worked. 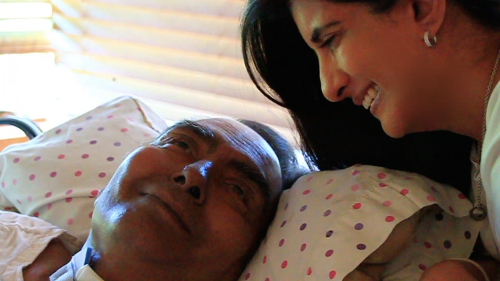 Arun and his daughter

That's true. Do you have family members who've had arranged marriages?

They're actually in the U.S., and they have very successful marriages, yes. My parents had a love marriage, but a lot of my aunts and uncles had arranged. Like, meet a few times, and then get married, and they're super happy. You wouldn't even know.

How long were your parents together before this happened? Prior to the accident?

They were married 38 years, and they courted for five years, before that. They met in medical school. 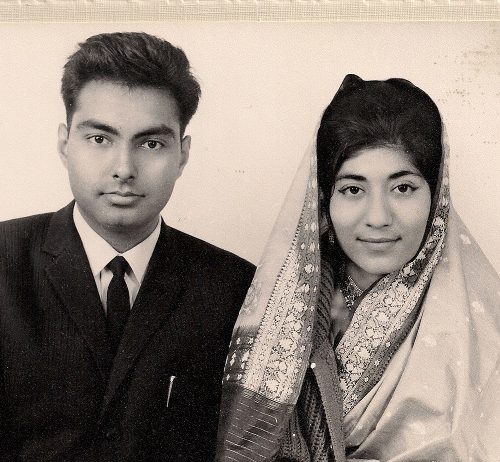 How did your parents' mode of communication change? It's in the film, to some extent, but what did you perceive in how they communicated following the fall?

In terms of physical communication -- and I'll get into the nuanced, sort of, actual human communication -- we had to use boards. Even when my dad was intubated and a bit after, even before some of the clips in the movie when he can speak, I made boards, you know: 'Do you want ice chips? Blink.' 'Are you hot?' Because he couldn't speak, so we'd have that going on. We'd all have to be hyper-alert to what he needed.

In terms of communication between my parents, the one thing that's interesting is: you don't see -- amongst Indian parents, that often, who emigrated from India -- you don't see overt affection and love. And before the accident, the irony was I didn't really see what you maybe see in the United States, or in movies, or something. But I saw so much love between the two -- I mean, you can see it in the film. And it wasn't visible necessarily, before, but it was so visible afterwards, because, as human beings, we take for granted the people whom we love in our lives. And when you're faced with your spouse of 38 years, or whoever it is you love, whatever family member it may be -- leaving -- you are not going to hold back. Because you don't have the time to do so.

You're not going to hold back in letting that person know how much you care -- and a lot of it was just fight-or-flight: we have to take care of him; we have to figure this out; but, you know, you want to tell that person you love them, before they go. So: more affectionate, more open, more communicative, more expressions of love. And trying to understand the other person's perspective. My mom was really trying to understand him. She didn't want him to suffer. But then, how do you say goodbye to someone? How do you agree to someone basically -- deciding to die?

I think his deciding to die was also kind of motivated by love too. Apart from actual medical issues, he did not want to be a burden on his family. It was his love and concern for us. Then it was like -- which love will prevail?

Was he as dedicated to that notion -- like: 'On Wednesday, we do the act'? Do you think he really wanted to go there, until he was convinced otherwise?

Yeah, that was gonna happen on Wednesday, and they were gonna pull the plug, so to speak, and, you know: Adios. 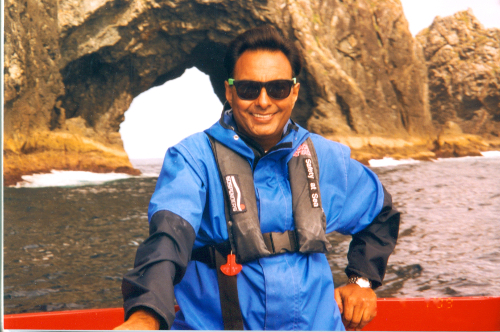 Well, when did his wit return? Because it's fairly sharp.

When did it ever go? When I went to the emergency room on night one, on the first night, he cracked a smile! He must have been in the most excruciating pain of his life, and he's cracking a smile -- basically for us, to let us know he's all right. But he's always been witty and funny.

You didn't start out to make a film. You were making home movies, essentially, to record Dad.

That's it -- like, okay: My dad broke his neck, and he's deciding to die, and I can't do anything about it. I'm a lawyer, doesn't matter -- can't do anything. He's competent to make that decision. My hands are tied. Talk to the forensic psychiatrist: 'Nope, he's competent to do that, that's what he's choosing to do.' So I just researched, and researched, and researched. I have two ways of kind of healing myself, or rationalizing, or coping -- and it was researching, like trying to research my way out of this predicament; and then number two is documenting: just document this time with Dad. Everything. Just document it.

What was the catalyst for picking it up again?

I had a friend from grad school who had done a documentary on female infanticide in Armenia. I went to her premiere in New York, and I told her, 'I have all this footage. I haven't looked at it, and I'm curious what it would say, and what would be in it. And I think I could tell this story, which I think is potentially remarkable -- or human -- or something that might impact--' I just didn't know. She was like, 'Oh, you should watch it! You should do it!' [Ms. Goel adds sound effects denoting camaraderie and enthusiasm.] I did -- I watched the footage, and what I found were a lot of unscripted gems.

The impetus was to show it privately? Just share it, so you have a family scrapbook, kind of?

Right. But more than that -- I wanted to make it something. And then we thought about it, and people encouraged us: 'You have to share this! You have to get it out there!' So we talked about that, and we said, okay, if it will benefit other people, then we'll share it. 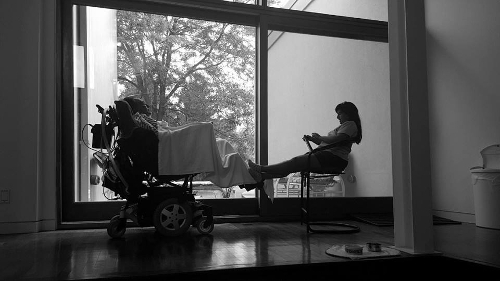 Benefit people this film does. Ms. Goel holds a Communications degree, a JD, and a Masters in Law and Diplomacy. She focuses on international environmental and social justice issues, has worked with the United Nations, somehow finds time to design eco-friendly toys, and is pondering a feature to follow "Should Tomorrow Be" -- the story of her steadfast father Arun, adorned by her mother Sarla's beautiful singing. Amazing family, amazing filmmaking debut.