Move over Demi Lovato. There's a new cool empress for the summer and her name is Malka Red. Red's "Boy Booty" is making serious waves across the Internet for good reason. The catchy song will not only make squads want to put on their dancing shoes and hit the nearest posh club in the meatpacking district, it will force record executives to take a long, hard look in the mirror. The song puts the music industry on notice by making a very loud and proud statement. If women's bodies are constantly objectified in the business, how come men's exteriors are never held to the same standard?

Malka Red learned at a young age that she had a talent for standing out from the crowd. She grew up doing theatre in Las Vegas. Not only did she have a knack for being dramatic, she learned that she had the skill of speaking quickly. In ninth grade, she won a speed talking contest that involved a tongue twister where she easily blew away the competition. Red would later become one of the valedictorians her high school graduating class and was able to put her talent to the test. "I spoke at graduation...There were seven valedictorians. They gave each of us a minute and a half. I had to do something interesting and I really just didn't want to be boring so I rapped." On becoming Malka Red, she explained, "Malka means queen in Hebrew. I wanted more of a first name, last name kind of thing. It's Red Queen. While studying evolutionary anthropology at Brown I read Lewis Carroll's Through The Looking Glass. In the book, the Red Queen says to Alice 'around here you've got to run to stay in place.' They run but they don't get anywhere. Evolutionary biologists have used the book to say organisms need to keep evolving just to stay in existence. So I say other rappers need to evolve to keep up with Malka Red." 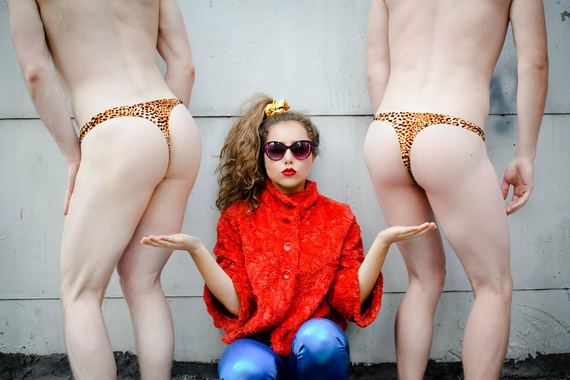 Everything about Malka Red is unapologetic. She doesn't back down from what she believes in and is more than happy to tell her audience just that. "I've known since I was little that women's bodies are used to sell everything. Alright fine, I'm going to use your [men's] bodies to sell my music," Red said in the exclusive interview. In the opening bit of the music video for her single, anonymous voices on the other end of the telephone exclaim that if she wants to get to the next level, she has to show some skin. Red doesn't hesitate to turn the tables on thirsty guys who expect a T&A show from the energetic rapper. She went on to explain, "I was wearing whatever I wanted. Men would give me advice about how to dress. Especially men who didn't know anything about music -- people who aren't musicians giving me advice telling me to look sexier." The director of the music video Lee Milby played a large part in the fun visual aspect of the project.

"I started doing videos at nightlife events. I also did videography at EDM parties," Milby explained. Milby's first love was oil painting. Unfortunately, after becoming allergic to oil painting following her senior thesis show at Cooper Union, Milby had to figure out other ways to stay creative. "I felt that video was the closest thing I could get to painting."

Some of the best things in life are a matter of happenstance. The collaboration of "Boy Booty" is living proof of that. The music video was shot in a single day with only six weeks of preparation ahead of time. Most of the men in the video are friends of Malka Red. During stage performances of "Boy Booty", Red pulls guys from the crowd to perform with her. One of those guys, Jordon Waters, wound up choreographing the viral video. The tale of how Malka Red and Lee Milby became a dynamic duo was even stranger. "We both met a quantum physicist at a bar. We both became Facebook friends with him and he hooked us up. That's how the video came to be," Milby laughed while discussing the origins of her friendship with Malka Red. There has never been a more New York story. 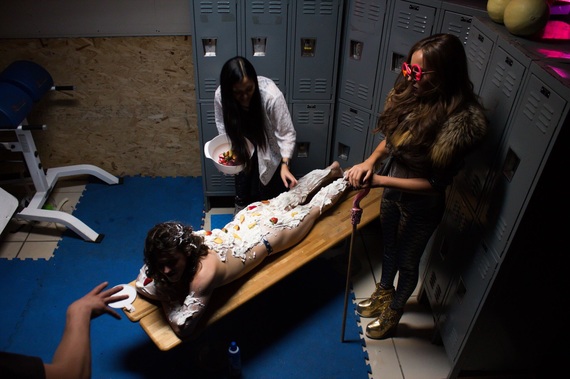 The team of Red and Milby with the backing of producer Sharan Kukreja created an energetic spectacle that leaves viewers with no other choice but to pay close attention to the action on their computer screens. "The only reason it's goofy and funny is because it's about men's bodies. If it was a song about girls' butts it wouldn't be funny, it would just be normal. Women's butts are in people's faces all the time," Red said confidently. Truth be told, it's hard to look away from the music video when a man wearing a Donald Trump mask gets assaulted by a wide variety of costumed characters.

"He doesn't seem to consider women to be human beings. It was very satisfying to beat him up," Milby grinned. "There's so much comic gold to be found with Donald Trump," Red quickly followed without missing a beat.

Sadly, the presidential candidate isn't the only one who would objectify women. On the topic of mainstream radio, Malka Red shared, "I would hear all these songs on the radio about women's bodies and it became crazy and ridiculous about how many songs there are. I have dozens and dozens on a study playlist. It's ridiculous with the obsession over women's bodies. That's where the song came from. I had a response to this." Test audiences that consisted of male students at Harvard cringed when they were shown the music video. Not surprisingly, straight men who aren't used to seeing their own bodies sexualized would have that reaction even while being enrolled in an elite university. One student exclaimed, "There's a fine line within comedy rap." The rapper simply responded, "Who are you?" Red and Milby shared their experiences on what they encounter on a daily basis after walking out the front door of their homes. Milby sighed, "It doesn't matter what you look like. Some guys think, you look like a female, I'm going to make a comment on your butt even if you're wearing a long coat." Malka Red backed the director up by saying, "It really feels bad. I get cat called at least three times a day." Milby and Red both feel that catcalling is a form of bullying. On the flip side when women were shown "Boy Booty," they all yell, "Finally!" Red said with a glowing laugh.

Both Red and Milby plan on staying creative for a long time to come. Milby plans on sticking with music. Milby passionately said, "I really want to do more music videos. You have a song and you get to work with an artist with their creative vision and you get to help them bring it to life. I'm also working on a short film about a pyromaniac." Red wants to keep writing and performing. With a smile, she said, "I want to find ways to tackle issues that are important to me in humorous, light and easily digestible ways. It's like a green smoothie, you got your veggies in there. There's something underlying that. Something substantial there."