WASHINGTON -- Before a sell-out 1,200-person crowd seated in a tent on the National Mall on Thursday, three winning plans were announced as part of a competition to redesign areas of the expansive space commonly called "America's Front Lawn."

Using its fifth-anniversary luncheon as a venue, the non-profit Trust for the National Mall named the jury-selected winners for redesigning Constitution Gardens, an area just north of the World War II memorial; the grounds of the Washington Monument, including the Sylvan Theater; and Union Square, the area at the foot of Capitol Hill that was transferred to the jurisdiction of the Architect of the Capitol earlier this year.

The winning design for Constitution Gardens, put together by Rogers Marvel Architects & Peter Walker and Partners, features a new restaurant and pavilion, a grass amphitheatre and other gathering spaces along Constitution Gardens' pond, part of which can be used as an ice skating rink in the winter.

The winning design for the Washington Monument grounds and Sylvan Theater, put together OLIN + Weiss/Manfredi, reorients the current theater space to face the monument -- using a restructured terraced lawn and wooded canopy -- and creates a new all-weather café and indoor gathering space at the southeast corner of the site.

The winning design for Union Square, by Gustafson Guthrie Nichol & Davis Brody Bond reorients the reflecting pool at the foot of Capitol Hill while creating north and south terraces that can be used for public events or refuges for tourists. The winning design will be forwarded to the Architect of the Capitol since Union Square now falls under congressional jurisdiction.

The National Park Service, the agency that has jurisdiction over the Mall, its adjacent federal parkland and monuments, will now take the winning designs for Constitution Gardens and the Washington Monument grounds and prepare them for environmental and historic preservation review.

Fundraising will also begin to make the designs a reality. According to event organizers, the benefit luncheon has raised nearly $7 million for the Trust for the National Mall's efforts to improve and rehabilitate the Mall.

In remarks before Thursday's luncheon, Interior Secretary Ken Salazar said that "[a]nytime you want to do any thing with the Mall, it is a very difficult thing," acknowledging the various jurisdictions and interests involved in such an iconic American space.

But Salazar, formerly a senator from Colorado, said he was excited for what's to come for the National Mall, especially as the National Park Service's 2016 centennial approaches.

"Take a stroll from the Capitol to the Lincoln Memorial and you'll see a truly transformational space," he said, noting work that's been done to improve and rehabilitate areas near the Jefferson Memorial, Tidal Basin and the Lincoln Memorial's reflecting pool.

Salazar said that the National Mall's turf takes a beating from tourists and special events -- some that can include military equipment -- and that he's trying to find a way to "hardscape" part of the Mall to better accomodate the wear and tear.

Laura Bush, the honorary chair for the Campaign for the National Mall, was the keynote speaker at the luncheon and told the crowd stories about the symbolism and importance of "America's Front Lawn."

Bush said that as first lady, she would sometimes put on a baseball cap and take discrete early morning walks on the Mall's gravel paths, "blending in with joggers and walkers" and how on previous family excursions, she visited the Smithsonian's National Air and Space Museum.

The Mall is "a place where history is made ... and saved," the former first lady said, pointing out the various historic structures that make up the great space. "These are not just dots on a map ... but a special place for each visitor."

Click through the slideshow below to see the winning designs and scenes from Thursday's luncheon.

UPDATE: After being awarded the Constitution Gardens project, the firm of Rogers Marvel Architects announced that it would split in the summer of 2013. The successor firm of Rogers Partners is now handling the project. 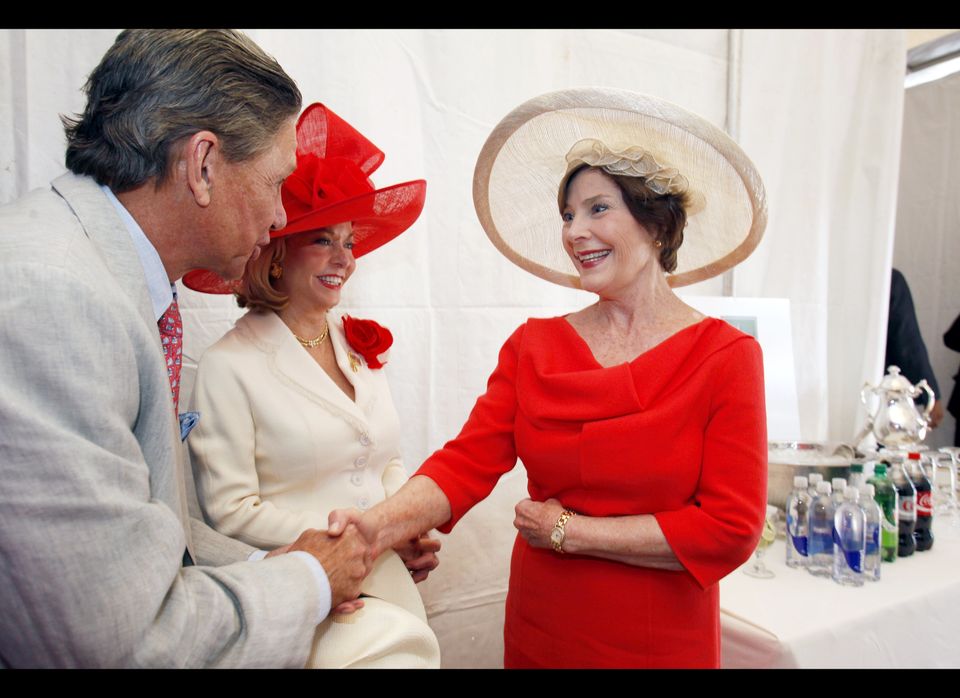