During September 2008 hysteria hit the financial markets and the economy dived. Hundreds of billions of Lehman Brothers' liabilities dried up when it went bankrupt on September 16. A day later the Federal Reserve gave AIG an initial bailout of $85 billion. AIG was unable to pay its huge losses on insurance products that were exempt from insurance regulations. The following week the Fed announced that two large investment banks, Goldman Sachs and Morgan Stanley, would be made commercial banks allowing them readily available borrowing authority from the Fed's "discount window."

Immediately after the recession took a dramatic dive in September 2008, the Bernanke Fed implemented a policy that continues to further damage the incentive for banks to lend to businesses. On October 6, 2008 the Fed's Board of Governors, chaired by Ben Bernanke, announced it would begin paying interest on the reserve balances of the nation's banks, major lenders to medium and small size businesses.

You don't need a Ph.D. economist to know that if you pay banks ¼ percent risk free interest to hold reserves that they can obtain at near zero interest, that would be an incentive to hold the reserves. The Fed pumped out huge amounts of money, with the base of the money supply more than doubling from August 2008 to August 2010, reaching $1.99 trillion. Guess who has over half of this money parked in cold storage? The banks have $1.085 trillion on reserves drawing interest, The Fed records show they were paid $2.18 billion interest on these reserves in 2009.

A number of people spoke about the disincentive for bank lending embedded in this policy including Chairman Bernanke.

I spoke against this policy in January 2009 at the National Press Club and at Chapman University Law School. Jim McTague, Washington Editor of Barrons, wrote in his February 2, 2009 column, "Where's the Stimulus:" "Increasing the supply of credit might help pump up spending, too. University of Texas Professor Robert Auerbach an economist who studied under the late Milton Friedman, thinks he has the makings of a malpractice suit against Federal Reserve Chairman Ben Bernanke, as the Fed is holding a record number of reserves: $901 billion in January as opposed to $44 billion in September, when the Fed began paying interest on money commercial banks parked at the central bank. The banks prefer the sure rate of return they get by sitting in cash, not making loans. Fed, stop paying, he says."

Shortly after this article appeared Fed Chairman Bernanke explained: "Because banks should be unwilling to lend reserves at a rate lower than they can receive from the Fed, the interest rate the Fed pays on bank reserves should help to set a floor on the overnight interest rate." (National Press Club, February 18, 2009) That was an admission that the Fed's payment of interest on reserves did impair bank lending. Bernanke's rationale for interest payments on reserves included preventing banks from lending at lower interest rates. That is illogical at a time when the Fed's target interest rate for federal funds, the small market for interbank loans, was zero to a quarter of one percent. The banks would be unlikely to lend at negative rates of interest -- paying people to take their money -- even without the Fed paying the banks to hold reserves.

The next month William T. Gavin, an excellent economist at the St. Louis Federal Reserve, wrote in its March\April 2009 publication: "first, for the individual bank, the risk-free rate of ¼ percent must be the bank's perception of its best investment opportunity."

The Bernanke Fed's policy was a repetition of what the Fed did in 1936 and 1937 which helped drive the country into a second depression. Why does Chairman Bernanke, who has studied the Great Depression of the 1930's and has surely read the classic 1963 account of improper actions by the Fed on bank reserves described by Milton Friedman and Anna Schwartz, repeat the mistaken policy?

As the economy pulled out of the deep recession in 1936 the Fed Board thought the U.S. banks had too much excess reserves, so they began to raise the reserves banks were required to hold. In three steps from August 1936 to May 1937 they doubled the reserve requirements for the large banks (13 percent to 26 percent of checkable deposits) and the country banks (7 percent to 14 percent of checkable deposits).

Friedman and Schwartz ask: "why seek to immobilize reserves at that time?" The economy went back into a deep depression. The Bernanke Fed's 2008 to 2010 policy also immobilizes the banking system's reserves reducing the banks' incentive to make loans.

This is a bad policy even if the banks approve. The correct policy now should be to slowly reduce the interest paid on bank reserves to zero and simultaneously maintain a moderate increase in the money supply by slowly raising the short term market interest rate targeted by the Fed. Keeping the short term target interest rate at zero causes many problems, not the least of which is allowing banks to borrow at a zero interest rate and sit on their reserves so they can receive billions in interest from the taxpayers via the Fed. Business loans from banks are vital to the nations' recovery. 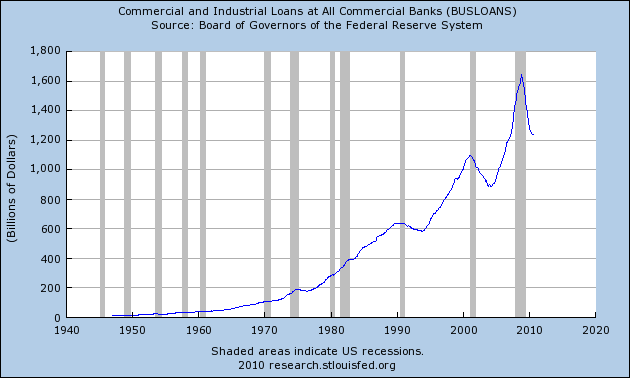 Professor of Public Affairs, The University of Texas at Austin