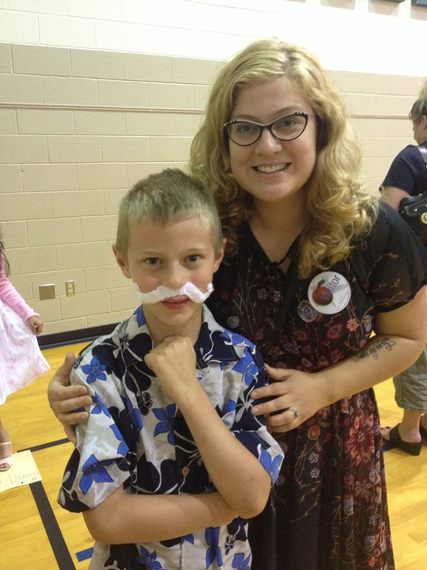 I heard something strange in the doctor's voice that made me look up from the "Your Child's Eyes" brochure that I had been distractedly skimming. "Hmmm?" I murmured softly, half-listening but lifting my head. "What's that?"

"We should dilate his eyes today, just to be safe." She repeated to me, as she reached up into a cupboard behind the examining chair.

"To be safe?" I was confused. "Does he need glasses?" I glanced back down at the brochure on my lap, with the the little girl in purple frames staring back at me from the front cover.

"Not glasses, no. His optic nerves are..." She stopped talking long enough to place an eye drop in my son's left eye. "Look up." She commanded and dutifully I obliged, only to realize she wasn't speaking to me. After she set the bottle of the dilating drops on the counter, she turned to face me. "His optic nerves are cupped."

"What does that mean?" I asked her, just as firmly.

"Well..." She stared at me over the head of my blond haired son. I couldn't exactly read her expression, my own eyes suddenly felt blurry. "We worry about glaucoma," she said matter-of-factly. I wondered, suddenly, exactly who "we" were. The doctor and I? The doctor and her imaginary posse of colleagues? She went on: "I'm sure it will be okay, once I get a better view. We will know more when I look at his eyes in a minute."

Fifteen minutes later we were leaving the optometrist's office holding a referral for a pediatric ophthalmologist.

My son was holding my arm, wearing sunglasses to shield his dilated eyes from the harsh light. My heart had taken up residence in my throat.

We were most certainly not okay.

Sometimes when you are prepared for it, when you've made peace with it, bad news comes as an odd sort of relief. When as a parent, you feel something is off, you feel calmer than you should when the truth hits you like a ton of bricks.

This is how it felt when the doctor told me about my boy's eyes.

As we sat in the little room on the second floor of a big office building, I watched her pretty face contort with words that were foreign to me. Interocular Pressure. Corneal Thickness. Glaucoma suspect. The doctor was young, maybe even younger than me. She had dark brown eyes that were perfectly lined. She must have 20/20 vision and a steady hand to draw her eyeliner that perfectly. Of course she does. My son squinted from the opthamologist chair at the TV screen across the room, but I kept my eyes fixed on this young woman's beautiful face.

He should go to the eye hospital. I want to order more tests.

I just stood at the front desk and scheduled tests.

Frankie stood beside me and grinned behind his dark sunglasses. "I get an Xbox card, don't I?" he asked.

"You sure do, my boy!" I answered, with a brightness I did not feel.

So we shuffled off from that office, my son nearly as tall as me and not even ten years old.

I held Frankie's arm because I did not know what he could see, with his dialted eyes and his dollar store wayfarers. I held his arm because I wanted to keep him close. We muddled down the hall, an unlikely duo of unknown fortune.

In the handbook of parenting, no one mentions these tests.

We stood waiting for the elevator for a full five minutes and still it didn't come. I pressed the button again and again, with all the anger of a mother who couldn't make everything bad go away.

"Where is the damn thing?" I kept banging on the button.

"Are you sure?" I asked him uncertainly. Inside my brain an alarm beeped ceaselessly: THE STAIRS? NOT THE STAIRS! YE GOD, NOT THE MOTHERFREAKING STAIRS!

And this is where my heart swelled into my throat and my eyes bleared again. But begrudgingly I let the boy in the sunglasses step into the stairwell.

"I've got you, love," I told him, hovering, trying to guide him.

"It's okay mom, It's no big deal. I can take the stairs! I can see now." He slid the sunglasses down to the end of his nose and peered out at me with beautiful cornflower eyes, wide. "See?"

But on the landing of the medical building on Newman Street and Outer Drive, my boy with the "maybe bad" eyes saw things that were unseen to me.

And that was when I let go of his arm.

And untouching, side by side but still near, my boy and me, we took the stairs. 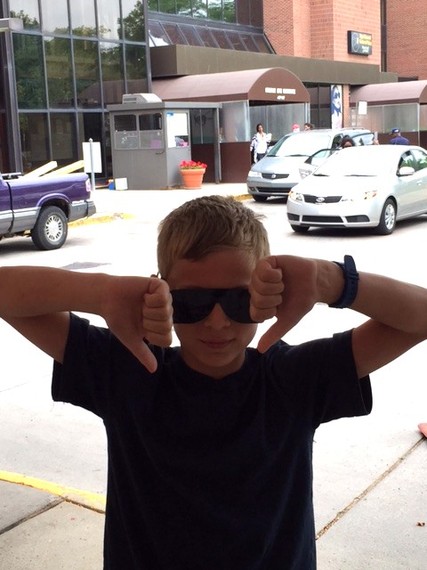