WASHINGTON (AP) -- Some of the earliest Americans turn out to have been artists.

A bone fragment at least 13,000 years old, with the carved image of a mammoth or mastodon, has been discovered in Florida, a new study reports.

While prehistoric art depicting animals with trunks has been found in Europe, this may be the first in the Western Hemisphere, researchers report Wednesday in the Journal of Archaeological Science.

"It's pretty exciting, we haven't found anything like this in North America," said Dennis J. Stanford, curator of North American Archaeology at the Smithsonian's National Museum of Natural History, who was a co-author of the report.

They hunted these animals, Stanford explained, and "you see people drawing all kinds of pictures that are of relevance and importance to them."

"Much of the real significance of such finds is in the tangible, emotional connection they allow us to feel with people in the deep past," said Dietrich Stout, an anthropologist at Emory University in Atlanta, who was not part of the research team.

The bone fragment, discovered in Vero Beach, Fla., contains an incised image about 3 inches long from head to tail and about 1 3/4 inches from head to foot. 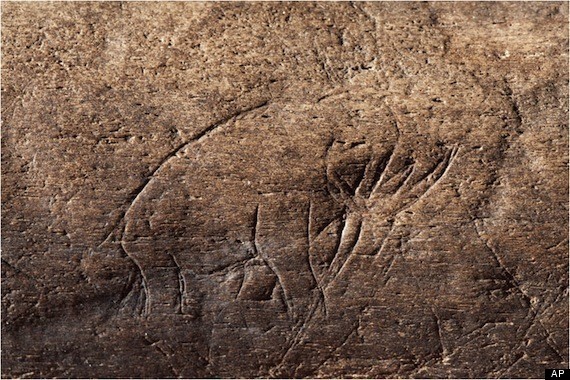 "There was considerable skepticism expressed about the authenticity of the incising on the bone until it was examined exhaustively by archaeologists, paleontologists, forensic anthropologists, materials science engineers and artists," lead author Barbara Purdy of the University of Florida said in a statement.

The bone was found by a fossil hunter near a location, known as the Old Vero Site, where human bones were found side-by-side with the bones of extinct Ice Age animals in an excavation from 1913 to 1916.

It was heavily mineralized, which prevented standard dating, Stanford explained. But mammoths and mastodons had died out in the Americas by 13,000 years ago, so it has to be older than that. "It could be quite early," he added.

But the researchers wanted to be sure it was not a modern effort to mimic prehistoric art. They compared it with other materials found at the site and studied it with microscopes, which showed no differences in coloration between the carved grooves and the surrounding material. That, they said, indicated that both surfaces aged together.

In addition, the researchers said, there were no signs of the material being carved recently or that the grooves were made with metal tools.

"It either had to be carved from direct observation when the animals existed or has to be a modern fake" and "all indications are that the carving is the same age as the bone," said anthropologist Christopher J. Ellis of the University of Western Ontario, who was not part of the research team.

The only other report of an ancient bone in North America carved with the image of a mastodon came from Mexico in 1959, but questions were raised about that object and it subsequently disappeared.

It does appear to be the first American depiction of a mammoth or mastodon, said anthropologist David J. Meltzer of Southern Methodist University.

"I think the authors did a reasonable job making the case for the piece being genuine," added Metzger, who was not part of the research team.

The new discovery was made by James Kennedy, a fossil hunter, in 2006 or 2007. Kennedy noticed the image in 2009 when he was cleaning the bone and he then contacted researchers who began their study of the artifact.

The newly found North American image is similar to some found in Europe, raising the question of whether this is merely coincidence or evidence of some connection between the two, the paper noted.

Stout said the suggestion that the similarities between this and ancient European art might imply some cultural contact or movement of people across the Atlantic very early is controversial. That idea has previously been proposed by Stanford and others, but has attracted a lot of criticism and skepticism from other archaeologists, he said.

Metzger, too, said he doesn't "for a moment, think the specimen begs any questions about the larger issue of the peopling of the Americas. It's just one specimen - albeit an interesting one - of uncertain age and provenance, so one should not get too carried away."