MANILA, Philippines (AP) — A man died and nearly 1,000 people were hurt in a raucous Roman Catholic procession attracting up to a million Filipinos in the capital Friday in a prelude to a much larger turnout expected during next week's visit by Pope Francis.

Huge crowds jammed Manila's streets and jostled to get closer to the wooden Black Nazarene, a statue of Jesus Christ carrying a cross that the faithful believe has miraculous power to cure ailments and provide good health and fortune.

Despite the casualties, Moreno said the procession has been generally peaceful.

She said any emergencies will help the Red Cross prepare for the papal visit. At least 20 field hospitals will be established in Manila next week, including one with an operating room, she said.

"This is like a mini-papal event in scope," police Senior Superintendent Jigs Coronel said. "We'll be able to put to a test our security plans, crowd control, anti-crime measures, emergency and medical response."

The statue of Christ, crowned with thorns, is believed to have been brought from Mexico to Manila on a galleon in 1606 by Spanish missionaries. The ship caught fire, charring the statue that was named the Black Nazarene. Some believe that mystical powers have allowed the statue to withstand fires, earthquakes and even intense bombings during World War II.

Police say up to 1 million people joined or watched the procession, but crowds have thinned to a little over 900.000 by Friday evening. Officials and church leaders expect millions will show up for the Jan. 15-19 papal visit.

About 5,000 police were deployed for the daylong event Friday, with 1,000 military personnel on standby, Coronel said.

Crowds threw small white towels at volunteers manning the statue's carriage to wipe parts of the cross and the statue in the belief by devotees that the Black Nazarene's mystical powers will rub off on them.

Mary Rose Ricafort carried a small replica of the Black Nazarene as she followed the procession. "I want my father to get well," she said, adding he had suffered a stroke.

Joel Talaban, a 51-year-old storeowner, said he has been a devotee for three years and hopes that by finishing the procession "I will be able to give a good life to my children and keep them away from vices, and also to ask for our daily sustenance."

The procession is slowly snaking through crowds along 7 kilometers (4 miles) of streets before ending at Quiapo Church, home of the Black Nazarene in central Manila. Moreno expected this year's procession to end early Saturday, around 18 hours after it started. 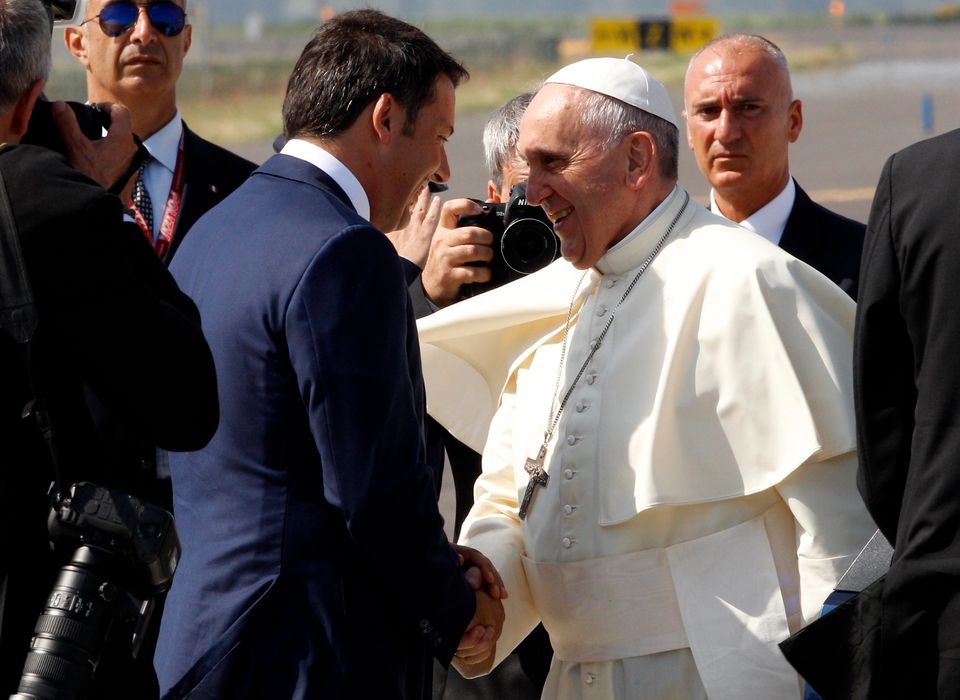 1 / 9
Pope Francis is greeted by Italian Premier Matteo Renzi, left, as he arrives to board a plane to South Korea, at Rome's Fiumicino international airport, Wednesday, Aug. 13, 2014. Pope Francis is leaving for a five-day visit to South Korea marking the first time in a quarter-century that a pope has been on the divided Korean peninsula. Francis plans to bring a message of peace and reconciliations to Koreans on both sides of the 38th parallel, while encouraging Catholics in the region to spread their faith. (AP Photo/Riccardo De Luca)
ASSOCIATED PRESS