A Georgia man says he was so angry after a phone call with his wife that he drove his truck through his house.

John Paul Jones, Jr., 35, of Senoia, says he fully intended to drive his truck from the backyard to the front yard by way of his living room on Thursday.

The Newnan Times-Herald reported that Jones told authorities he'd been frustrated because he hadn't been able to sell his home, but Jones told WGCL that the incident was "just one of those spur of the moment crazy things." 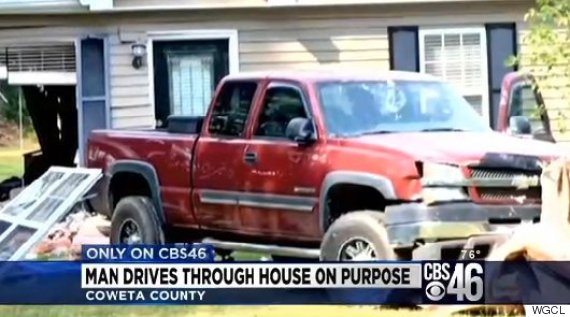 Jones, who works as a contractor, did his own repairs. He appeared in good spirits when WGCL interviewed him on Sunday.

"I've been out of work for the past year and a half. Needed some work," Jones told WGCL. "It didn't pay anything, but hey, it kept me busy."

Neighbors heard a ruckus around 4:40 Thursday afternoon and called police. Coweta County deputies met Jones outside the house, where the truck was parked with furniture caught in the bumper.

"The police came out here, I told them I needed air conditioning," Jones told WGCL "They said, 'open a window.' I told them it wasn't enough. As you can see, I had a nice breeze."

The Coweta County Sheriff's Office said he won't face charges because he damaged his own property, and nobody was hurt.