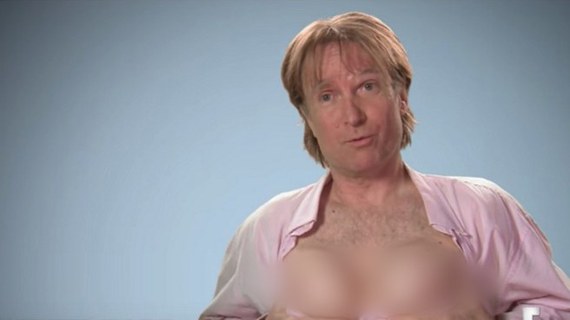 People can be persuaded to do the strangest things if the price is right. Case in point: this man, who got breast implants after making a 6-figure bet with his friend.

Say hello to Brian Zembic and his $100,000-boobs. Zembic is Canadian a magician and professional high-stakes gambler specializing in blackjack and backgammon. He's also a man who, apparently, is unable to walk away from a bet.

This particular bet was made back in 1997 during a vacation in Europe. "I was with two friends and his girlfriend at the time was flaunting her boobs," Zembia explains. "And I said to my friend, 'If I had boobs like hers I could get just as much attention as she would.'"

Instead of accepting it as an observation, Zembic's friend asked how much money he'd have to me offered in order to prove it. Once they agreed on the $100,000 price, Zembic went back to the States and visited a plastic surgeon, who was also a gambler, in New York. After winning a few games of backgammon, Zembic got himself a free pair of implants--38C to be precise.

Almost 20 years later, Zembic still has them -- mostly because, as a part of the original terms of the wager, he gets an additional $10,000 for every year he keeps them. Still, he admits that they've grown on him.

College life, without the class. COED is the source for everything college, university news, girls and sports.