The day before Hazel Basilio learned she had ovarian cancer, she was doing what she loves: playing basketball as a member of the Guam Women's Masters team.

That was on Aug. 26, 2014 -- a little more than two months ago -- but for 43-year-old Basilio, it undoubtedly feels like a lifetime. Following her diagnosis the next day, Basilio had to buy a last-minute plane ticket from Guam to Los Angeles for specialized treatment, leaving behind the island and the people she loves.

Fortunately for Basilio, she has an ally in her cousin Odeen Domingo. Five days ago, Domingo launched a "Team Hazel" fundraiser for his birthday on GiveForward, asking family and friends to help pitch in for Basilio's medical expenses in lieu of giving him birthday presents.

"Today is my birthday. But I am giving it up for someone I truly love. My cousin Hazel has just been diagnosed with ovarian cancer. So instead of gifts, a party, happy birthday wishes, I ask that you give what you can in the crowdfunding campaign I created to help with Hazel's medical bills. To go with the birthday theme, you can give as much as your age or double it or triple it."

"Hazel’s ordeal has, of course, hit me pretty hard personally," Domingo told The Huffington Post, explaining his inspiration. "What Hazel has had to go through and continues to go through. So 'giving up' my birthday to try and help in some way was a no-brainer." 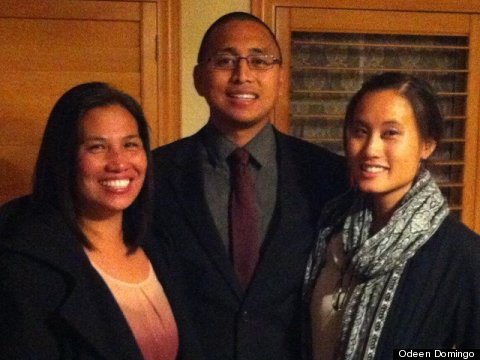 When she's not playing or coaching high school basketball, Basilio teaches U.S. history at the John F. Kennedy High School in Tamuning, Guam. Despite all she's been through, she can't stop thinking about her students. "She has two honors classes," Domingo said. "She was worried about them because she wasn’t there."

So far, says Domingo, he's been floored by the outpouring of support for his cousin. To date, the campaign has raised nearly $5,500 from 61 donors.

"I don’t know what to say," a thankful Basilio said, according to Domingo. "So many people have donated. And they don’t even know me." He added that she's been overwhelmed by the response, but was keen to read each donor's name and the messages left for her on the fundraising page.

"There is no way I would have thought that people would be so kind and generous to give as much as they have. Or to give anything, period," Domingo said. "The show of kindness and generosity still blows my mind."

To learn more about Team Hazel or to make a donation, visit the GiveForward fundraising page here.

This Man Ditched His Birthday, Asked People To Donate To His Cousin's Cancer Fund Instead
Random Acts Of Kindness