Man-made earthquakes associated with wastewater disposal wells from oil and gas extraction are on the rise in parts of the United States, according to a report the U.S. Geological Survey released Thursday.

The report, which the USGS says is the first to try to predict the likelihood of this type of earthquake, identifies 17 areas in eight eastern and central states that have seen a rise in man-made earthquakes since 2009. The report also incorporates the effects of human activity into earthquake hazard models used to assess risk for insurance and building regulation purposes.

“These earthquakes are occurring at a higher rate than ever before and pose a much greater risk to people living nearby," Mark Petersen, chief of the USGS National Seismic Hazard Modeling Project, said in a news release.

The report, which draws on the conclusions of a November 2014 workshop co-hosted by the USGS and the Oklahoma Geological Survey, only examined Alabama, Arkansas, Colorado, Kansas, New Mexico, Ohio, Oklahoma and Texas. 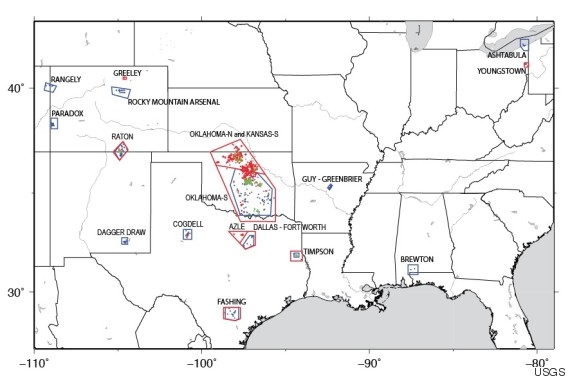 The USGS said these frequent man-made earthquakes "greatly" increase the overall earthquake probability for Oklahoma and the other affected areas compared to the probability in the latest National Seismic Hazard Model, published in 2014. The national maps, which are updated every six years, detail the hazard levels for naturally caused earthquakes in the U.S.

Man-made earthquakes were intentionally left out of last year's model because of how difficult they are to predict, the new report explained. Typical national models forecast earthquake likelihood over a 50-year period, but Thursday's report introduces models that offer only a one-year time period for assessing risk. These short-term models, which the agency hopes to finalize later this year, should be useful because of uncertainties surrounding the wastewater injection wells believed to cause man-made earthquakes.

These injection wells, which number in the tens of thousands in some states, are frequently used to dispose of the chemical-laden saltwater produced during oil and natural gas extraction. The wastewater is injected thousands of feet underground to avoid contaminating freshwater sources. The fluid can then lubricate underground faults, lessening the friction between them and triggering an earthquake.

With the boom of the U.S. oil and gas industry in the past decade, and the increased use of horizontal drilling and hydraulic fracturing, or fracking, techniques, has come a rise in the number of active injection wells. There has been evidence of these wells leaking, as well as inducing seismic activity.

The report relies on previous research into increased earthquakes, and accepts the conclusion that human activities like disposal wells do contribute to the greater number of quakes, but does not explore the exact causes of these quakes. Rather, the researchers "try to find a way to quantify the associated hazard." 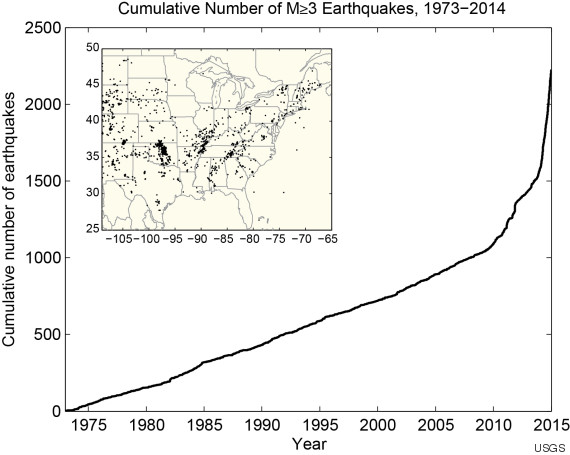 The number of earthquakes with a magnitude of 3 or greater in the eastern and central U.S. have increased in the recent decades with a sharp uptick in the past few years.

Oklahoma, the most seismically active of the lower 48 states last year, has also seen the greatest increase in earthquakes, with 585 earthquakes measuring magnitude 3 or higher in 2014. Earthquakes of magnitude 2.5 to 3 are usually the smallest that can be felt by people.

“We think society can manage the hazard,” USGS geophysicist William Ellsworth told the Los Angeles Times. “We don’t have to stop production of oil and gas, but we think we can do so in a way that will minimize the earthquake hazard.”

Earlier this week, the state of Oklahoma acknowledged injection wells' role in recent seismic activity, reversing years of skepticism. A new state-run website called "Earthquakes in Oklahoma" says it is "very likely" that the "majority" of recent earthquakes in parts of that state were "triggered by the injection of produced water in disposal wells."

Oklahoma now sees two and a half earthquakes every day that are magnitude 3 or greater, according to a report from the Oklahoma Geological Survey. Before 2008, the state saw an average of only one and a half quakes per year above magnitude 3. The current average is now 600 times greater than it was before 2008.

"These rates and patterns of seismicity are very unlikely to represent a naturally occurring rate change and process," the OGS wrote in Tuesday's report. The agency acknowledged that the injection of leftover water from oil and gas operations is likely the primary cause of the increased earthquake activity, but said wastewater from fracking specifically "represents a small percentage of the total volume" of oil and gas wastewater in Oklahoma.