A Russian performance artist was hospitalised Sunday after stripping naked and nailing his testicles to a Red Square cobblestone in protest against the Kremlin's crackdown on political rights.

A video of the graphic action, available on Russian websites, showed artist Pyotr Pavlensky sitting naked outside Lenin's Mausoleum being covered with a blanket by police officers while horrified passersby looked on.

The state-run RIA Novosti news agency said Pavlensky was taken to a police station after being treated in a central Moscow clinic.

The Saint Petersburg-based artist said in a statement posted on the Grani.ru website that he was trying to draw attention to Russian society's inaction in the face of the development of a "police state".

It is not the first time the 29-year-old has resorted to eye-watering methods of protest.

He has previously sewn his lips together to demonstrate against the jailing of two female members of the Pussy Riot punk band who staged an anti-Kremlin performance inside Moscow's main cathedral in 2011.

He was also arrested after wrapping his naked body in barbed wire outside a Saint Petersburg government building in May. 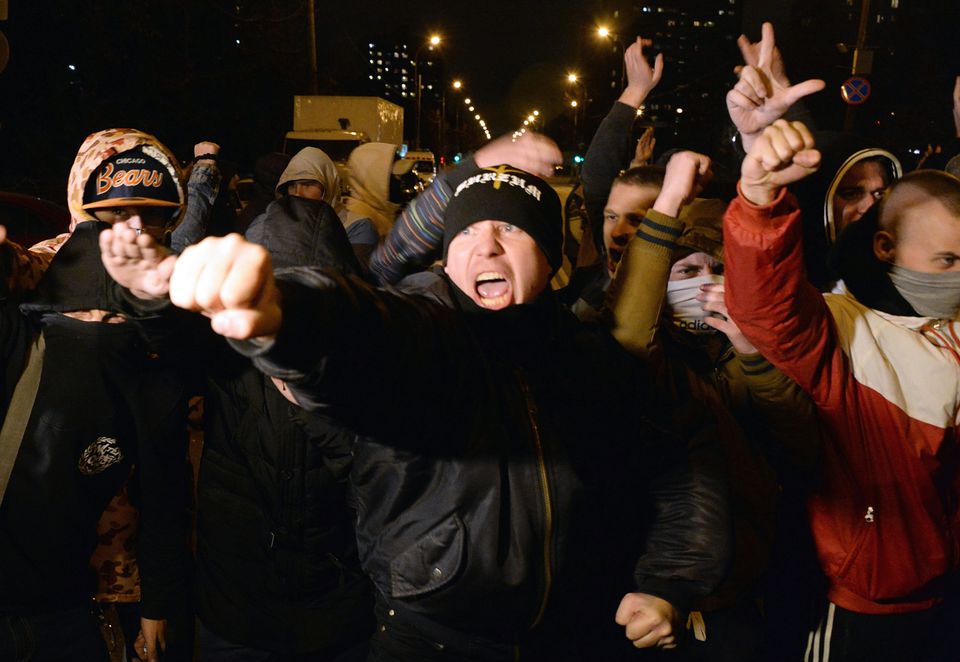 1 / 9
Russian ultra-nationalists shout slogans during a protest in the Biryulyovo district of Moscow, late on October 13, 2013. Moscow police were on October 14, 2013 holding almost 400 people under arrest after the Russian capital was rocked by some of its worst ethnically-fuelled rioting in years, sparked by the killing of an ethnic Russian allegedly by a Muslim migrant from the Caucasus. An initially peaceful protest in the Biryulyovo district of Moscow to protest the killing of Yegor Shcherbakov, 25, rapidly descended into bloody clashes with the police that left the glass doors of a shopping centre smashed and cars upturned. AFP PHOTO / VASILY MAXIMOV (Photo credit should read VASILY MAXIMOV/AFP/Getty Images)
Getty Images