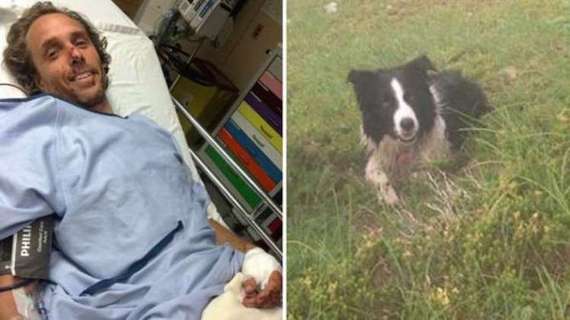 Reid Roberts, 46, and his dog Pacer, a border collie, were jogging through Forest for the World, a park in Prince George, BC. As they were jogging, they accidentally came across a black bear mother and her two cubs in the nearby bushes. Although this wasn't the first time that Reid and Pacer had come across a black bear, this encounter was different.

Whereas the bear from two years before had been further away and only made a bluff charge, this momma bear "came out right away in attack mode," Reid wrote on his Facebook page.

She locked in on me right away with head down staring at me.

This one was way too close. She had no option for a bluff. It was a bit surreal when I realized she wasn't going to stop and I remember thinking 'she is going to attack.'

I was yelling hard and waving my hands as I was backing up. I never wanted to turn or turtle and knew I had to fight... I'm not sure how I ended up on the ground off the trail but I remember her swatting at me like dogs do with their front paws when playing with another dog. I just started kicking at her while I was on my back.

But just like the black bear was protecting her two cubs, Pacer the faithful border collie wasn't about to let her owner get mauled and killed. Pacer, outweighed by over 200 pounds, began attacking the black bear. The bites distracted the bear for a short while, but it wasn't enough.

"[The bear] went at [Pacer] for only a second to chase him off but quickly turned and came at me a second time," Roberts wrote, saying he tried to find protection in a clump of willows. Reid began thinking that "this was it" and that the bear's second attack would finish him off for sure.

Thankfully, that wasn't the case. Pacer attacked again, this time convincing the bear to chase after her down a trail.

Meanwhile, Reid's hand was all messed up from trying to fight the bear off. He had to wrap his hand in a shirt, dial 911, and walk back down the same path both the bear and the dog ran down.

When he finally made it to the parking lot, Roberts came across two people who asked if he was OK.

"They asked if I was ok. I said no, but I need to find my dog. The ambulance was on its way and I didn't want to leave until Pacer was found," he wrote.

Everything began to go blurry after emergency responders and Roberts' friend arrived on the scene, he wrote. Roberts was treated at a local hospital and received 16 stitches in his hand. He also suffered "minor claw marks" on his stomach and arm, he wrote [source].

As for Pacer, after saving its owners life and taking off down the trail, the smart border collie posted up at one of Reid's friends' houses. Sadly, the mother bear was euthanized--probably because we can't have bears who realize they're capable of killing people just walking around.