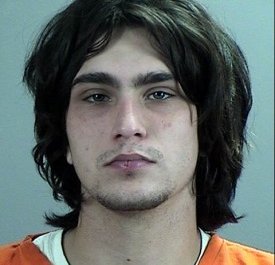 A Minnesota man smiled for the camera and licked his lips after brutally beating his girlfriend's dog, police said. That's when he allegedly fatally shot the animal and left it in a ditch.

Sather smiled and licked his lips on video before killing Draco, a Shiba Inu huskey, according to a criminal complaint obtained by the publication. During the October incident, Sather allegedly slammed the dog on a concrete garage floor before beating the animal, then took Draco outside where he fatally shot him.

Andrea Godfrey, 21, was alerted that her dog had been found dead in a ditch. Sather allegedly told her that the dog had probably been mistaken for a coyote and shot.

But two months later, a suspicious Godfrey checked the suspect's computer, where she found video evidence of Sather killing her pet, according to the complaint.

More from the Star Tribune:

Sather added in a few kicks to Draco and thwarted the pet’s repeated efforts to run away, dragging the yelping animal back before the camera to continue an assault that left “large amounts of blood on the floor.”

Sather closed out the video by moving close to the camera, smiling and saying, “This ain’t done yet.” He then licked his lips.

A second video showed Sather kicking the dog. It’s in the third video that Draco’s death was recorded. Sather held a silver pistol, the dog prone in a patch of grass. Sather was yelling and pointing the gun at Draco.

Godfrey quickly captured the video on her cellphone and took the information to police. When cops searched Sather's home, they found the pistol shown in the video used to kill Draco, police said, according to the Princeton Union-Eagle.

“The torture, it shocks the conscience,” Sheriff’s Capt. Scott Fildes told the Star Tribune. “[The video] was extremely difficult to watch.”

A page titled "Justice For Draco" has more than 10,000 likes on Facebook. Almost 25,000 people have signed an online petition asking that Sather be prosecuted to the fullest extent of the law.

Sather has been charged with felony animal torture and remains in jail with a $250,000 bail.