To support his ailing wife and earn a paycheck, a 61-year-old Iowa man sometimes walks 35 miles to his job as an overnight janitor. Steve Simoff told the Des Moines Register that he leaves his basement apartment in a small town by the Missouri border by 3:30 p.m. to get to the Lakeside Hotel and Casino in Osceola where he works for $9.07 per hour; his shift starts at 11 p.m. His wife suffered a stroke nine years ago and some days there just isn't enough money to put gas in the couple's 2002 minivan. Moving closer to his job would likely mean paying more than he now does in monthly rent -- $400 -- he told The Register.

Family and having a job are "the two most important things I can think of," Simoff said, explaining why he walks to his job. "That's my idea of a responsible person," he said, adding, "I'm not saying everybody should try it." He and his wife, Renee, adopted their now-22-year-old grandson, who also lives with them. Grandson Steven, 22, who has been unemployed since January, calls his grandfather his hero. When Steven worked an overnight warehouse job for several months, the extra money meant the two of them could put gas in the minivan and carpool. 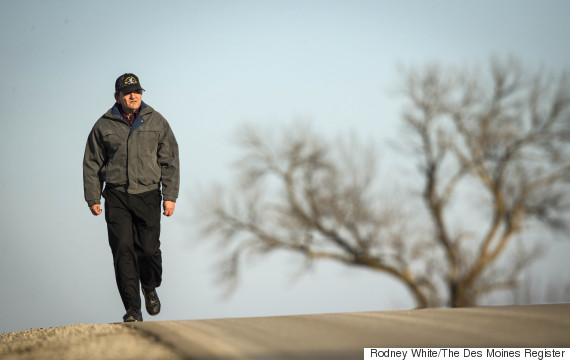 Simoff doesn't hitchhike, although some regulars along the route do stop to offer him a lift. He gets a lift home from a co-worker, who drops him off about 8 miles from home. But Simoff doesn't seem to mind, according to The Register's story. He describes the walking route as "picturesque" and sounds like he enjoys passing the cows and fields along the way. He's done the walk in all kinds of weather, including snow. It is a little dangerous, he said, because trucks frequent Interstate Highway 35, whizzing past him at 70 miles per hour.

The Decatur County Sheriff's office confirmed that deputies also give Simoff rides when they can. A spokeswoman told The Huffington Post that she believed the Simoffs no longer have a phone. The number she provided was disconnected. The Huffington Post left messages for Mrs. Simoff and the couple's grandson on Facebook.

If Simoff's story has a familiar ring to it, it's because last month there were stories written about a Detroit man who for years has been walking 21 miles round trip through city streets to and from his factory job. The media attention got James Robertson, 56, $350,000 from a GoFundMe campaign and a new Ford Taurus. The publicity, though, also led to Robertson moving from his home to avoid being targeted by scammers and beggars. He also reported receiving death threats.

We wonder what the Internet holds for Simoff.