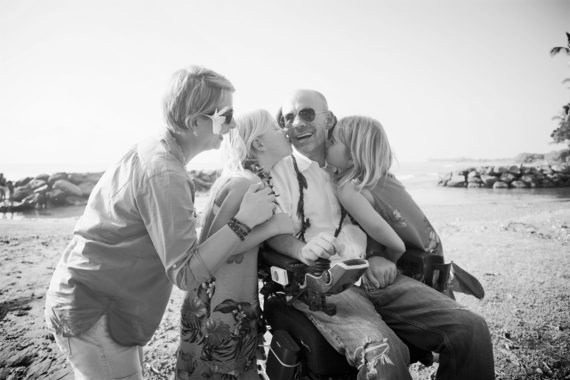 In 2014, 36 year-old Austin, Texas man was given less than two years to live. He was diagnosed with Amyotrophic Lateral Sclerosis, commonly referred to as Lou Gehrig's Disease. Now confined to a wheelchair, unable to walk, eat, use his arms, or speak, he is making a public plea to be turned into a robot.

I decided to visit Jay Smith in the Austin home shares with his wife, two young daughters, and slightly annoying chihuahua to understand more about his bizarre public request. Smith - who speaks through a computer - used his eyes to type his predicament, "Even though I can no longer command my muscles to move any part of my body, I am otherwise very healthy. My mind is sharper than ever. It seems like such a waste to die." Smith is hoping his public plea will reach the right scientists who specialize in robotics.

I ask Smith where he got this idea and his eyebrows raise with excitement as he types his response. "RoboCop came out like thirty years ago so they [the scientific community] obviously know how to do it," he exclaims as he feverishly types with his eyes. "I don't understand why no one else has been turned into one?" Smith, who seems of very sound mind, appears to have quick wit and deep intelligence, and who was recently forced to retire as CEO of the music tech company Livid Instruments, is strangely oblivious to the difference between technology in movies and in real life. 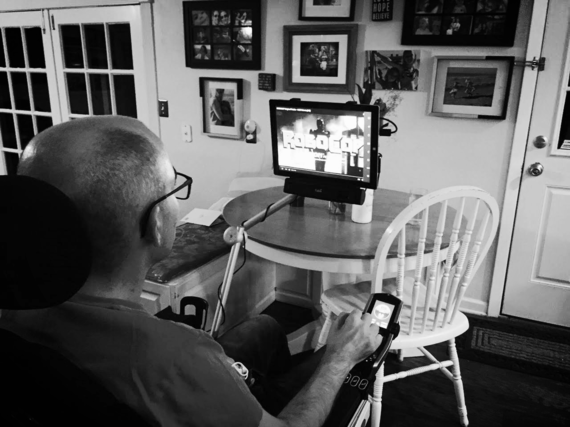 We move into his kitchen so his eight year old daughter can feed him through a tube that connects through his abdomen. He explains why now he wants to become mostly robot, "It's been 75 years since Lou Gehrig died and there is still no treatment. Even with the massive influx of cash from the Ice Bucket Challenge in 2014 the ALS Association can't figure out what to do and is still sitting on most of it. We've pleaded with the FDA to change the outdated rules for testing experimental drugs but they really don't care about rare diseases. Obviously the medical community isn't in a rush to cure it, so I figure what the heck." 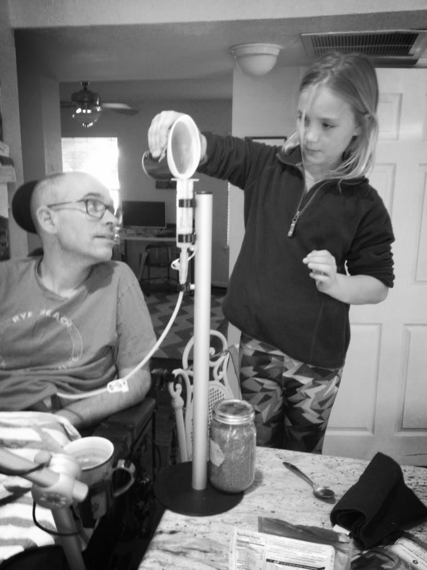 Smith, who is already surrounded by technology he has made himself to control things his environment with his eyes, describes what he would do with his robotic body. "Mostly boring stuff like gardening, helping my kids with their homework, and driving them to soccer practice, but if part of the deal was I had to fight crime or do appearances at kid's birthday parties and stuff, that would be totally fine with me."

Smith shares with me that he has been trying to get a hold of Hollywood engineers before it's too late. "My daughter starts first grade next year and I'm shooting to be alive so I can see her walk her into school on the first day. I'm hoping a Doc Brown type will hear about my story and be able to help me out. Ideally I'd like to keep most of my body and augment it with robotics, but I know beggars can't be choosers so I'd settle for a C3PO type deal. I just want to look somewhat human. After a long pause, his eyes fill with tears and he turns to his wife who is the only one who understands his very slurred speech and says, "I just want to live to see our girls get married, if medicine can't help us, maybe technology can."

Smith says anyone who wants to take on his challenge can reach him through his Facebook page. Others who want to help but can't turn him into a robot can sign his change.org petition to urge the FDA to allow him access to experimental treatments here.

*Disclaimer -- This is a satirical story written by the author about the author to illustrate the reality of living with an untreatable disease in the year 2016. I am fully aware that RoboCop isn't real, however I would not turn down the chance if it presents itself.